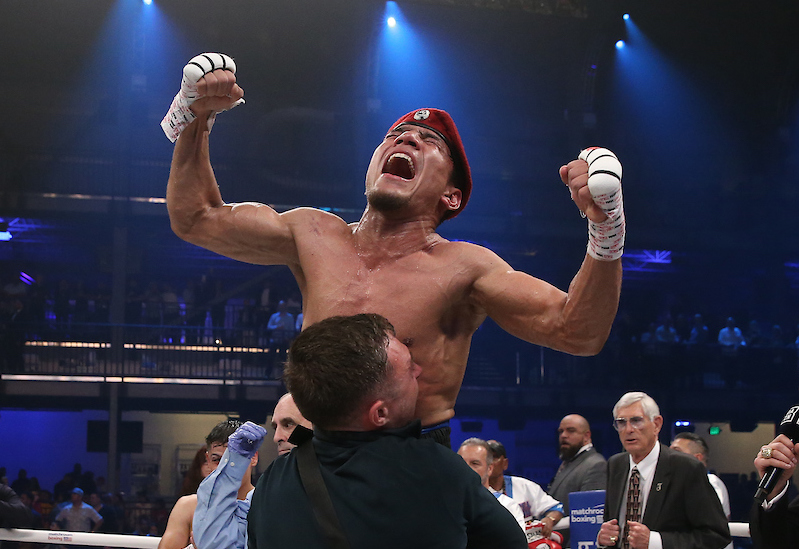 Boxing is flying in Uzbekistan and three Matchroom Boxing stars lead the way in the shape of Murodjon Akhmadaliev, Israil Madrimov and Shakhram Giyasov – and the trio star in Matchroom Boxing’s latest YouTube feature.

Boxing is getting back into the groove on both sides of the Atlantic with Matchroom Boxing set to announce the first run of UK shows tomorrow and America hot on the heels, and all eyes will be on when fans can see Akhmadaliev, Madrimov and Giyasov back, with all three gaining great momentum before the COVID-19 pandemic struck.

Akhmadaliev (8-0 6 KOs) kicked-off 2020 in a toe-to-toe unification war with Daniel Roman in Miami in January. Akhmadaliev was going for personal and national history in the bout, looking to equal Leon Spinks’ record of becoming a men’s unified World champion in just his eighth pro fight and will become the first unified ruler from Uzbekistan.

The crowd-pleasing battle went the distance, snapping ‘MJ’s’ streak of fourth straight KO wins going into the bout, but the 25 year old got the all-important win via split decision to create history and he’ll be eager to return and target more belts as he aims for undisputed status at 122lbs.

Madrimov (5-0 5 KOs) burst onto the pro scene in style on his debut in November 2018 when he picked up the WBA Inter-Continental Super-Welterweight strap, and he hasn’t looked back since.

The 25 year old called time on a glittering amateur career following gold medals at the 2017 Asian Championships and 2018 Asian Games, and is now on the cusp of World title action having won all five of his outings inside the distance and rated #2 with the WBA, with his latest being in Matchroom Boxing’s last show in the States before the pandemic hit, stopping Charlie Navarro in six rounds in the third defense of his belt.

Giyasov (9-0 7 KOs) was similarly decorated in the amateur ranks as Akhmadaliev and Madrimov, following up a silver in the 2016 Olympics with golds at the World and Asian Amateur championships in 2017.

After racing to 7-0 from his March 2018 debut, the 26 year old picked up his first pro title in April 2019 with victory over Emanuel Taylor in California landing him the WBA International Super-Lightweight title, and his first defense certainly saw the boxing world stand up and take notice as he obliterated former World champion Darleys Perez inside 30 seconds of the fight.

Akhmadaliev, Madrimov and Giyasov have become ‘must-see’ attractions in boxing, and promoter Eddie Hearn cannot wait to see what the future holds for the trio as the sport gets back on its feet following the pandemic.

“MJ, Israil and Shakram are such talented and exciting fighters,” said Hearn. “I would love to see MJ go for all the belts at 122lbs, while World title action is not far away for Israil and Shakhram – they all have the world at their feet and I hope that we can one day do a huge show in Uzbekistan too.””We’re thrilled that boxing is back and can’t wait to have

“MJ, Israil and Shakhram return to battle as they continue their rise to the top of international boxing,” said Vadim Kornilov of World of Boxing. “All three are very thankful for the support of their huge fan bases in Uzbekistan, the United States and all over the world.”
Andrei Ryabinskiy of World of Boxing said: “We are very glad with the way the careers of these young boxers have been going and we look forward to Giyasov and Madrimov following in MJ’s footsteps towards their world titles!”