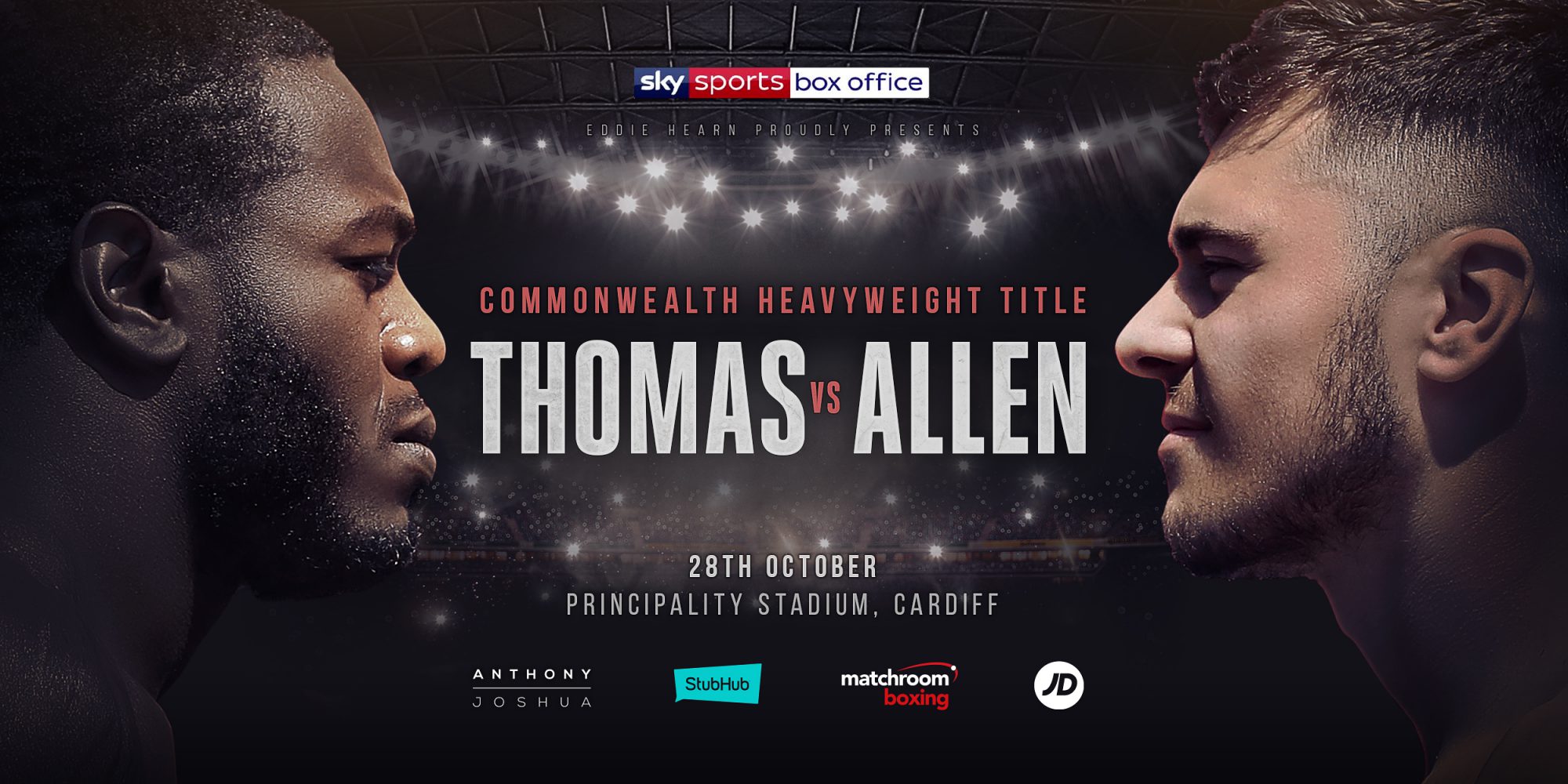 Lenroy Thomas and Dave Allen will rematch for the Commonwealth Heavyweight title at the Principality Stadium in Cardiff on Saturday October 28, live on Sky Sports Box Office.

The pair clashed for the strap in Sheffield in May, with Thomas edging out Allen via split decision at Sheffield United’s Bramall Lane ground.

The Florida-based Jamaican comes to the UK for an immediate return with the Doncaster fans’ favourite, and the champion expects another great night in a huge stadium show, where he wants to stake his claim for bigger things in 2018.

“I’m looking forward to defending my title against Allen in Cardiff,” said Thomas. “He was a gentleman after the fight and I feel he deserves the rematch.

“As a champion, I have no issue fighting in his backyard again. The 75,000 fans in the stadium can’t fight for him.

“It’s a pleasure to appear on another Matchroom card, especially with the main event featuring Anthony Joshua defending his World Heavyweight title. It should be another electric night and I’m looking to continue my reign as the Commonwealth Heavyweight Champion. My goal is to crack the top 15 world ratings after this fight and move toward a World title.”

Allen is gunning for revenge though and ‘The White Rhino’, who stopped Tom Dallas in three rounds in Essex in July to claim a 12th pro win, says defeat is unthinkable in his fourth spot on a huge Sky Sports Box Office bill.

“Since the result was announced in Sheffield, this is all I’ve wanted,” said Allen. “It’s all I’ve thought about in my spare time. I want to right that wrong. It haunts me, it was my night but I blew it and he fought out of his skin.

“I’ve watched the fight numerous times back. I underestimated Lenroy. It wasn’t the best fight in the world. It was quite physical and draining. He proved to be a tough man. I scored it very close, I did the forcing but he did the quality, eye catching work – It’s what you like but I have no arguments with the decision.

“I know what I’m up against now, it’s about putting the working in the gym. He took my night away from me, now I’m going to take his belt. There’s only one result this time. He’s woke up the beast. I’m a different animal all together now.

“I thought he would fold in the later rounds but he didn’t. Looking back, I took my foot off the gas in training in the build-up too. You can make a mistake once and you are a fool, but if you make the same mistake twice you are an idiot. It won’t happen again.

“‘The White Rhino’ is a Box Office Superstar. Four times in ten months, I’m living the dream but this time it’s my last chance. If I don’t win, where do I go from here? I don’t want to face that.

“It’s my first time fighting abroad! The support will be massive as always. It means a lot to me, there will be a very strong South Yorkshire contingent in Cardiff. They will take that Principality Stadium roof off with their noise.

“I needed a win and didn’t want to come into this fight off the back of a loss. So, we got back out quickly and got a win under our belt against Tom Dallas.

“For this fight, I’ll come in around 16 ½ stone. I was fit and in shape as an amateur and I haven’t been like that since I turned pro. There was a lot of fuss made when I was a kid with people saying I can fight. I’m going to get in shape for this fight.

“I’ve made a promise to myself and to my Dad, who has not been very well, he said to me: ‘This is it. This is your last chance’ – that’s struck a chord with me. On October 28 I’m going to perform my heart out. If I don’t my career is finished.”

Thomas and Allen’s rematch is the second fight to be added to the undercard of Anthony Joshua MBE’s World Heavyweight title defence against Kubrat Pulev after yesterday’s announcement that Kal Yafai will defend his WBA Super-Flyweight title against unbeaten mandatory challenger Sho Ishida.

Tickets go on sale to Matchroom Fight Pass members at midday on Monday September 11 via www.StubHub.co.uk

Tickets go on general sale at midday on Tuesday September 12 via www.StubHub.co.uk