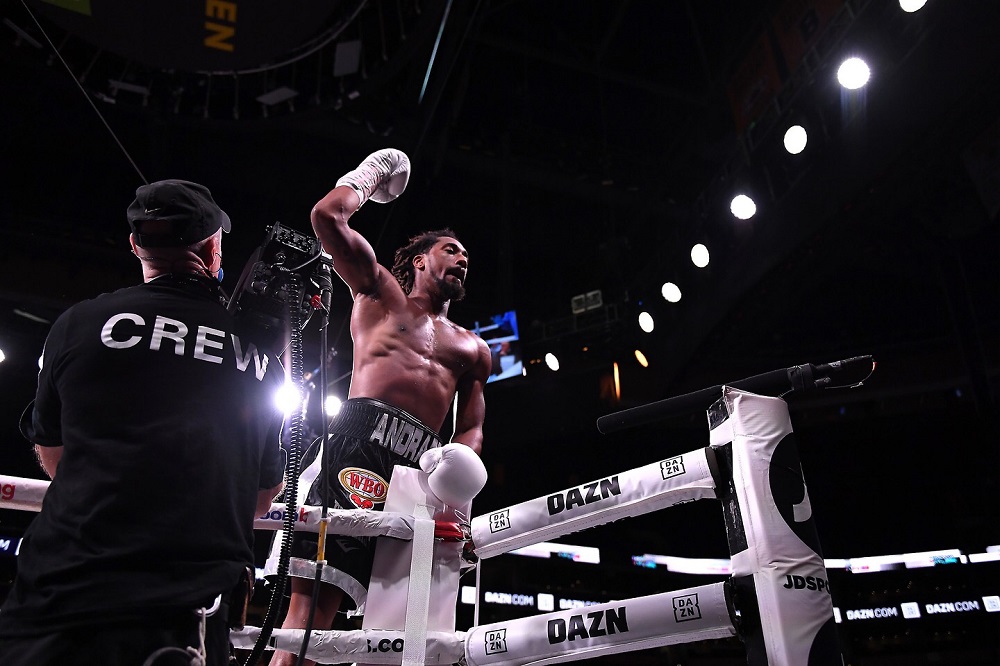 Andrade: Being Active Will Make Me Even Better

Demetrius Andrade believes being active will bring the best out of him as he prepares to defend his WBO World Middleweight title against Artur Akavov at the Hulu Theater at Madison Square Garden, New York on Friday night, live on DAZN in the US and Sky Sports in the UK.

Andrade (26-0 16KOs) puts the crown on the line for the first time since claiming the vacant belt in Boston in October, flooring number two ranked Walter Kautondokwa four times en-route to a comprehensive points win.

The Rhode Island ace is back in action against the dangerous Russian Akavov (19-2 8KOs) 90 days after that win – the quickest turn around in fights for the 30 year old since the spring of 2012 and his 16th and 17th fights.

‘Boo Boo’ is thrilled with promoter Eddie Hearn for getting him back into action so soon and feels activity will make him an even better champion in the talent-rich 160lbs division.

“It feels great to be out so soon – it’s the first time that has happened to me for so long,” said Andrade. “It used to be eight months or once a year, so it just goes to show the difference between the levels of promoters that you go with.

“Eddie Hearn is keeping me active and he knows that the more active I am the better the fighter I am. Eddie wants to make a statement, show people that the way it’s done in the UK is how it should be done in the US, he’s young and I am too – we have the same hunger, he wants to be the top promoter and I want to be the top fighter. Knowing I can be one of the leading fighters on DAZN and they are doing a great job all around.

“I had the shitty end of the stick for a long time but I can always see the bigger picture. If I look to quit through that, I can’t inspire or motivate others. I’m undefeated, 2008 Olympian, and everyone has their time and obstacles to get over.

“I’m still clearing my path now, everything good in my way stays and everything bad has got to be moved. I’m happy to be back in so fast, I could have had a tune-up fight or even two and not signed up to fight Billy Joe Saunders for the title, but [mrb_quote]I have been in the game too long and it’s my time to shine now so I am not going to stop.

“I’m not satisfied. I’ve always been at the top but now I’m growing in the top of the mainstream. The boxing world knows I’m the baddest man out there but not having the right promotion behind me putting me out there has hurt me and that’s why I’ve made the changes and Matchroom and DAZN know what I can bring and they can move me to the next level – my job is to win.”

Long Island favorite and former World ruler Chris Algieri (22-3 8KOs) steps up his pursuit of regaining his World champion status at Super-Lightweight as he faces fellow New Yorker Danny Gonzalez (17-1-1 7KOs), One of Matchroom Boxing USA’s rising stars tastes his first action in 2019 on the card as Reshat Mati (2-0 1KO) returns to the scene of his last outing in October where the ‘Albanian Bear’ went the four round distance in his second fight.