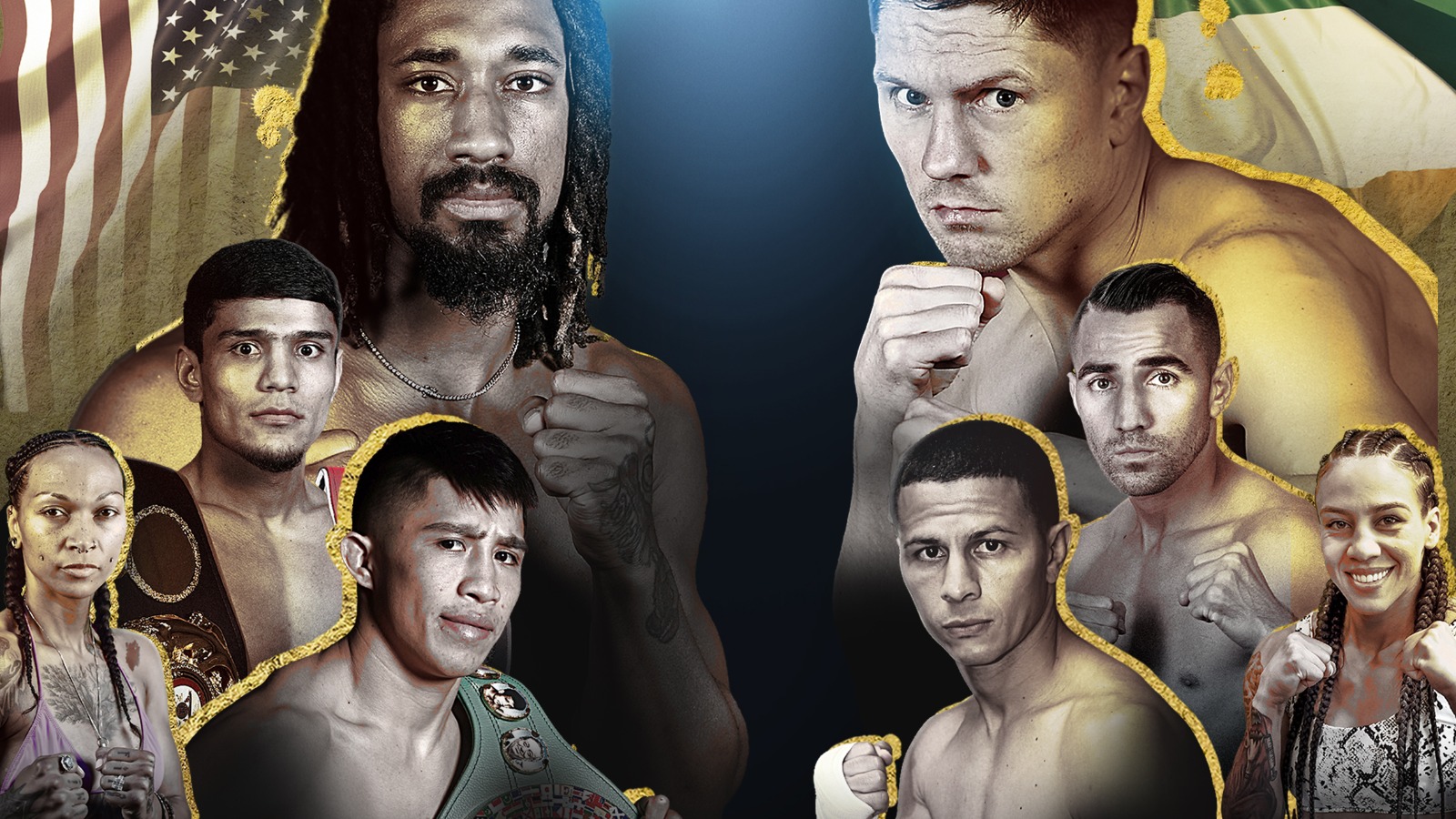 Demetrius Andrade will top a World title quadruple-header as he defends his WBO World Middleweight against Jason Quigley at the SNHU Arena in Manchester, New Hampshire on Friday November 19, live worldwide on DAZN.

Andrade (30-0 18 KOs) puts his crown on the line for the fifth time and the Rhode Island star will be looking for a statement win as he hunts the unification blockbusters with his fellow belt holders at 160lbs. The 33 year old, who picked up the vacant strap in his first fight with Eddie Hearn in Boston in October 2018, will make it five straight fights with European challengers when he steps through the ropes against Quigley.

Quigley (19-1 14 KOs) moved into prime position to land a World title shot in May by beating Golden Boy stablemate Shane Mosley Jr by majority decision in a thriller in Las Vegas, and the former amateur star becomes the second Irishman to challenge ‘Boo Boo’ after Luke Keeler took on the WBO ruler in Miami in January 2020.

On November 19 though I show him that there are levels to this game.

“November 19, it’s me again,” said Andrade. “Jason Quigley, world rated, good amateur pedigree, decent skills, comes to fight, and hats off to him, he’s actually willing to step in the ring with me, which you can’t say for any of these other so-called top guys. On November 19 though I show him that there are levels to this game.

Just keep winning, that’s all I can do. Go in there, handle my business, do my job, look sensational, come out healthy and then it’s onto the next. If you have a belt at 160 or 168 lbs, let’s go. Put the politics aside, have your people call Eddie. Let’s get down to business. Charlo, stop running your mouth, making up excuse after excuse. You’re a fighter, let’s fight bro. GGG, where you at? Unify against Murata and then let’s put the three belts on the line next year.

“Canelo you going to run up to 175? Cool, I can meet you there, no problem. First things first though, I need to go out on November 19, defend my championship belt, and put on a spectacular performance, and that’s exactly what I plan on doing.”

I’ve worked my whole career to get into this position of becoming world champion.

“I’ve worked my whole career to get into this position of becoming world champion,” said Quigley. “Demetrius is a great champion but now it’s my time and that World title is coming back to Ireland.”

Akhmadaliev (9-0 7 KOs) was at his spiteful best last time out, putting the challenge of Ryosuke Iwasa to bed in the fifth round of his first professional outing in his homeland of Uzbekistan. ‘MJ’, who became unified champion in just his eighth fight in the paid ranks by ripping the belts from Daniel Roman, puts the belts on the line for the second time in New Hampshire and does so against his WBA mandatory challenger and #1 in the rankings.

Rios (33-3 16 KOs) is in great form heading into his second World title challenge, heading to the east coast on the back of four wins, the latest being the only one to go the distance in February in Indio, California with a wide points win over Oscar Negrete.

“I would like to thank my promoters Eddie Hearn and Andrei Ryabinsky for the opportunity to defend my titles in New Hampshire,” said Akhmadaliev. “I’m living and training in Indio, so I know how people love and appreciate boxing here.

“It will be my second mandatory challenger in a row, he’s a good fighter and I expect it to be a great fight for everybody to enjoy! As always, I’m working hard with my coaches Antonio and Joel Diaz, and we’ll be prepared to defend what belongs to us!”

“Who is the best to beat at my weight class? It’s MJ so I am here to challenge myself with this task and I’m confident in my ability and my team to come out victorious,” said Rios. “On November 19th you will see a new world champion added to the Golden Boy stable”

The third world title fight is pits Mexico vs. Puerto Rico and it’s the long-awaited showdown between Julio Cesar Martinez and McWilliams Arroyo.

Mexican Martinez (18-1 14 KOs) returned to action in typically entertaining fashion in June, stopping Joel Cordova in Guadalajara to successfully defend his WBC World Flyweight title for the third time. It will be third time lucky for the Arroyo clash, with Covid squashing the first attempt to pit them together in Tulsa in May 2020 and then a hand injury to Martinez ruled him out in fight week when they were due to clash on the undercard of Canelo Alvarez’s clash with Avni Yildirim in Miami in February.

Puerto Rican Arroyo (21-4 16 KOs) was able to taste action that night and picked up the Interim title at the home of the Miami Dolphins with a fifth round win over Abraham Rodriguez, and will be desperate to upgrade and rip the full title from Martinez as they finally get to tangle.

“It is great that we are finally able to get this fight,” said Martinez. “We have tried twice to do it but that’s all in the past and now we’re going to go to war on October 16.

“McWilliams is a strong challenger for the belt but I feel fantastic and I am ready to prove that I am the man to beat at Flyweight.”

“This fight has been asked for and the fans will finally get a great battle on November 19,” said Arroyo. “I hope he will come prepared because I am going to be 100 per cent ready and confident that I will be victorious.”

The fourth World title bout on the bill is the second step on the path to crowing an undisputed women’s champion at 140lbs as Kali Reis takes on Jessica Camara for the WBA, IBO and vacant WBO straps.

Two-weight champion Reis (18-7-1 5 KOs) added the IBO title to her WBA crown last time out with a majority decision win over Australian Diana Prazak, and the Rhode Island champion and former WBC Middleweight ruler will be looking to add another title through victory over Camara (8-2), the Canadian that bounced back from defeat to Melissa St Vil with a confidence boosting win over Heather Hardy in May – and the stakes couldn’t be higher with the winner set to face the victor of the with October 30 clash between WBC champion Chantelle Cameron and IBF champion Mary McGee at The O2 in London, England.

“I am in this tournament to collect all of the belts and become undisputed champion,” said Reis. “I want to thank DAZN, Lou DiBella and Eddie Hearn for this tremendous opportunity,” said Kali Reis. “Jessica is a talented fighter, but she will not deter me from achieving my goal. No one will.”

“This is going to be a fun fight for the fans and a great fight for women’s boxing,” said Camara. “Kali will be a tough opponent, but I will be ready. On November 19, I will become a world champion. Thank you to DAZN, Lou DiBella and Eddie Hearn for putting this historic tournament together to crown an undisputed super lightweight champion.”

“This is a fantastic quadruple header of World title action,” said promoter Eddie Hearn. “Demetrius wants to show the other champions that he is the man to beat at Middleweight, so he needs to put on a big performance against a hungry and proud Irish challenger in Jason.

“MJ is one of the best fighters in the world and he’s still in single figures as a pro, I think that we’re going to see a special performance against a tough foe in Ronny. Julio is one of the most entertaining fighters out there right now and there’s nothing less than fireworks expected as he finally gets in there with McWilliams. And finally, Kali and Jessica are one win away from the chance to fight to be the undisputed Super Lightweight champion – this is a night of action not to be missed.”

“This is a fantastic card for fans to enjoy worldwide on DAZN, and a great example of our two partners Matchroom and Golden Boy working together to put on excellent shows,” said Ed Breeze, EVP Rights at DAZN. “Jason Quigley steps up against one of the toughest challenges in the middleweight division, the flawless and reigning WBO champion, Demetrius Andrade. What a night of boxing we have on our hands, and we’re thrilled to deliver this fight to DAZN subscribers on November 19.”

“I am delighted to be able to partner up again with Matchroom to deliver the best fights for fight fans on November 19,” said Oscar De La Hoya, Chairman and CEO of Golden Boy. “Four world titles will be on the line as some of our formable, most exciting fighters take on the toughest challenges of their career to prove they are the best in their weight divisions. First, McWilliams Arroyo, will be is exercising his mandatory challenge for the WBC World Flyweight Championship against Julio Cesar Martinez.

“Next, our very own Ronny Rios, who’s been on a winning streak since 2019, challenges Murodjon Akhmadaliev for the WBA and IBF Super Bantamweight World Titles. Finally, one of my favorite Golden Boy fighters, Jason Quigley will challenge Demetrius Andrade for the WBO Middleweight Title after a stellar performance against Shane Mosley Jr in May. I am fully confident in my fighters coming out successful and am looking forward to adding three new world champions to our Golden Boy roster.”