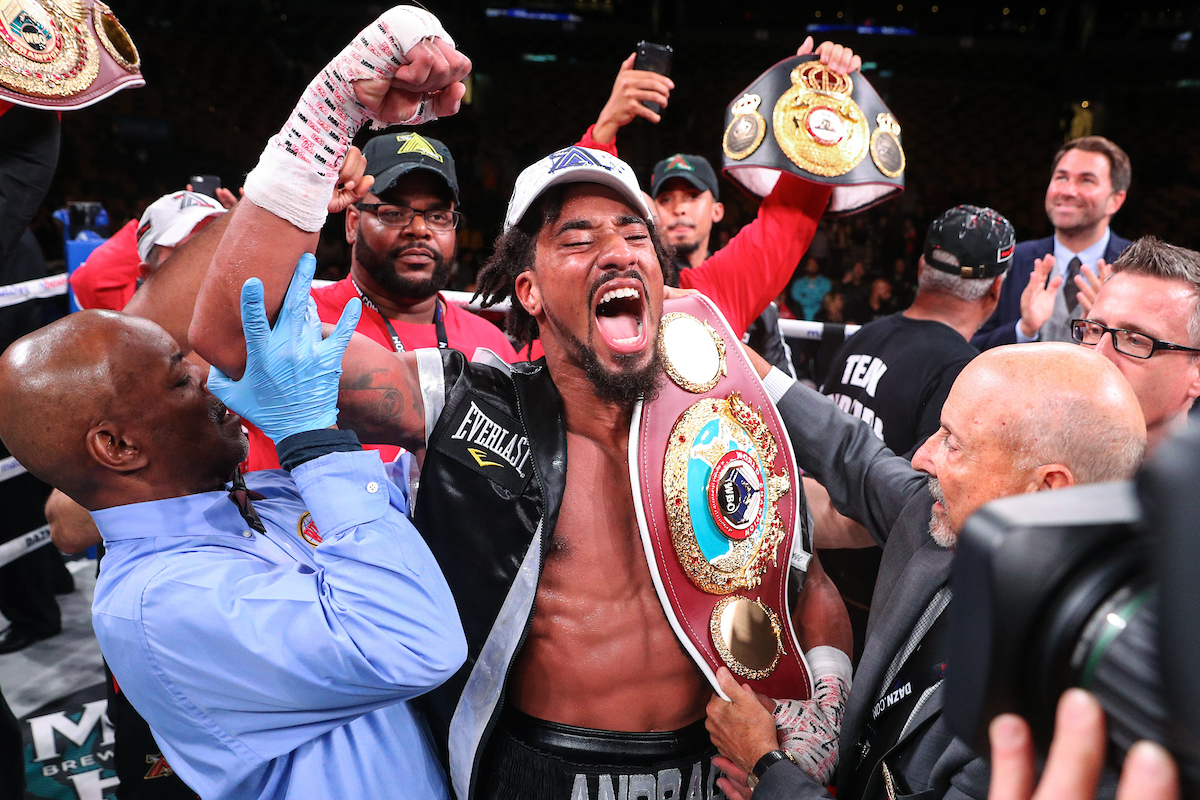 Demetrius Andrade will make the first defense of his WBO World Middleweight against Artur Akavov on a bumper show at the Hulu Theater at Madison Square Garden, New York on Friday January 18, live on DAZN in the US and Sky Sports in the UK.

Andrade (26-0 16KOs) claimed the title in October to become a two-weight World champion, flooring Walter Kautondokwa four times as he comfortably outpointed the tough number African in Boston to land the title. The unbeaten Rhode Island ace had been out of the ring for a year as he boxed in the Massachusetts capital, and ‘Boo Boo’ now wants to become an active champ as he targets unification battles in 2019.

Akavov (19-2 8KOs) will be confident of ripping up those plans as he challenges for the title for the second time, having pushed former champion Billy Joe Saunders all the way in Glasgow in December 2016, being narrowly edged out by the Londoner. The Russian landed the WBO International title in his last outing in May in Latvia, a win that saw him climb to #8 in the rankings with the WBO and move into position to rip the crown from the 32 year old in the Big Apple.

“I couldn’t be more excited about this opportunity,” said Andrade. “Fighting at Madison Square Garden, where so many great fighters have fought is a true honor, and something I have dreamt about my entire life.

“People might not know much about Akavov, but this is a guy who went overseas and gave Billy Joe Saunders absolute hell. Most people thought that he should have won the fight. This is an optional defense, so I could have fought anyone I wanted, but we chose to fight a guy that we know is going to bring it all night long and a guy who in many people’s eyes beat Saunders.

“I know that I have an extremely tough task in front of me, but that’s what this game is all about. I want all the top guys, all the belts and with Eddie Hearn and DAZN behind me and continuing to give me these opportunities to showcase my talent to the world, the other champions can’t hide for long. This is my time and January 18 is another step in that direction.”

“After the fight with Saunders, I was hoping for a rematch because that fight left a lot of unanswered questions,” said Akavov. “I believe that Andrade is a better fighter than Saunders and this is my chance to answer those questions. I understand the weight of the responsibility that is on my shoulders and will give it 100 per cent.”

Promoter Eddie Hearn is lining up a stacked bill in support of the main event, and a second World title bout on the card sees Amanda Serrano (35-1-1 26KOs) gunning for history as she looks to land World honors in an extraordinary seventh weight class as she meets WBC and IBF World Super-Flyweight champion Eva Voraberger (24-5 11KOs) – the Austrian tasked with stopping Serrano’s bid for glory.

“I’m super excited to be able to make history alongside the biggest and best network out now, DAZN,” said Serrano. “Being part of the best makes you want to raise the bar and we will do that together.”

“My next goal is to become the first four-division world champion from Venezuela,” said Jorge Linares. “I accomplished what I needed to accomplish at 135 pounds, and in my last fight with Abner Cotto I showed that I can take my speed and power to this new division.

“We’ve been going back to the basics with my old trainer Jorge Zerpa, and I know I can earn another World title in this new weight class. But first I have a tough fight against Pablo Cesar Cano, a young veteran with a lot of experience who is naturally a super lightweight. I’m expecting a tough fight against Cano, but I’m motivated to give fans a great fight in New York City and on this new platform, DAZN.”

“I want to thank Golden Boy Promotions for giving me the enormous opportunity of fighting a great world champion on Jorge Linares,” said Pablo Cesar Cano. “To repeat, this is a great opportunity that I will not fail to take advantage of. The fans know the kind of fighter I am and that the only way you’ll get me to quit is by taking me out on a stretcher. But I warn everyone: that will not happen.”

“Jorge Linares has been an important staple of Golden Boy Promotions for many years and has established himself as a fighter who can come back from any setback,” said Oscar De La Hoya, CEO and Chairman of Golden Boy Promotions. “He’s beaten some of the best fighters in three different weight classes, and I’m looking forward to his rise in this new weight division.

“Pablo Cesar Cano has also played in important role at Golden Boy, giving tough fights to almost everybody at 140 and 147 pounds. This will be a great fight between two experienced warriors, and I’m delighted that it will be streamed on DAZN.”

Former World Super-Lightweight champion Chris Algieri (22-3 8KOs) made his return from two years out of the ring in November with a ten round win in Huntington, Long Island, and the 34 year old faces fellow New Yorker Danny Gonzalez (17-1-1 7KOs) in his second bout back, with the carrot of major fights later in the year dangling in front of Algieri.

Andrade vs. Akavov is a co-promotion between Matchroom Boxing USA and DiBella Entertainment, and Lou DiBella is confident his charge can rip the title from the champion, and that Serrano will make history.

“Anyone who saw Artur Akavov’s bout with Billy Joe Saunders knows that he is a relentless fighter capable of competing on the big stage,” said Lou DiBella. “Akavov may not be very well known to the average American boxing fan right now, but there is no better way to change that than by beating Demetrius Andrade and no better place than in the heart of New York City.

“There is no doubt that Amanda Serrano is the best pound-for-pound fighter in women’s boxing and one of the most accomplished fighters in the sport, regardless of gender. By fighting for a championship in her seventh weight class, Amanda is again showing her desire to chase greatness. Props to DAZN and Eddie Hearn for believing in Amanda’s talent and providing her this platform.”

“The Middleweight division is on fire right now and Demetrius is a key player,” said Hearn. “He is the one looking to lay down the gauntlet by kicking off 2019 and will be looking to deal with Akavov in style before moving into blockbuster fights.

“It’s a huge show and we are delighted to welcome Jorge Linares to the card. Jorge has boxed on many of our shows in the UK and is a pound-for-pound quality fighter, I love the Maurice Hooker fight in the summer.

“Chris Algieri, who is also in line for Hooker, returns in a local derby and female star Amanda Serrano looks to make history – there’s even more to be announced and fans are going to get plenty of bang for their buck at Madison Square Garden on January 18.”