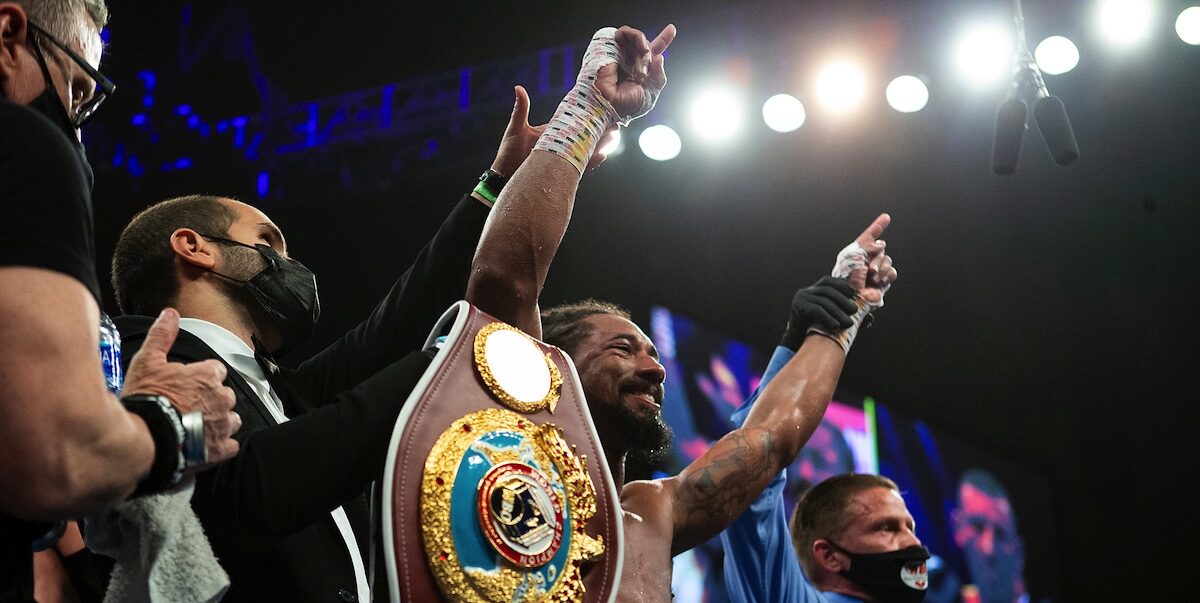 Demetrius Andrade wants his fellow champions to step-up after he defended his WBO World Middleweight crown on points against the spirited challenge of Liam Williams on Saturday night, live worldwide on DAZN.

Andrade made it an unblemished 30 wins from 30 in the paid ranks against the Welshman, getting the win 118-109 twice and 116-111 on the scorecards, and the 33 year old and his promoter Eddie Hearn said it’s time for fellow champions Jermall Charlo (WBC), Gennadiy Golovkin (IBF) and Ryota Murata (WBA) to make unification fights.

“At the end of the day I am a champion,” said Andrade. “I am undefeated. I shouldn’t have to inspire anyone to get in the ring with me for a belt, an undefeated record and a whole lot of money on the table.

“Whenever we can sit down and make something happen, I’m willing to risk it all. I am ready to show that I am the best and to do that, I want to step in with those champions and they have to do the same thing as well.

“I have to go back and watch the fight but listen, Liam is a hell of a fighter, tough, strong, comes to fight and that’s type of fight that people want to see me in. I showed out, I performed the way I needed to do to get the W, and my hat goes off to Liam all day.

“I already know he was tough but getting back up in the second round and showing me he wanted more, it wasn’t a surprise, he’s a dog. He came here to win; he didn’t lay down. I got hit with some hard shots too, we showed me are tough guys that can take shots and give shots and that’s what we did.”

“It was a great fight, massive props firstly to Liam Williams,” said Hearn. “Demetrius has done his job, it’s not his responsibility to convince other champions to fight him. Champions are supposed to fight champions.

“Charlo vs. Andrade is a massive fight, why don’t the champions want to fight Demetrius? He was hurt tonight, he was tired tonight, he can’t make 160lbs forever. If I am GGG or Charlo, I am looking at him and thinking ‘I can beat him’, so why not step-up?”

“Demetrius is a very good fighter, better than I thought,” said Williams. “More slippery than he appears on TV. I couldn’t really get going and get my combinations off because I’d hit him once, and I feel I hurt him a couple of times, but then he would be gone, and I couldn’t capitalize on it.

“I know I am tough, everyone does, and I can take a shot. When I went down, I took a clean shot and taken the best he’s got. He didn’t keep me down, so I had nothing to fear. I don’t feel I am going to take a step back; I am going to stay at world level. Demetrius is the best in the world other than Canelo, I have to give him credit, I gave him some stick in the build-up, but I have nothing but respect for him, he’s quality.”

A textbook one-two down the pipe put Williams on the canvas late in the second round, the exclamation mark on a strong opening for the champion who started like a train. Williams beat the count and weathered a storm, and began to work his way into the fight, having successes of his own towards the halfway point, but Andrade began to land his uppercut in the sixth, a signature shot throughout the bout.

Into the ninth round, Williams had his best moment as he appeared to buzz Andrade but the champion was elusive and the Welshman was unable to capitalize. The Rhode Island star was able to reassert his authority and stretch his lead in the championship rounds and retain his title.

Carlos Gongora broke down Christopher Pearson inside eight rounds in the first defense of his IBO World Super-Middleweight title.

Gongora floored Pearson with a left hand and having suffered damage to his left eye from Gongora’s accurate jab for the duration, Pearson rose but took a knee once again for back-to-back KO wins for the Ecuadorian in the Hard Rock Casino, who was called a ‘dark horse’ in the division by promoter Hearn.

“I feel really happy to defend my title,” said Gongora. “This pandemic has affected us all, boxers with inactivity, so I am so happy to be able to have won the title and now defend it.

“I just followed the game plan. I wasn’t necessarily looking for the KO, because it was more going round by round and looking for opportunities, it represented itself and I was able to win the fight.

“I was really excited to return to where I won the title in December, and more importantly to keep it.

“My focus is always just to get the win, that’s all I can really do, everything else is out of my hands. Hopefully the Canelo fight is one that can be made down the line, that fight would be the cherry on top of the cake.”

Andrey Fedosov delivered a first round KO win over Mahammadrasul Majidov as the Azerbaijan man broke his right ankle after being put down by a heavy right hand by the Russian. Majidov managed to get to his feet but hampered by the injury, he was floored against by Fedosov and failed to rise a second time and had to be stretchered out of the ring.

Alexis Espino is making up for lost time with a second win in 2021 after a frustrating year, picking up a six round points win over unbeaten Ty McLeod. Espino was struck by fight cancellations through COVID in 2020 but after a KO win at the Hard Rock Stadium in February, the 21 year old got the nod on the cards 60-54, 59-55 and 59-55

Arthur Biyarslanov won the battle of the unbeatens and got good rounds under his belt, winning his first eight round clash against Israel Mercado by majority decision, with scores of 78-74, 77-75 and 76-76,

Otha Jones III and Jorge Castenada served up an eight round war and it was Castenada that edged a war via majority decision, 77-75, 76-75 with one judge unable to split them – watch that great clash here.

In the opening bout of the night, Florida’s own Aaron Aponte continued the unbeaten start to his pro career with a fun four round shut-out win over the game Javier Martinez.