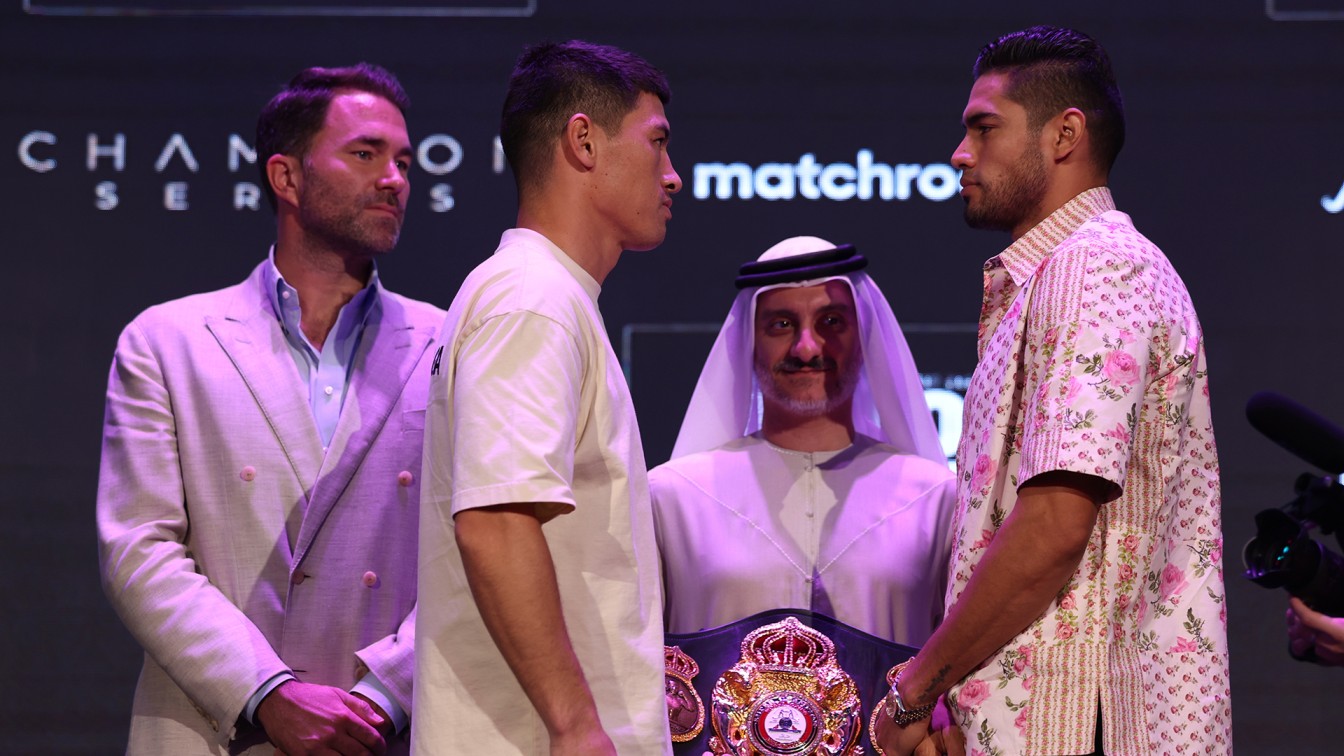 The talking is done: Bivol vs Zurdo presser

“Hello and welcome back to the main event press conference. This Saturday night at the Etihad Arena live on DAZN around the world, we have one of the best fights in boxing. The beginning of the Champion Series, the start of a new era of boxing here in Abu Dhabi with Matchroom Boxing and the DCT.

“From grass roots, inspiring the younger generation to participate in the great sport of boxing, to developing the amateur scene, World Champions, Olympic Champions from this region. Opportunities for professional fighters to flourish on the global scene. Bringing some of the best fight nights, the best fighters here to Abu Dhabi.

“In my opinion this will become one of premier destinations for boxing and I can’t thank the DCT, everybody in Abu Dhabi enough for their help and support. We’re going to have an incredible crowd on Saturday night at the Emirates Arena, an incredible atmosphere and we cannot wait to get underway.”

“Hello everybody. I want to say first of all, thank you to the Abu Dhabi government, the Department of Culture and Tourism for this opportunity for me to introduce boxing to Abu Dhabi. Thank you to Eddie, Gilberto Ramirez and his team – everyone who is involved in this fight. Thank you to my team.

“I really had a big dream to win this belt and I don’t want to leave it. I will fight for this and I want to keep it. I want more. I feel I have something inside of me which I need to realise so I can be happy at the end of my career.

“What about this camp? I had it in three locations, I had a great camp everywhere. The last location was Abu Dhabi. I have been here since September 27th. I feel like I had everything that I needed for training. When I thought about resting, I had everything for resting here. When I met people in the gym or the mall everyone was really happy. People have been very welcoming to me and my team. People are welcoming to every tourist here. It’s good.

“I’m looking forward to Saturday night. I believe it will be an exciting fight. Abu Dhabi will make more boxing fights and maybe boxing will be the main sport in Abu Dhabi. I hope it will be because this is my favourite sport in the world. I want to be everywhere, and people know the sport. It’s great. Thank you everyone.

“When people tell me that I have achieved everything it’s like they pour water on my fire. I try to only think about my dream, to realise my full potential. I try to be hungry and angry every time and be focused on training and my opponents. I try to think about how this Saturday night will be the hardest fight of my career. It makes me more focused on the night.”

“Any fighter has to go through a very long road to get to the top. As a team, it has been part of our strategy to make sure that we look at the end goal, and we don’t look at every point along the way. It’s kind of having a vision of what is at the end.

“I appreciate that you guys have always been there for us. Basically, most of Dmitry’s career, Matchroom, Eddie Hearn, Frank Smith have been a big part of this and the entire team. World of Boxing, RCC Boxing, Main Event, there has been many promoters and entities involved and it has always been our view that we all work as a team and we all try to get to the end point.

“Dmitry and I just spoke about this a couple of days ago, this is probably going to be the first fight where Dmitry has most of the arena backing him and rooting for him. This is the new level that he has got to from the last fight, and I think it adds a lot of responsibility. We’ve been thinking about that and making sure that doesn’t affect him in any way.

“We also wanted to mention that we’ve been here for a month now and Abu Dhabi feels like home. Everything that has been done for us, we don’t want to leave. It’s been very welcoming. It’s a pleasure being here and having camp here. Everything ran very smoothly, and I appreciate that very much.

“I want to thank Gilberto Ramirez, Oscar De La Hoya and his team. This fight has been cooking up some time. Back and forth conversations and talk and press. This Saturday night hopefully the fireworks will come for Abu Dhabi and everybody involved. I really hope it will be an exciting fight.”

“I really believe that I can become a two-time World Champion on Saturday. I want to say thank you to Oscar and to everyone for being here. To my team and all of the press and media – thank you. I’d like to thank Dmitry and his team for making the fight happen.

“It’s exciting for me to come from Mexico and be here in Abu Dhabi. It’s the same weather, I feel like I’m at home. I’ve been training hard for this fight and I will take the belt this Saturday that’s for sure. 44 tried, 44 fell. I hope that the people enjoy the fight because this is the type of fight that fans like to see in boxing.

“First of all, thank you very much to Saleh Mohammed. I greatly appreciate the opportunity and for having us here in Abu Dhabi. Abu Dhabi, Matchroom Boxing, DAZN – we appreciate your support and your platform which is bringing the global sport, the sport that we all love to a huge audience.

“Against a fighter in Bivol who is excellent. I love Bivol, his style is bar none one of the best in the business. I believe that Bivol coming off a tremendous win against Canelo, another Mexican superstar, in his last fight was a tremendous showing. He did a great job. But I do have to say that Zurdo Ramirez is no Canelo. Zurdo Ramirez is a fighter who punches in bunches, a fighter who is big and strong and heavy and southpaw. He is going to be very active.

“I was pretty active last night on social media, but for a reason, because we need these big fights to happen. I’m very proud of Bivol, I’m very proud of Zurdo Ramirez for fighting each other, for showing the world and the fans across the world that fighters are not afraid of each other. Fighters are willing to fight the very best. It’s the people behind the scene that must stand up and show up and make sure that we get fans the best fights possible. Thank you DAZN again. Thank you Abu Dhabi, and thank you Eddie Hearn.”