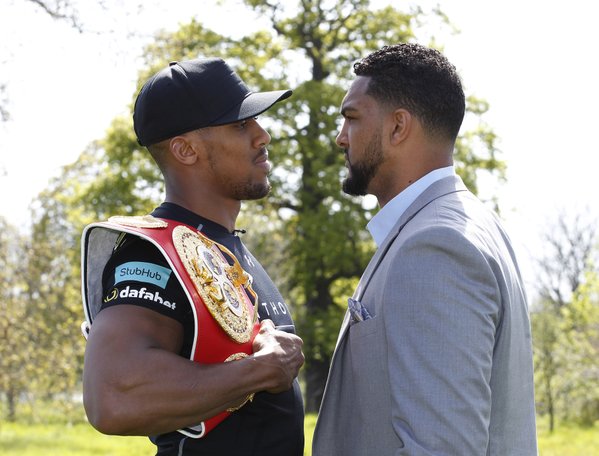 Breazeale: Joshua’s Had It Easy – I’ll Take Him To Places He’s Never Been

Dominic Breazeale says that Anthony Joshua MBE has had it easy in his career so far but he’ll take him into deep waters when they clash for Joshua’s IBF World Heavyweight title at The O2 in London on Saturday June 25, live on Sky Sports Box Office.
Breazeale returns to London four years after he was Team USA’s Super-Heavyweight representative at the London 2012 Olympics. Joshua would go onto win gold that summer and become a British sporting hero in the process, and the Londoner has built on that momentum to move to 16-0 with 16 KO wins, the latest in April landing him the IBF crown he defends on Saturday.
Breazeale has not been swept away by the waves of support and attention that’s followed Joshua since the Olympics, as he believes he was gifted the gold medal. The 30 year old was far from impressed by the efforts of deposed IBF champ and fellow countryman Charles Martin in April, and ‘Trouble’ says he is in town to derail the Joshua journey.
“I plan on putting on some extreme pressure and taking Joshua to places he’s never been,” said Breazeale. “We’ll find out on Saturday night if he can handle it.
“I want him to feel uncomfortable at all given times of the fight, every second of every round. Yes, he’s got rid of a lot of his guys in the earlier rounds, he hasn’t been taken into deep waters. Do I want to see him go into uncharted territory? Of course, without a doubt.
“I’ve been there, I know what it feels like and I’ve done it several times now. At the same time, I’m not going to let an opportunity pass me. If I see something I can take in the first, second round I’m definitely going to get him out of there.
“I was sitting third row and I hands down believe that he lost that gold medal fight. But when you’ve got judges on your side, in your own country Olympics, it looks better when the home native wins.
“I think he’s had it easy so far, fighting in the Olympics in his backyard, having the judges there in his backyard. Even as a professional, he fought a guy in Charles Martin that really didn’t show up fight night. Charles himself had an easy road and path to the title with the whole slip and fall against Vyacheslav Glazkov.
“I think Joshua’s thinking of me as a stepping stone and he’s going to be sorry about that. He’s just wrong. He’s fighting a guy at 6ft7in, 255 pounds that brings the pressure and a great pace from round-to-round. I’m one of those guys that I might take a shot, I might work some defence or I might work a strong jab.
“Either way, I’m going to make it a fight. All of my opponents have been in deep trouble against me and I don’t think Joshua is going to come shy of that as well.
“I’m going in as the underdog, I’m going into an arena with 17,000 opposing fans. I’ve been picked as the smaller guy in the ring, by the IBF as a stepping stone and I feel like my back is against the wall. I’m going to come out fighting.”
Breazeale’s clash with Joshua tops a huge night of boxing at The O2 as George Groves and Martin Murray meet in an eliminator for the WBA World Super-Middleweight title.
Chris Eubank Jr defends his British Middleweight title against Welshman Tom Doran, John Wayne Hibbert clashes with Andrea Scarpa for the vacant WBC Silver Super-Lightweight title, Brixton Heavyweight Dillian Whyte returns to the fray, unbeaten Birmingham star Kal Yafai is in action, Olympic bronze medal man Anthony Ogogo continues his comeback from injury, Conor Benn fights for the third time in the paid ranks and there’s a debut for Team GB star Felix Cash.