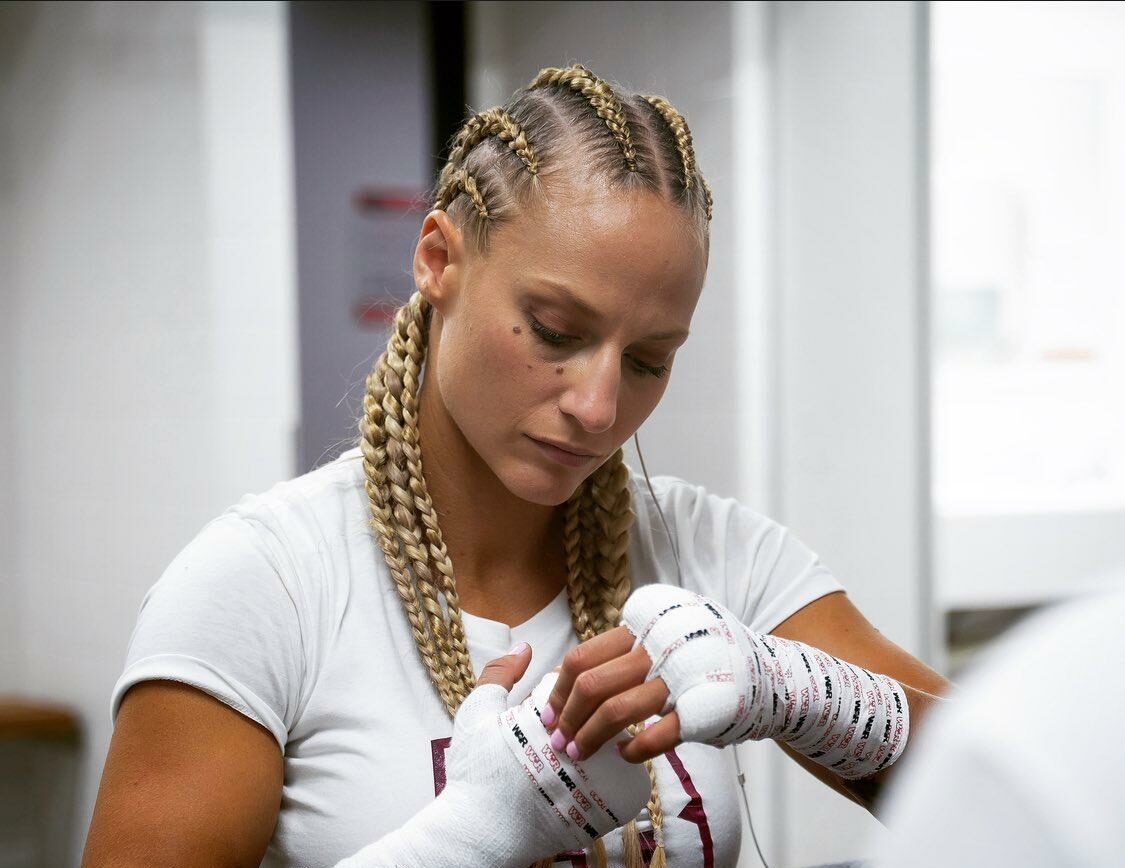 'The Blonde Bomber' fired up ahead of World Title clash

Ebanie Bridges says she will go down as a ‘folk hero’ in the UK if she beats Watford’s Shannon Courtenay when they clash for the vacant WBA Bantamweight World Title on Saturday April 10, live on Sky Sports in the UK and on DAZN in the U.S. and more than 200 countries and territories.

Bridges celebrated her return to the ring after more than a year out with a convincing points win over Carol Earl in Sydney earlier this month. The maths teacher from New South Wales won the judges’ favour and secured a unanimous decision victory to extend her unbeaten run to five fights, including two knockouts.

‘The Blonde Bomber’ meets ‘The Baby Face Assassin’ on the undercard of Conor Benn vs. Samuel Vargas, and in doing so becomes the first Australian female fighter to feature on a Matchroom show, and the 34-year-old is promising to mark the occasion by landing her first World Title.

“I’m definitely being underestimated but that’s great,” said Bridges. “I’m all about shock value. Everything that I do makes headlines, that’s just me. I’m naturally like that, it just happens. When I get in there and throw the first punch of the fight, people are going to sit there and they’re going to be shocked because they have no idea what I’m capable of. I’m not just a Barbie Boxercise fighter.

“I feel like if I beat Shannon Courtenay I’ll go down as a f***ing folk hero in the UK because everyone is DM’ing me asking me to knock her out. They’re all like, ‘hey I’m British and I just want you to shut her up and knock her out because she’s so arrogant’. It’s crazy how many messages I get. I feel like there’s so much pressure on me to f**k her up. Nobody seems to like her over there. If I win, I’m going to be a hero.

“I’m not getting ahead of myself though because I know Shannon is a great boxer. She’s not going to be easy. I’m not going in there thinking this is going to be a walkover. I don’t think that about anyone. Losing is not an option, I’ll find a way. Is she going to be handle what I’m brining? We’re both skilled, both of us have styles that are pleasing to the eye.

“If she doesn’t end up getting knocked out, then by the end of the fight her face is going to end up looking like a smashed crab on a rock. It’s going to be messed up. She won’t be looking the same when this is finished. She’s in for a shock if she thinks I’m only worried about looking good on the scales. When I win that belt, the world is my oyster. It will open up opportunities everywhere.”