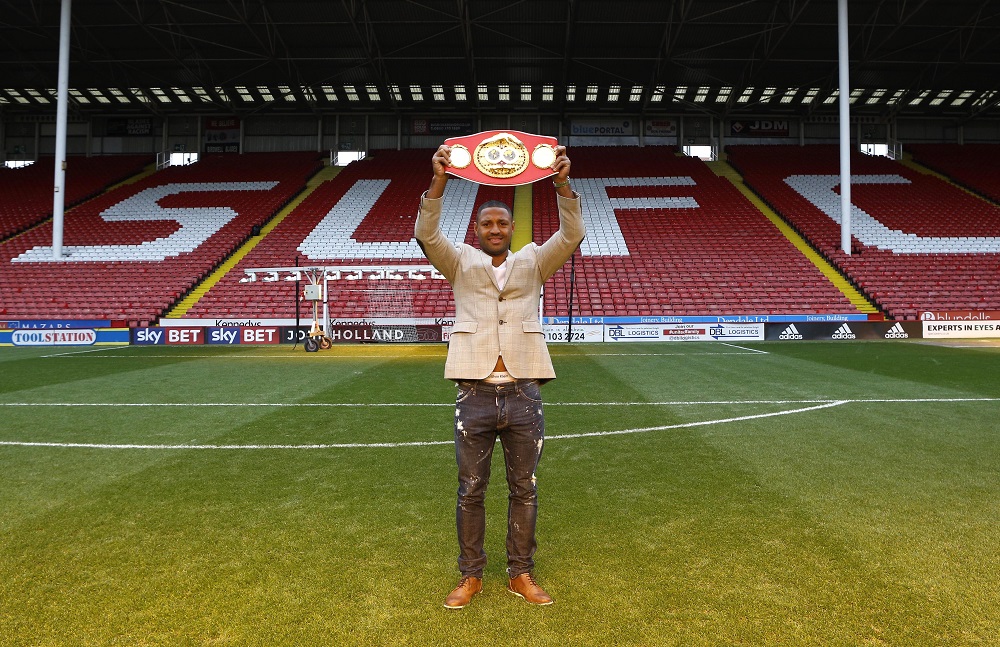 Brook And Spence Clash At Bramall Lane On May 27

Kell Brook will defend his IBF World Welterweight title against US star Errol Spence at Bramall Lane in Sheffield on Saturday May 27, live on Sky Sports Box Office and on SHOWTIME CHAMPIONSHIP BOXING in the US.

Brook makes the fourth defence of his beloved IBF strap he landed in the States in August 2014 with a career-best win over Shawn Porter, and blitzed Jo Jo Dan, Frankie Gavin and Kevin Bizier before stepping up to Middleweight to face fearsome Kazakh Gennady Golovkin at The O2 in September – and now the Sheffield star welcomes another unbeaten superstar into the ring.

Undefeated Spence became the mandatory challenger for Brook’s belt when he blasted Leonard Bundu inside six rounds in August, the eighth straight stoppage win for the Texas-based New Yorker who went into the fight after destroying Chris Algieri inside four rounds two months earlier.

Brook and Spence now clash in the biggest fight in the 147lbs division, and the elite pairing are promising to deliver an electric night at the home of Sheffield United FC.

“I’m so excited about this fight and also about making history in my city,” said Brook. “It’s long been a dream of mine to fight outdoors at Bramall Lane and I’m pleased to do that in the biggest fight in the Welterweight division. I saw many people talk about how I would avoid Errol Spence – they don’t know me, they don’t know what I’m about. All I’ve ever wanted to do is to give the fans the fights they want and they have it right here on May 27 – I’m going to show the world that I’m the best Welterweight on the planet and I’m going to do it right before my people’s eyes.”

“I’m happy I’m finally getting an opportunity to accomplish a lifelong dream of becoming a World champion,” said Spence. “I feel that this is one of the best and biggest fights in world boxing and I am 100 per cent focused and determined to bring the belt back home to the USA – on May 27 I will be more than ready.”

“This is one of the best fights in world boxing,” said Brook’s promoter Eddie Hearn. “Many believed that Kell Brook would look to avoid Errol Spence but he is a proud man who never ducks a challenge. Coming off the fight with GGG this is an extremely tough fight to come back to but I believe Kell Brook is the best Welterweight in the world and he will have the chance to prove it on May 27. It’s ‘The Special One’ vs ‘The Truth’, a historic event at Sheffield United’s Bramall Lane – we are planning an unforgettable night.”

“This is great news for Kell and Sheffield United,” said Sheffield United director Scott McCabe. “We have been working with Matchroom for some time to bring this high profile fight to our Bramall Lane stadium where we have exciting plans to stage further significant events utilising the high standard facilities that have been developed by the Club in recent years.”

Tickets will go on sale to Matchroom Fight Pass members at 10am on Thursday March 30 via StubHub.

Tickets go on general sale at 10am on Friday March 31 via the Sheffield United FC Box Office.

A further announcement on ticket prices and with relevant on sale links will be made soon.