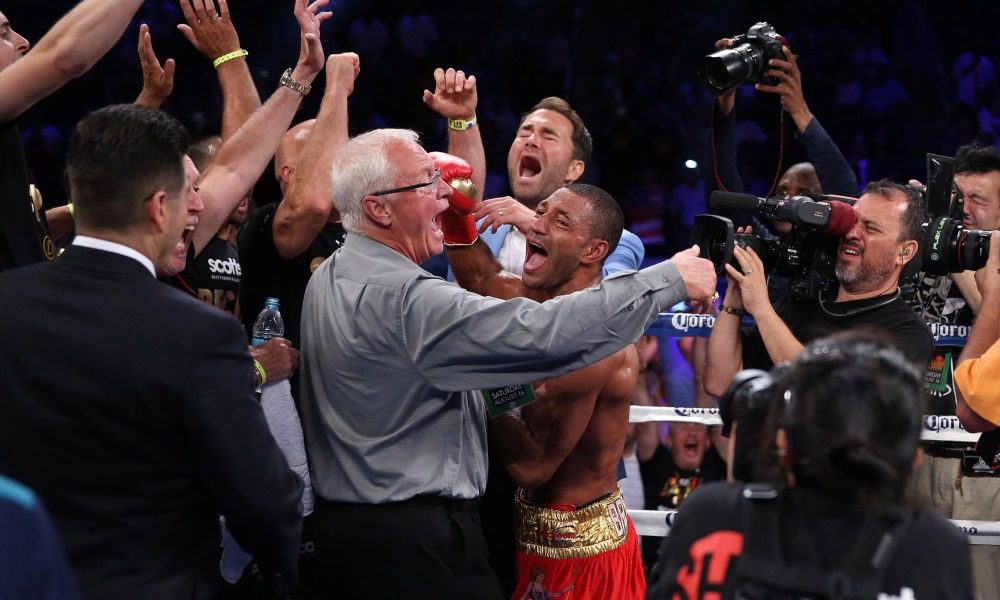 Brook Lands Boxer Of The Year Gong At Bbbofc Awards

Kell Brook was named the Boxer of the Year by the British Boxing Board of Control in an awards ceremony in London that saw Matchroom Boxing Brook landed the honour after a stellar 12 months of action where he won the IBF World Welterweight title in California last August and then after sustaining a horrific leg injury from a stabbing attack, returned to action this spring with successful stoppage defences over mandatory challenger Jo Jo Dan and Birmingham technician Frankie Gavin. Brook was unable to collect the award as he is deep in training camp in Spain for his third defence where he welcomes Argentine danger man Diego Chaves to Sheffield on October 24.

It was yet another emotional night for courageous Manchester man Anthony Crolla, who was given the Outstanding Achievement award. Crolla’s life was in jeopardy before the turn of the year when his heroism in apprehending would-be burglars from his neighbours’ home left him with a fractured skull and broken ankle. ‘Million Dollar’ missed out on a January challenge for the WBA World Lightweight title but his tireless work in the gym meant he landed his shot in July and gave champion Darleys Perez everything he could handle in their controversial draw – and Crolla gets a second crack at glory against the Colombian on November 21 at the Manchester Arena.

Crolla was quick to thank trainer Joe Gallagher for getting him into great shape following the attack, and Gallagher became the first recipient of Trainer of the Year – thanks in no short measure to his work with Crolla’s stablemates Scott Quigg, Paul, Stephen and Callum Smith and Scotty Cardle amongst others.

Dave Ryan’s brilliant win over John Wayne Hibbert at The O2 in May was named as Fight of the Year – the second instalment of their now-trilogy of great fights, where Ryan survived knockdowns in the third and fifth rounds to stop Hibbert in the ninth.

Kevin Mitchell and Jorge Linares were also nominated in that category after they thrilled fight fans with their own ding-dong battle for the visitors WBC Lightweight crown that same night; and Linares picked up the Overseas Fighter of the Year award as a result.

The O2 was a huge night for Welshman Lee Selby as he ripped the IBF Featherweight title from Evgeny Gradovich and his long-time mentor Chris Sanigar was a worthy recipient Sir Henry Cooper Services to Boxing Award.