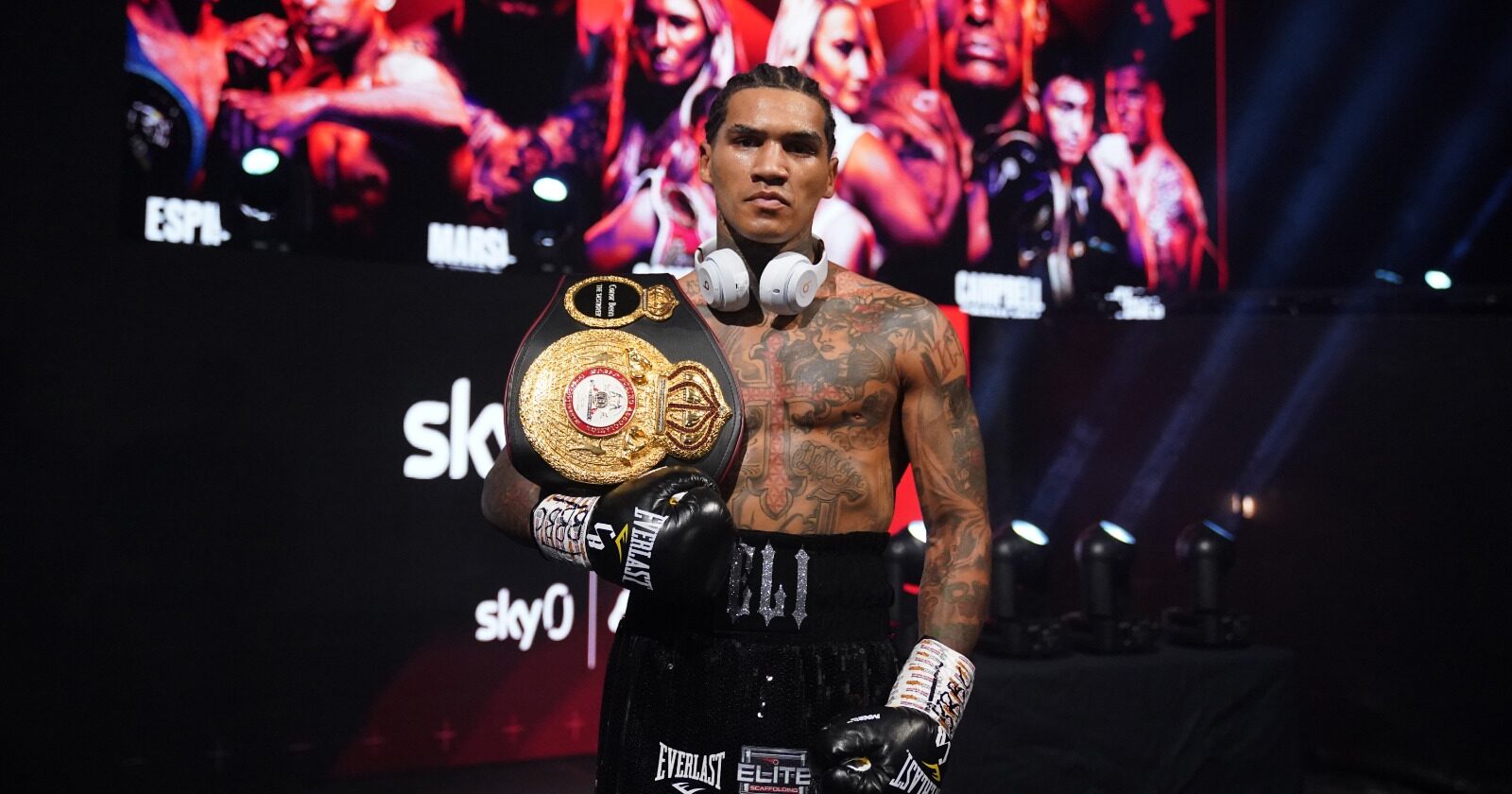 Brutal Benn blitzes Vargas in one round

Conor Benn wiped out Samuel Vargas inside the opening round to retain his WBA Continental Welterweight Title at the Copper Box Arena in London, live on Sky Sports in the UK and on DAZN in the U.S. and more than 200 countries and territories.

‘The Destroyer’ lived up to his name as he took just 1 minute and 20 seconds to progress to 18-0 with twelve knockouts, sending out a brutal warning to his Welterweight rivals.

The unbeaten 24-year-old unloaded a torrent of spiteful shots that left Vargas reeling on the ropes, prompting the referee to swiftly wave it off, and Benn quickly expressed his desire for a big domestic clash with Khan.

“I train hard for it,” said Benn. “Again, you’re talking levels. It shows the level I’m at. Errol Spence, Danny Garcia, Vergil Ortiz, Amir Khan – nobody banged him out like that. First round, first round! He came and he was game. He took my belt off me in the week and I had a little stare down with him.

“He was telling me he was ready to fight, and he was talking a good game. He said I had no power. It’s irrelevant because a lot of people can talk. My shots were landing flush. You could tell they were hurting him. When I first hit him it landed swiftly and I thought, ‘right, this is going to be a much quicker night than I thought’.

“I’ve been working on my power with my strength and conditioning coach Dan Lawrence. We’ve been working with Tony, endless hours. First to arrive last to leave. He’s always pushing me. I told you lot I’d knock him out in the first round. I was cool, calm and collected. I work so hard.

“Give me Amir Khan. I know he’s too busy on reality TV. If he wants it, he can have it. I can deal with pressure. I can cope with it. I can live with it, no problem. I’m ready for the top dogs – Shawn Porter, Adrien Broner? Forget the word prospect, I ain’t a prospect no more.”

Savannah Marshall became the first woman to stop Maria Lindberg in 29 fights as she retained her WBO Middleweight World Title with a third round KO.

The defending champion was far too powerful for her Swedish challenger, who stepped in as a late replacement for Femke Hermans.

A powerful right hand dumped Lindberg heavily to the canvas in the second round, with the bell preventing Marshall from finishing the fight.

It was a brief reprieve as Marshall’s stinging right toppled Lindberg again and she wisely stayed down for the count in the third.

“To be honest, I really didn’t think it would pan out like that,” said Marshall. “Maria is one tough woman. She keeps herself in shape all year round. She’d never been stopped in 27-fights. I thought I was in for a bit of a tough night’s work.

“Once I started finding my range with the jab then the backhand just found its way home and I don’t think she could handle the power. She just said there she’s never been dropped in 23 years! I’m quite proud of that.

“On Sunday, I didn’t even think I was going to fight, and then they brought Maria in. It kind of rocked the boat a bit. A quick change of tactics and we got the job done. She’s been in with some good girls, Christina Hammer, she’s boxed for numerous World Titles. She wanted mine, but she’s not getting it. I’m truly grateful to Maria for stepping up. Big thanks to her.

“I’ve heard whispers we’re going back to Newcastle in July, hopefully with crowds. I’d love to box for the IBF Title which is vacant. I feel good at this weight, I’m a big Middleweight. Me against Shields is the only fight at the bigger weights. It has to happen really. There’s nowhere else for her to go. She needs me just as much as I need her.”

The pair were embroiled in a heated build-up but it was the Watford fighter who had the final word, becoming Britain’s latest World Champion by securing a unanimous decision with scores of 97-94, 98-92 and 98-92.

“Amazing. I don’t want to cry. Amazing,” said Courtenay. “I feel like my jab won me the fight to be honest. My conditioning, my attrition, all of the hard work. My two coaches Charlie and H kill me on a daily basis. They kill me in the gym. I hate them for it, but it bloody paid off. My nice jab, my fitness and my conditioning won me that fight.

“I have to give credit to her because that was a bloody good fight. She was tougher than I thought she’d be. I knew if I stuck to my boxing I’d win. I had to keep listening to Charlie – he kept saying, ‘box, box, box’. When I was getting into a war it was stupid of me. The jab won me the fight.

“There was respect before I got in the ring because anybody that gets in the ring deserves respect. I now have more respect for her. When it was a shootout that was my own stupidity. I’ve come a long way. I’ve said it all week. Tonight is proof that anyone can turn their life around.

“I’m a different person to who I was back then. I’m a World Champion baby! I’m wearing this belt everywhere. This is such a proud moment for me. This is such a good example to young girls that you can turn your life around. I can’t put it into words.”

‘The Untouchable’ displayed his superior ring skills against the tough 28-year-old, receiving a unanimous decision with scores of 97-93, 97-95 and 97-94.

“I’m over the moon with the performance,” Farooq told Sky Sports. “I knew it was going to be a tough fight. I came as an underdog, he was the champion. He took some really heavy shots and he kept coming and coming.

“When you’re a champion you don’t want to give your belt up. He just wanted to win. That’s why he came here. I wasn’t going to be denied. It’s a lot of hard work in the gym. Practice, practice and practice. It’s second nature because I’ve been working on this for such a long time. I can see the punches coming.”

Rugby player turned Heavyweight boxer Nick Campbell got his professional career off to a flyer by taking out Petr Frohlich in two rounds.

The 31-year-old from Glasgow displayed his strength and power as he unloaded a succession of thudding body shots in the opening round.

Frohlich crumpled to the canvas after clubbing shots at the start of the second and referee Robert Williams mercifully waved it off following another flurry of punches from ‘The Glasgow Warrior’.

“I like to try and stay humble, I expected to get rid of that guy to be honest with you,” said Campbell. “I know he’s not been knocked out many times in his losses and he’s tough. He took some shots there. I’m pleased with how it went. I put him down once and then the referee jumped in and stopped it.

“In my opinion it was the dream debut. Making my debut on a stage like that after everything that happened in the past year is something that I’d have never of dreamed of. I’m just buzzing to be here and to be talking to you. I’m happy with my performance. I went in there and I had a high work rate. I was just trying to display the things we’d been working on in the gym.

“I can’t thank my team enough for all of the hard work they’ve put into me. They’re the best team around in my opinion. All of the people that have been singing my praises, that was for you, so thank you. I’m a bit older than most people that make their debut, but I feel young. Every fight that I have is a step further than people thought I could go. I’m just here to prove people wrong and work hard.”

John Hedges moved to 2-0 with a shutout points win over Croatia’s Stanko Jermelic in the opening bout of the night.

In his first fight at Light-Heavyweight, the 18-year-old from Takeley put a difficult professional debut behind him with a calm and collected performance.

“I’m so happy,” said Hedges. “I needed that after the start I had. I’m with a new team now and it just shows what we’ve been working on in the gym. I’d like to thank my team for helping me to get that win. I feel really good.

“After that debut I didn’t feel like I deserved to be on TV this time. This is what I needed to move forward. People must look at me and think I’m a bit of a fleshy Light-Heavyweight. That’s just the body type I have. I feel so much better at this weight. I feel strong and I’m only going to get better as the journey continues.

“That still wasn’t my best, but it was an improvement from last time. I’ll be ready to go again next time with an even better performance. Nobody is going to remember these first few fights. I’m hoping to be like Conor Benn and headlining my own shows in the future.”