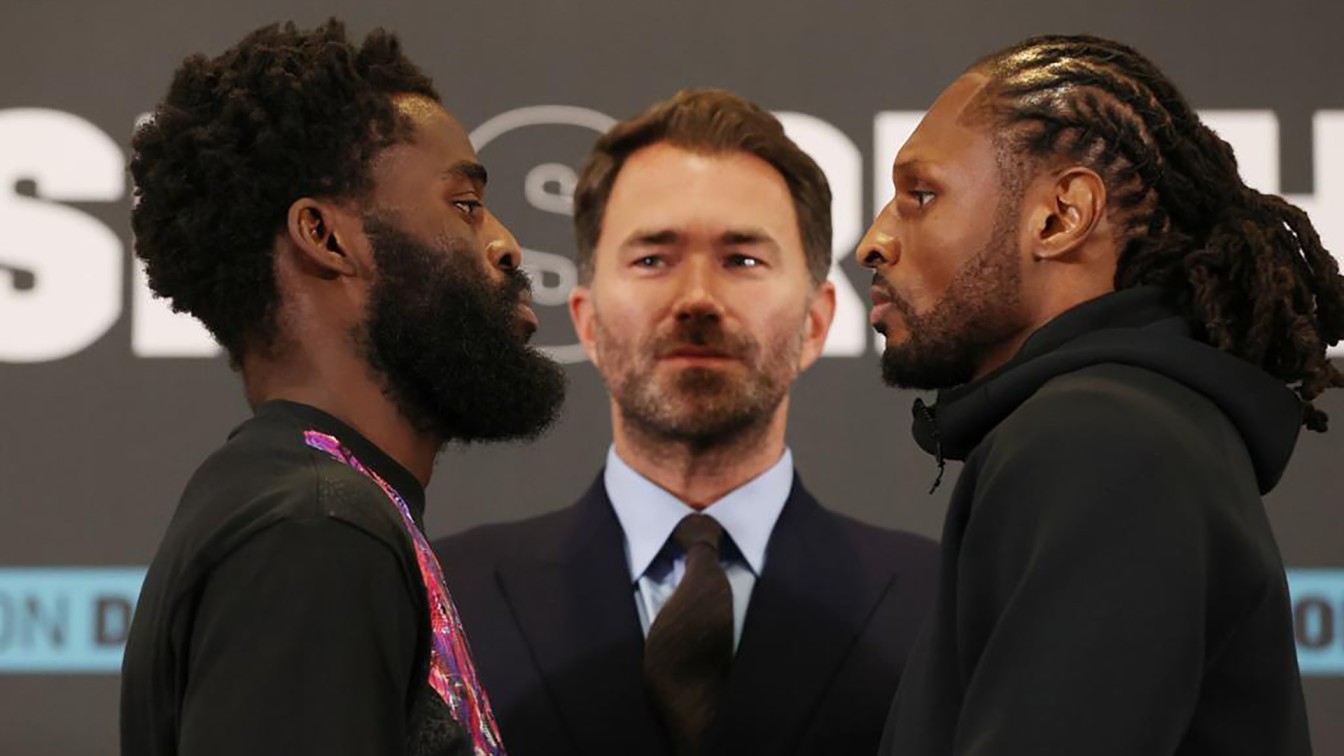 “I think there’s always people to prove wrong Eddie… The talking is nearly done. We’re going to find out on Saturday. The switch hasn’t flicked yet. I don’t think it personally flicked during that face off but we are two or three days away and the switch will definitely flick.

“The struggle from camp, I’ve got that in me. And I know how I want to perform on Saturday. And it’s time to show it because camp was very hard. And I’ve paid the price but someone else has got to pay it now.

“The way that life is now, I go anywhere I need to go to improve. It happened to be in the States. It happened to be in Cali and that’s where I’m at. We all have one career. So wherever I have to be, that’s where I have to be. My family my friends understand that when it’s all over we can party and we can celebrate. But for now Saturday is what’s next.

“Every boxer has got an ego. Everyone sitting on this table has an ego and wants to win. Who here wants to go into a fight and lose? No hands. See what I’m saying.

“I win by being myself. You can look at the stats and say ‘oh this is how he usually wins, this is the style that he fights’, but I’m going to bring it and I’m in it to win it. There’s no other way.”

“100% Eddie, I do believe that I’ll be victorious otherwise I would it be here today. I believe all the fights that I’ve taken have put me in good stead.

“I just say what I want to say. If I feel something I say it.

“It’s not personal to Josh, I just believe that I’m the best in the division. I’m very good at adapting to fighters. I’ve got a very good IQ and it just depends on what I want to bring and what I’ve got in the toolbox that night. And I believe I’ve got the tools to get the job done on Saturday night. It’s not personal to him it’s just that I believe I have the ability to beat anyone.

“I’ve got to keep proving the doubters wrong.”

“I know this is gonna be a tough fight, but that’s what I want. I want the tough fights. I want to prove that I’m a worthy World champion.

“If the stoppage comes, it’ll be nice… I’m hitting harder and I’m fitter. We’ve been working on a few tactics and I think that my punches are going to be a bit more hurtful yeah.”

“Whenever I prepare for any fight I prepare really really well… we have prepared excellently.

“I think the fight is going to be a fantastic one on Saturday. I think it’s going to be quite strategic and tactical you know.

“Whenever I’ve been called upon for an opportunity, I never say no… I step up. And this is the same case on Saturday.

“In terms of Saturday night, it’s all about not missing the opportunity… but you never know, fights can be great and they can turn out brilliantly but let’s see how this one’s going to go.”

“I’m fulfilling my dream every time I come here. I’m in the best shape of my life.

“I expect this to be another knockout, a crazy knockout. I’m not just going there to box. I’m back to my old self. I’m just going to try to knockout this guy. I respect him and he respects me. It’s all good.

“Let’s all just end careers by The Savage!

“I don’t have opinions. I just do stuff and that’s what I’m gonna do.”

“As long as I can remember my friends from Poland lost when they came here, but I’m here to win.

“First of all I do respect my opponent, but he might not have too much experience in boxing. We will see on Saturday in the ring.”

“Every fight that gets offered now, I just accept them all and leave them all to the team. They will sort it out and I’ll fight them all.”

“I’m coming back down to my natural weight and I’ve been training hard. After two losses I never questioned my ability or what I could do in the sport. The only thing I questioned was what I need to adjust.”

“I’ve stepped up every fight and I’m winning too so Saturday night is another step and I really got a step up so I’ll make sure that I do.”

“When you except a defeat, it’s not something that holds you back forever. It brings more will to come back and perseverance. I’ve got a huge desire to perform well this weekend.”

“Yeah fight number two! I’m looking forward to it just to correct things that I didn’t do right in fight number one.

“I don’t think many people can say they’ve had back to back fights at The O2 at the start of their careers. So I’m excited for that! And also we’re in London, my home city so lots of people can come and watch. Looking forward to putting on a performance.”

“You’ve just got to dust yourself off and carry-on.

“When you cannot control what happens in a situation, you have to control how you respond and that’s all I’ve been trying to do, staying positive.

“I definitely feel like I’m transitioning to the pros now. I want to have one more fight at eight rounds and then I think I’m ready.”

“This is my third one on the spin at The O2 so can’t complain at all. I’m getting spoiled here!

“I want to show development and keep on improving … and hopefully just keep the ball rolling so that performances get better.

“For this fight I’ve learned something different about myself. This fight you’re going to see a different side to me, a spiteful side.

“I chose the harder route on purpose because it makes me develop and it makes me try harder and push harder.”