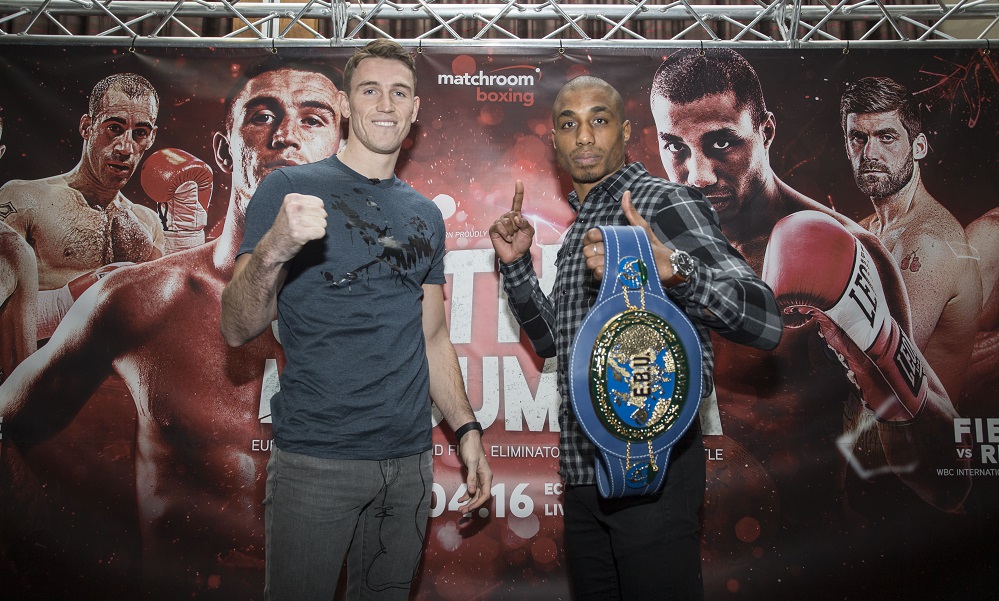 Callum Smith: I Will Win A World Title This Year

Callum Smith says he will in the WBC World Super-Middleweight title as he came face-to-facce with his final eliminator opponent Hadillah Mohoumadi today ahead of their clash at the Echo Arena in Liverpool on April 2, live on Sky Sports.

Smith finally gets his chance to take the mandatory spot in the WBC after winning three eliminators against top ten opposition in Nikola Sjekloca, Christopher Rebrasse and Rocky Fielding, and now the unbeaten Liverpool star must get over one last hurdle to reach his World title dream

That hurdle comes in the shape of Frenchman Mohoumadi, who returns to England having boxed IBF king James DeGale MBE back in 2012 and puts his European title on the line to boot.

‘Mundo’ would become the first of the Smith brothers to hold a European strap should he beat Mohoumadi; but Smith’s real target is to join Liam as a World king – something he says will happen this year.

“This is the biggest fight of my career by far,” said Smith. “It’s great that it’s at home at the Echo Arena. My dream is to fight for a World title; win this fight and I am there, so there can be no slip-ups. He’s a tough fighter and has pedigree so I know I have to be at my best, but I believe with a good camp behind me I will be. Then it’s onto the World title fight and I believe that I can take the title from Jack and hold it for a long time.

“George Groves didn’t want to know when I was calling him out a while back and now the tables are turned, so it’s good to know that I am up there with the best 168lbs in the world and I believe that I can go on and beat them all and become the best of the lot.”

Smith’s last opponent was Fielding and his fellow Merseyside favourite returns to action on the bill with a huge fight against Rebrasse. The Frenchman is aiming to make it third time lucky on English soil having handed out stern examinations to Smith and Groves, but Fielding wants to prove that he still has ambitions on the world scene himself and put the loss to Smith behind him.

“I was gutted about the fight with Callum but it’s gone now and I am straight back into a big fight,” said Fielding, who can land the WBC International belt with victory. “I watched Rebrasse against Callum and George, he’s a fit lad and he comes to win, so I have to be at my best. I feel I need to take him out to make a statement and get back up in the running for a World title.”

The Echo Arena played host to one of the fights of the year between Scotty Cardle and Sean ‘Masher’ Dodd in November, and fittingly it will stage the rematch on April 2. Cardle puts his British Lightweight strap on the line once more against the Birkenhead crowd favourite, and the pair were full of mutual respect at today’s press conference as they reflected on their epic battle that Cardle kept his belt with a final round stoppage.

“I underperformed on the night and I shouldn’t have got drawn into the fight I did,” said Cardle. “I’m better than that and I want to prove it this time. I have aspirations to fight for bigger titles but I said to Sean straight away that I wanted the rematch.

“It’s all experience and I learnt a lot that night. The atmosphere is going to be intense but I will rise to the occasion.”

“Scotty is a true fighting man,” said Dodd. “I really respect him for granting me the rematch and also for the great fight that he put on last time. I believe that I am going to get the win this time though, I think I can do a number on him.

“I’ve had a taste of fighting at a high level on Sky Sports and I like it. I was pinching myself fighting Scotty for the belt after I’d seen him spar in Joe Gallagher’s gym years ago and next thing you know, I am fighting him. I thought I might have been out of my depth before the first one but I truly believe I will beat him this time.”

With three great fights announced today, promoter Eddie Hearn expressed his excitement at returning to one of Britain’s proudest sporting cities with a stellar show.

“There’s nothing like a fight night in Liverpool and April 2 will be one of the best,” said Hearn. “The three fights we’ve announced today really take your breath away.

“Callum is one of the top talents in world boxing and I think this is a well-deserved final eliminator. He’s boxed three top ten guys in the WBC rankings and now there’s just one more hurdle between him and a World title shot.

“Rocky deserves a lot of credit for his role in the Smith fight and for coming back in a massive fight against Rebrasse. The first fight between Cardle and Dodd was one of the fights of 2015 and it’s great that they will get it on again, credit to Scotty for making sure the fight happens and I’m sure they will deliver once more.”

Tickets go on general sale tomorrow (February 3) from midday from the Echo Arena website www.echoarena.com and on 0844 8000 400 – with the Echo Arena selling tickets priced in the £40-£100 bracket. The £200 VIP tickets are available exclusively from Matchroom Boxing at www.matchroomboxing.com and on 01277 359900.