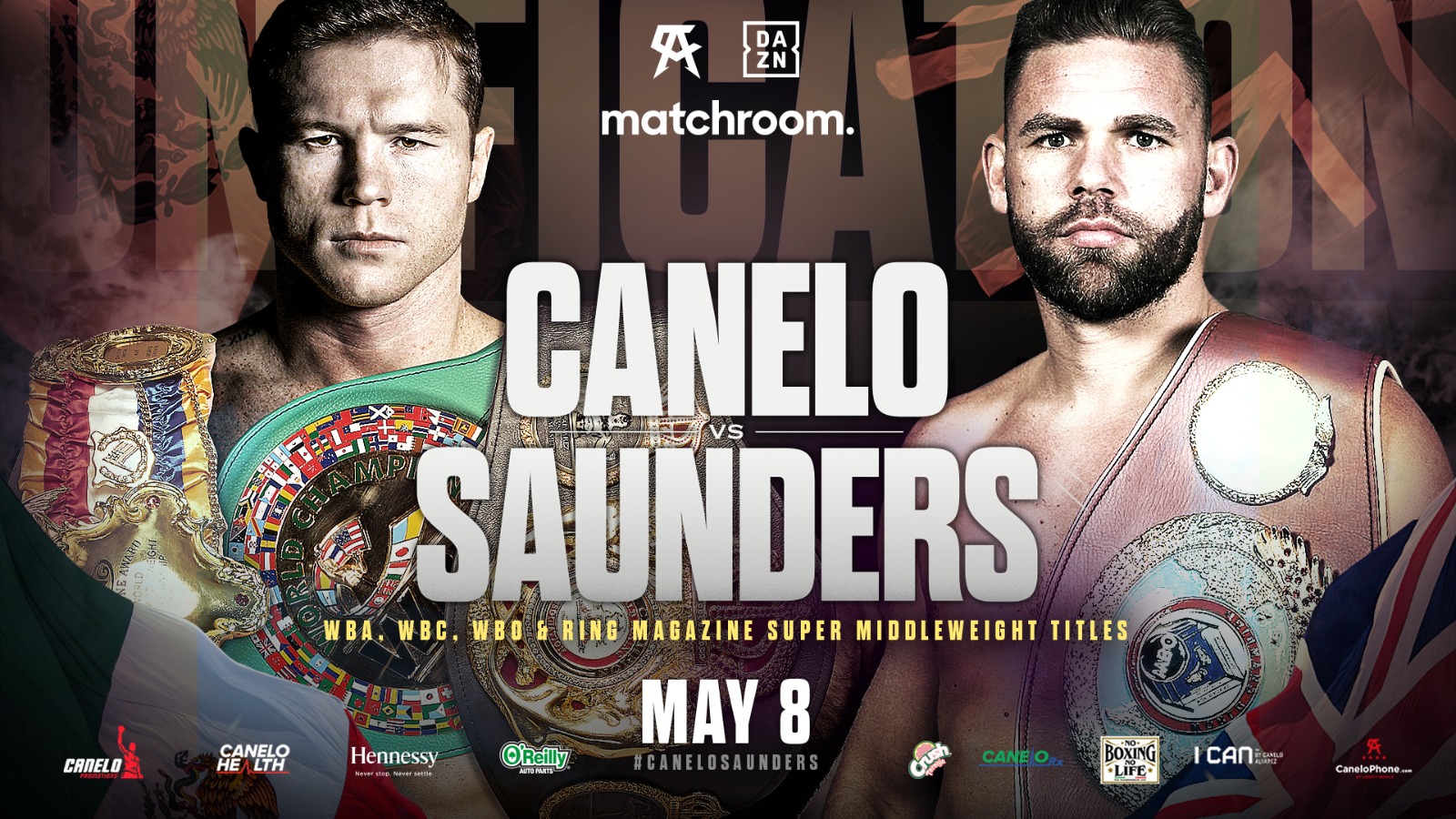 Canelo and Saunders meet in unification clash May 8

Canelo Alvarez will clash with Billy Joe Saunders in a WBC, WBA Super, WBO and Ring Magazine World Super-Middleweight unification blockbuster on May 8, live worldwide on DAZN (except Mexico)

Canelo Alvarez dismantled WBC mandatory challenger Avni Yildirim in three rounds at the Hard Rock Stadium in Miami and next he takes a giant step in his quest to become undisputed by facing the WBO king Saunders at a venue to be announced soon.

Alvarez’s win over Yildirim followed hot on the heels of his dominant triumph over Callum Smith in San Antonio, Texas to win the belts he defended this evening, and now another Briton enters the fray to take on the pound for pound king.

Saunders (30-0 14 KOs) will be putting his WBO strap on the line for the third time, after recently sending Martin Murray into retirement following his comprehensive points win over the British stalwart, and the Briton puts his belt and unbeaten record on the line in what promises to be a mouth-watering occasion.

People talk but I’m a very mature fighter and I know how to control myself. All I need to do is go into the ring, win and make history.

“We want to unify the division, he’s a world champion, we want to go for it and we need to go for it,” said Canelo. “He’s a very difficult fighter and has a championship, the WBO.

“People talk but I’m a very mature fighter and I know how to control myself. All I need to do is go into the ring, win and make history.”

“It’s because it hasn’t been done, no one has done it in Latin America. In the world only a few fighters have done it, the best. I want to make history and be one of the best in the world.”

“Canelo, I’m ready to rock and roll,” said Saunders. “You have to dare to be great and you aren’t going to be a great if you don’t beat the greats.

“I believe I am the only one with the footwork, knowhow, skillset, mindset and brain to unlock that door in Canelo.

“He’s the main man in the sport and the face of boxing. You have to give him respect, he hasn’t ducked anyone, he’s beaten good names, but nobody is unbeatable, and I believe I have got the tools to beat him if I use them properly and if the gamelan comes off that I believe works.

“I am looking at the golden ticket to cement my legacy, and that’s how you have to go in there to beat him. I’ve won everything from Southern Area to World titles, I could say ‘I’ve won it all, been to the Olympics, I’m unbeaten – I’ll see you later’. But I’ve only just turned 31, I’ve got no miles on the clock, haven’t taken any punishment – I believe he’s been in harder fights than me and has more miles, so I want to cement my legacy and beat him.”

“This is one of the biggest fights in the sport of boxing,” said promoter Eddie Hearn. “The pound-for-pound king on the road to undisputed against the unbeaten champion who has long believed he can overcome him. After missing a chance to fight and celebrate on Cinco de Mayo last year this is going to be very special, we look forward to welcoming you for this momentous event.”

“Canelo vs. Saunders is a fascinating matchup of champions with massive international appeal,” said Ed Breeze, DAZN EVP, Rights. “From what we expect to be a fiery promotion to the competition in the ring, we’re thrilled to deliver this fight to DAZN subscribers across the world.”