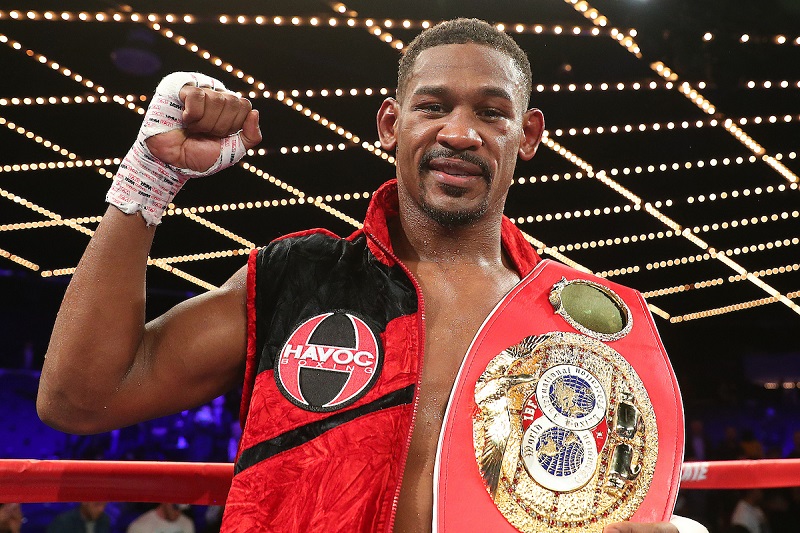 Canelo Vs Jacobs Middleweight Unification Bout Confirmed For May 4

Canelo Alvarez (50-1-2, 34 KOs) defends his WBC, WBA, Lineal and Ring Magazine Middleweight World Titles in a 12-round unification fight against IBF Middleweight World Champion Daniel “Miracle Man” Jacobs (35-2, 29 KOs) during the celebratory weekend of Cinco de Mayo. The champion-vs.-champion event will take place Saturday, May 4, 2019 and will be streamed exclusively live on DAZN.

Additional details for the event, including venue and ticket information, will be announced shortly.

Canelo is a 28-year-old native of Guadalajara, Jalisco, Mexico who became the top man in the sport by facing the best competition and making the best fights for the fans. At 154 pounds, Canelo captured several world titles and defeated the likes of Austin “No Doubt” Trout, Sugar Shane Mosley, Alfredo “El Perro” Angulo, Erislandy “The American Dream” Lara and Liam “Beefy” Smith. However, Canelo scored his most significant victory yet at 160 pounds, where he defeated Gennady “GGG” Golovkin in their highly anticipated rematch in September 2018 and established himself as the WBC, WBA, Lineal and Ring Magazine Middleweight World Champion. Canelo then made history by signing the most lucrative sports contract for an athlete in history to begin a groundbreaking, exclusive partnership with global sports streaming platform DAZN that saw the last king of pay-per-view boxing step into a new era as the new king of sports streaming.

In his debut performance, Canelo became a three-division world champion by knocking out Rocky Fielding in three rounds to capture the WBA Super Middleweight World Title in December 2018. Canelo will return to middleweight for this fight as he continues to clean out the 160-pound division.

“I’m happy to announce my next fight during the festive weekend of Cinco de Mayo,” said Canelo Alvarez. “I will unify my middleweight titles against Daniel Jacobs on one of the two most important dates that belong to me. I have no doubt that I will be victorious and that I’ll be one step away from becoming the undisputed middleweight world champion. And what better way to watch it than on as tremendous a platform as DAZN.”

Jacobs is a 31-year-old native of Brooklyn, New York who is widely considered as one of the best middleweights of this era. Despite being away from the sport for 19 months, due to a form of bone cancer that he courageously overcame, Jacobs rose up the middleweight rankings to win the WBA Middleweight World Title against Jarrod Fletcher in 2014. Jacobs made several successful defenses, including a thunderous first-round knockout of Peter Quillin the following year. Despite losing to Gennady Golovkin in a very close fight in 2017, Jacobs has remained undefeated since his return, defeating former amateur champion and middleweight contender Sergiy Derevyanchenko to capture the IBF Middleweight World Championship. Jacobs will look to capture more middleweight hardware in the biggest fight of his career.

“This is the opportunity I have been waiting for. The opportunity to achieve greatness inside the ring,” said Daniel Jacobs, who has signed a three fight promotional deal with Matchroom Boxing and DAZN. “I have always believed I can beat Canelo, and on May 4 live on DAZN, I will get my chance to play it out. It’s been nearly four years since Canelo has faced an American challenger. It’s going to be a huge event where I believe I will cement myself as the best middleweight in the division.”

“Canelo Alvarez wants the best fights and the biggest challenges,” said Oscar De La Hoya, Chairman and CEO of Golden Boy Promotions. “That’s what he did as the 154-pound champion, and that’s what he’s doing now as the king of the middleweight division. We are also proud to demonstrate to boxing fans that this new partnership with DAZN means that fans will get pay-per-view level fights without the cost of pay-per-view. Golden Boy Promotions is continuing its promise to make the sport as accessible as possible by putting this champion-vs.-champion fight on the platform.”

“What a fight! I can’t tell you how happy I am that Danny Jacobs gets this opportunity to fight Canelo on Cinco de Mayo in a massive unification fight,” said Eddie Hearn, Managing Director of Matchroom Sport. “Victory would cap one of the most incredible, inspirational boxing stories of our generation, and Danny and the team will be putting everything in place to lead him to victory. Respect to Canelo and Golden Boy for accepting this challenge, and congratulations to DAZN and their subscribers for getting this incredible fight with no extra cost. Let’s go May 4! Let’s go Daniel Jacobs!”

“On any other network or platform, Canelo vs. Jacobs would be an expensive pay-per-view,” said Joseph Markowski, DAZN EVP of North America. “At DAZN, we believe the best fights should be available to our subscribers at no extra charge.”

Canelo vs. Jacobs is a 12-round fight for the WBC, WBA, Lineal, Ring Magazine and IBF Middleweight World Titles presented by Golden Boy Promotions in association with Matchroom Boxing. The event is sponsored by Tecate, “THE OFFICIAL BEER OF BOXING” and Hennessy “Never Stop. Never Settle.” The event will take place Saturday, May 4, 2019 and will be streamed live on DAZN.