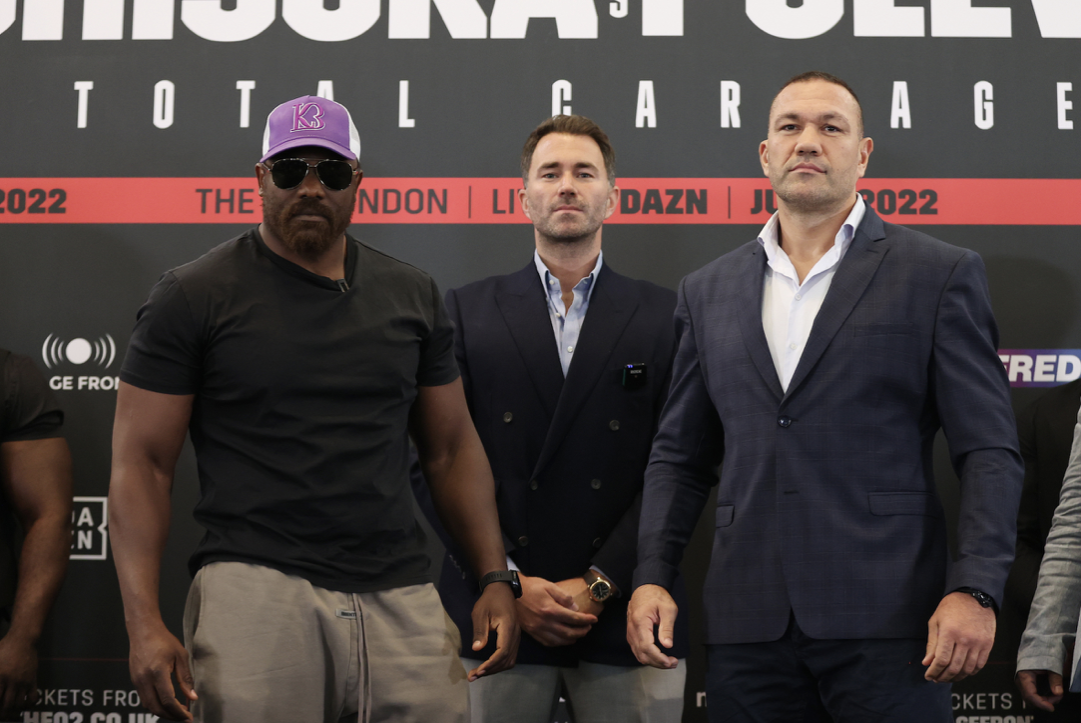 “Welcome to London and thank you for attending a very quick press conference that was called just a couple of days ago, yesterday I believe. Kubrat Pulev, thank you for travelling over from Bulgaria and Ivaylo thank you for travelling over from America. Derek Chisora late, nearly an hour late. He’s slightly late, not mind games, but he had to take care of some responsibilities ahead of a big fight. July 9th at the O2 Arena live on DAZN all around the world. This fight labelled as ‘Total Carnage’. It wasn’t my idea of a strapline, I just said ‘something like Total Carnage’, because that’s what we’re going to get – whether that’s today or whether that’s fight week. What we will get is a great Heavyweight fight at The O2 Arena. Derek Chisora is back to his stomping ground after some great fights over the years. Of course, Dillian Whyte, Joseph Parker, Oleksandr Usyk and a fight with this gentleman to my left a few years ago in Bulgaria which we’ll talk about. We’ve already been debating that fight as well. We want to thank Kubrat for jumping in. We agreed terms with Adam Kownacki but he decided not to take the fight. I wanted the biggest fight for Derek Chisora. He is enigma. After his fight with Joseph Parker I thought it would be an idea to have a nice win, or an easy win. Not on the agenda for Derek Chisora – ‘give me the biggest fight you can find’. Now we have two great well known Heavyweights, Derek Chisor and Kubrat Pulev ready to do battle at The O2 Arena on July 9th.”

“What is the plan? I don’t know. Where is the road leading to? I don’t know. War. What’s the agenda? Where are we going? This guy had a strategy against ‘AJ’ and it didn’t really turn out well did it. For me, my plan is my fans – that is it. Entertainment. Do you understand? That’s what I like. I’ve lost so many fights, I’ve won a couple of fights. I’ve won things that I wanted to win. I prefer fighting. I wake up every morning and I go training. I’ve still got the hunger for it. I get these younger guys into the gym to spar me. I see in their eyes the fear they have by the time they get to rounds three or four. I’m still hungry and I still want to fight. I still want to cause damage to people and I still want to entertain. No disrespect to the big man (Pulev), he waited a couple of years before fighting for the World Title and when he fought for the World Title he was coming out with excuses – ‘I had COVID and I didn’t spar well’. That’s a load of bullshit to be honest with you. I want it more. I don’t have to be liked by everyone. I know what I’ve got, and I sell a product to people who want to have that product. And that product is war. I train hard. I’ve got passion for the game. Come July 9th it’s going to be round 13 basically where we left off. Yes he had a fight a couple of weeks ago, but he boxed a nobody who hasn’t got any of my skills. I’m going to eat his leather and I’m going to deliver my leather.”

“First of all, I want to say to Derek, I have respect for him because he always takes fights against difficult opponents like me and his last three fights. He always takes tough fights and he’s never scared. That’s why I have respect for him. What can I say? I’m ready, I took this fight because I’m ready. My last fight against Jerry Forest was a similar style to Derek Chisora. It was like one big sparring session. He didn’t hurt me. He can’t make a lot of things against me. I just win easy. Derek is a difficult opponent and we have a little bit of history. And now a couple of years on from my first win over Derek I feel good and I feel better because I teach and I learn a lot of things from my fights. I have more experience. My fight against Joshua here in London – I was not well prepared before the fight. Before that fight I had COVID and I didn’t say anything about it. I was not prepared, no sparring and no nothing. I know I’m a very good boxer, technically I’m amazing. Everything, I have everything. That fight with Joshua I was just not well prepared. It was only my mistake. Now, I’m healthy and I’m good and I’m here to fight against my friend. It’s going to be an interesting fight for sure because he’s a dangerous opponent. I’m concentrating on this fight and then after that a World Title.”

“It’s a fantastic fight. The first one was ‘bombs away’, a very closely contested fight. This one should exceed what happened about five or six years ago because I believe both guys are better. I can definitely attest for Kubrat. I believe I have seen Kubrat in the best shape of his life. His last performance was amazing. He destroyed Jerry Forest only about a month ago, so we walked right into this one ripe and ready. What a great fight – thank you for the opportunity. We want to make a statement come July 9th and we’re looking forward to coming back many times to England.”