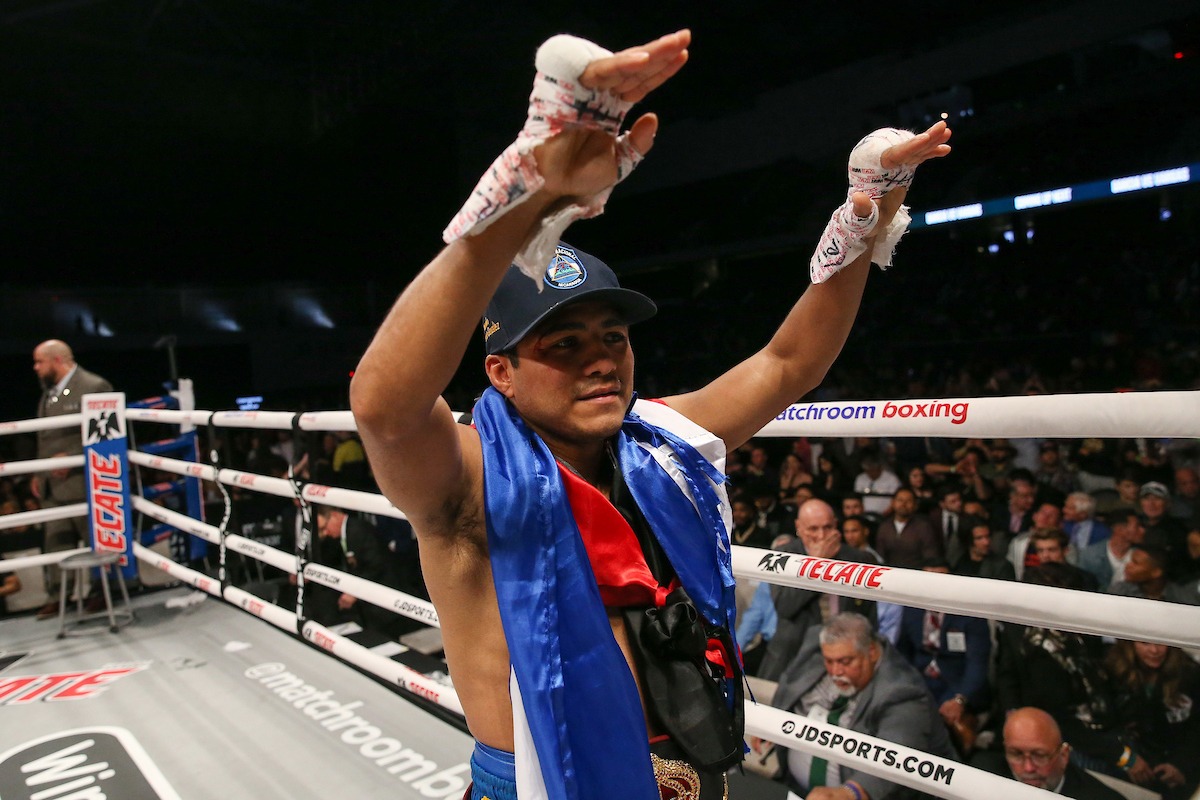 Roman ‘Chocolatito’ Gonzalez says he is ‘proud to have represented Nicaragua with such dignity’ – but still has plenty more to add to his legacy as he prepares to face Juan Francisco Estrada in a unification rematch at the American Airlines Center in Dallas, Texas on Saturday night, live worldwide on DAZN.

TICKETS FOR ESTRADA VS. CHOCOLATITO ARE ON SALE NOW FROM TICKETMASTER – TICKETS START AT $35 (PLUS FEES)
WATCH VARGAS AND ALGIERI TALK TACTICS ON MATCHROOM’S YOUTUBE CHANNEL NOW!
Chocolatito (50-2 41 KOs) was victorious in the first fight with Estrada (41-3 28 KOs) in November 2012, and his final fight as a Light-Flyweight World ruler. Two years later in his 40th pro fight he became a three-weight World ruler by beating Akira Yaegashi in Japan for the WBC and Ring Magazine World Flyweight titles and his September 2016 victory over Carlos Cuadras landed him World honors at a fourth weight with the WBC Super-Flyweight strap.

Chocolatito has always been honored to be part of the rich boxing history in his homeland, led by one of the all-time greats in the late Alexis Arguello, and the former pound-for-pound king fondly remembers looking up to and spending time with Arguello, as he looks back on a remarkable career that he believes still has many more chapters to be written.

When I retire, I will leave very satisfied and very happy to have been able to have so much success for my kids and my family, and also for the people of Nicaragua.

“When I fought Yaegashi, the question that all of Nicaragua had was ‘Are you on the same level as Alexis Arguello?’” said Chocolatito. “I won that third title in Japan and then a fourth title came, where everybody was waiting expectantly to see if I’d win it. I trained a lot because it was one of my dreams. And then… boom! I won the title and Nicaragua welcomed me like never before.

“I’m so proud to have represented my country with such dignity. And well, I’m so happy for my parents, my family. And for Alexis, who was always there for me, teaching me the good things about this boxing world.

“I always respected all the orders Alexis gave me because he’s a three-time champion. It’s an honor. He was like my father. We were very close. Sometimes he invited me to his house, and I remember being at his house, eating and I got relaxed, and he dropped me off at my fight and that day was the first time that I got hit hard.

“I was scared, but I got up and I knocked the guy out. But those are life experiences that I had with him where I learned. Because I think, I could have not gotten up after that punch. But due to the conditions, it made me get up again. Alexis was a very demanding person in the gym. And even in the fight.

“I consider myself a man who’s done the best that I could. I had difficult times growing up but, in the end, it worked out well. Life has taught me a lot of things, and I learned. And I feel and think that I’ve already conquered many things in boxing. What comes now with this title is just extra.

“I never imagined myself getting to where I am now. But wow, it is still hard, it costs me. Because I train the right way. I do things the way they should be done. But I like it. And it’s what’s let me help my family. Help my kids. I don’t complain because I thank god for where I am now.

“Life has been hard and difficult with sacrifice. My family, my children, what makes me get up in the morning is to keep reaping victories in boxing. Not only that, but many young guys that want to be like the champ, like Chocolatito. But in the end, it’s what gives you your happiness in life. What you want to achieve in your life.

“When I retire, I will leave very satisfied and very happy to have been able to have so much success for my kids and my family, and also for the people of Nicaragua.”

Estrada and Chocolatito clash on a massive night of triple-header World title action.

There’s another case of repeat or revenge as Jessica McCaskill (9-2 3 KOs) defends the undisputed World Welterweight title against Cecilia Brækhus (36-1 9 KOs) and there’s a Matchroom debut on the card for Hiroto Kyoguchi (14-0 9 KOs) as he defends his WBA and Ring Magazine World Light-Flyweight titles against Axel Vega (14-3-1 8 KOs), and it’s a huge night for a clutch of rising talents on the bill.

Ford (8-0 4 KOs) has been in hot form, closing 2020 out with impressive stoppage wins in Florida and Texas and the 21 year old takes on unbeaten New Mexico talent Aaron ‘Angel Baby’ Perez (10-0 6 KOs) over eight rounds.

Williams (7-0 6 KOs) is looking to build on his own stellar 2020 performances where he won all three of his fights via stoppage in Miami, Mexico City and Dallas, and ‘Ammo’ will look to continue that streak in his first eight round bout against the experienced ‘Momma’s Boy’ Denis Douglin (22-7 14 KOs) who has shared the ring World champions George Groves, Anthony Dirrel, David Benavidez and Jermell Charlo.

Jones III (5-0-1 2 KOs) battled to a split draw in Mexico City in his last outing in October, and the Ohio starlet will look to brush that off in his first eight round battle against dangerous Texas native Jorge David Castaneda (13-1 11 KOs).