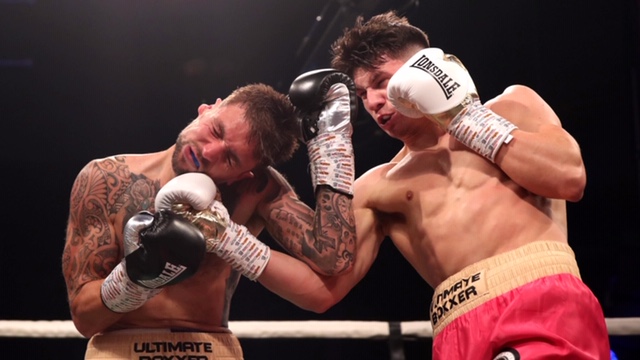 Kieron Conway says he is ready to make history in Northampton by becoming the town’s first British Champion when he clashes with current Super-Welterweight ruler Ted Cheeseman on this Friday’s JD NXTGEN show at Bethnal Green’s York Hall, shown live on Sky Sports in the UK and DAZN in the US.

Conway, 23, raced to 10-0 before suffering a first career defeat in the semi-finals of the Ultimate Boxxer III Middleweight tournament to the eventual winner Derrick Osaze. The Cobblers fan is no stranger to the big stage having fought on the Amir Khan v Samuel Vargas card last October and is hungry for more more of the high-life.

“The British title is the pinnacle of domestic boxing and every British fighter dreams of these opportunities,” said Conway. “Being a British champion has always been a big dream of mine as it would be great for me but also history for my town of Northampton. Winning the British title as an ‘away’ fighter would be a big statement. I believe that I belong on this stage.

“I feel like a beast at Super-Welterweight and I’ll be looking to make my size count on the night. Fans can expect a new champion in this fight. I’m keeping my eyes on this bout on Friday, but a win here and there are big fights after this that excite me. Winning on a big platform like Sky Sports will open up a lot of doors for me so it’s a big opportunity.”

Cheeseman endured a gruelling defeat last time out in February when he stepped up in class to face EBU European Champion Sergio Garcia at The O2 in his first headliner. Conway believes the punishing manor of his opponent’s defeat will have an impact on their British title showdown.

“I’d say the amount of punches taken in his last fight will impact ours because I’d imagine he will be coming with a lot more head movement and less aggression, as the longer the fight goes the more his aggression will play into my hands.

“I sparred six rounds with him about two years ago, but two weeks can make huge differences in boxing let alone two years, so I can’t really take much from that. He’s fit and relentless in his work but I’m not sure how much his last fight will have taken out of him – he took a lot of damage for 12 rounds.”

Very limited tickets priced £40, £70 and £130 VIP are available to purchase via StubHub (www.stubhub.co.uk).