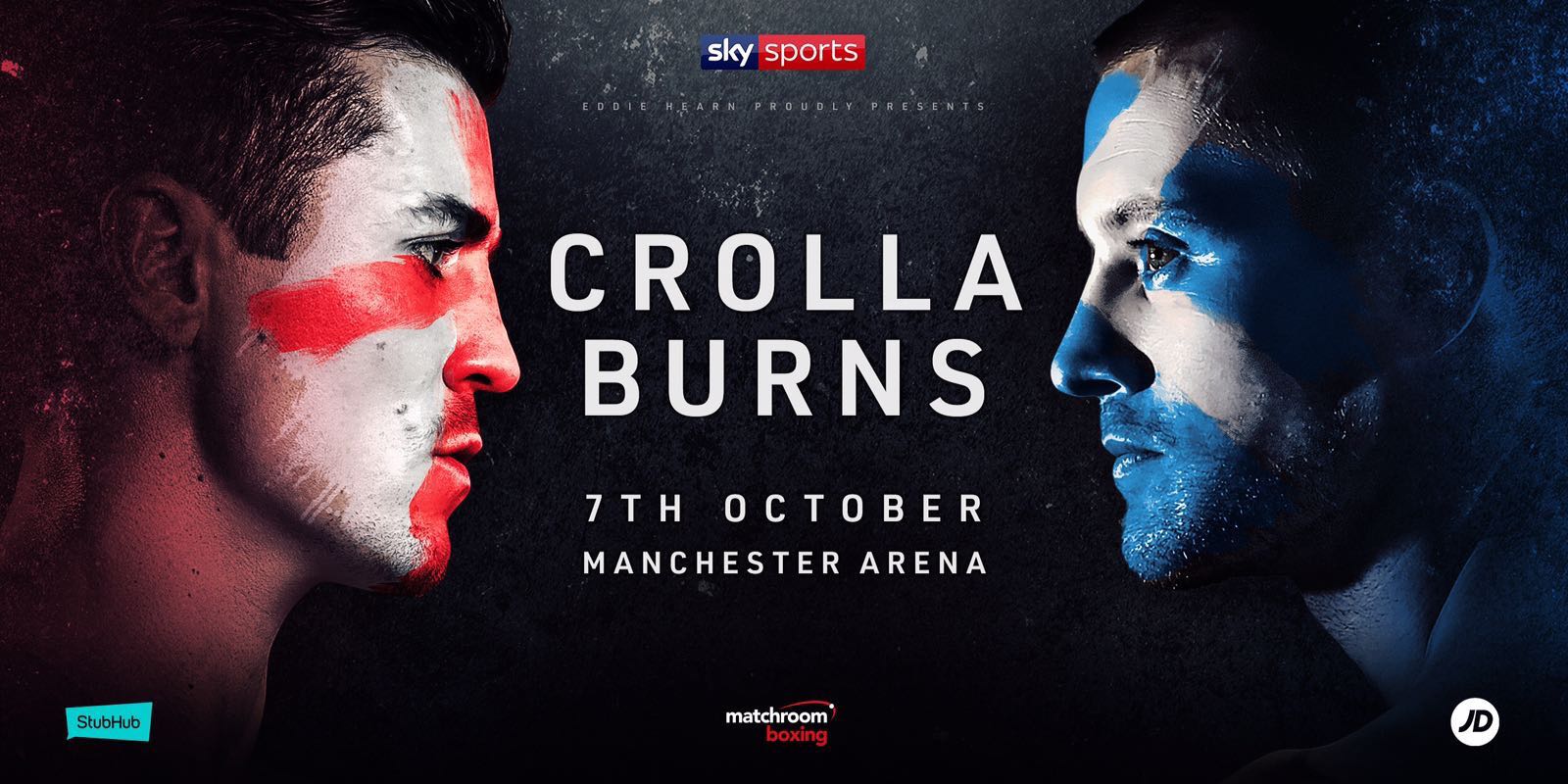 Anthony Crolla and Ricky Burns will clash in a must-win Lightweight battle at the Manchester Arena on October 7, live on Sky Sports.

The former World champions will be looking for a huge win to get back into range for a World title tilt and continue their glittering careers at the top level.

Crolla enjoyed a rollercoaster ride as WBA king at 135lbs starting with his cancelled challenge against Richar Abril when he heroically challenged robbers at his neighbours home in December 2014. After recovering from a skull fracture and broken ankle, ‘Million Dollar’ finally got his first shot in July against Darleys Perez at the Manchester Arena but was edged out in a controversial draw. The pair rematched in the same venue five months later and Crolla took his second chance out of the judges’ hands with a stunning 6th round KO from a brutal body shot. Crolla delivered the same salvo against dangerous mandatory challenger Ismael Barroso in in May 2016 to halt the Venezuelan in round seven.

That win led to a keenly fought pair of unification battles with Jorge Linares in Manchester that the visitor won, but Crolla insists that Burns will not follow in Linares’ footsteps by defeating him on home soil.

“All I want to do is be involved in big fights and Ricky Burns is a three weight World Champion, I’ve got a lot of respect for him,” said Crolla. “He’s a great fighter and only lost to the very best.

“I’m looking forward to going to battle and putting on a display for the fans. Camp started a few weeks ago and I’m in a good place.

“It’s at a good time for both of us. A win puts us back in the mix for titles, I’m not going to say the loser has nowhere to go, but it’s going to be a tough road back. We’re both coming off losing our World Titles and the incentive is to win the fight and get back in the frame.

“I could have a tune up fight on the undercard of somewhere and an easier opponent to get me back into things and then a big fight after but I’m not interested in that.

“It’s nearly happened before a good few times, a few years ago at Super-Featherweight and again at Lightweight. It’s been talked about for years now. It looked like it wasn’t going to happen but it’s good now we’re finally going to meet.”

It also marks an emotional return to the Arena for Crolla following the devastating terrorist attack at the Arena in May, and Crolla expects this to be the most poignant night of all at Manchester’s famous boxing home.

“I’m really happy the fight is in Manchester,” said Crolla. “It’s going to be one of the first shows since that horrible night with the bombings so it means an awful lot to go back. A lot of people have been asking me to come back to the Arena for my next fight. But if there’s a rematch, I’ll happily go to Glasgow.

“The 24 rounds with Linares puts me in good stead. They weren’t fights where I took a serious beating with huge shots bouncing my head back. Other than the knockdown, I wasn’t on wobbly legs. I enjoyed the experience. I made improvements in the build-up which I didn’t get to show on the night which is a credit to Jorge.

“I’ve got nothing against Ricky, he’s a good guy. But once that bell goes we’ll both be willing to dig deep. I’ve wanted this for a long time, I can’t wait.”

Burns created history in Scotland in May 2016 when he defeated Michele Di Rocco in Glasgow to land the WBA World Super-Lightweight title and become the country’s first ever three weight champion.

The Coatbridge star successfully defended the crown against tough mandatory Kiryl Relikh in Glasgow in October 2016 before falling short in a unification battle with IBF king Julius Indongo in April.

The 34 year old secured the WBO World Super-Featherweight title in September 2010 before moving up to claim the WBO strap at Lightweight in November 2011 and the ‘Rickster’ is ready to prove he still has big ambitions at world level.

“It’s going to be a great fight,” said Burns. “There was a lot of talk in recent weeks, the response we got was unbelievable. People want to see it and now the deal is done I’m looking forward to it.

“It doesn’t bother me where I fight, there will be a good crowd coming down from Scotland. It’s a fight the fans have been getting up for and I’m sure they will turn up in their numbers.

“When I held World titles at Super-Featherweight and Lightweight, Crolla’s name was always mentioned but it never happened. He’s a great guy and a great fighter, I don’t think you’ll get much trash talk in the build-up. The best man will win on the night.

“I’m always saying to Tony I think I’ve got two or three more years left. At this stage of my career I don’t see the point in getting an easy win. I’d rather go in with a big name. If I win, I’m going to progress and hopefully get another title shot. That’s the way I’m looking at it.

“Everyone keeps asking me how long I have left. The first time I take too many punches or turn up to training and don’t enjoy it – that’s it. I won’t put myself through it. Especially with training down in Essex for 12 weeks, but at the minute I’m really looking forward to it.

“I said to Eddie I was 100 per cent up for it, but we’ve been waiting for a couple of weeks from their side so I don’t know what’s been going on.

“Crolla just fell short with Linares, although he lost twice he didn’t take a beating. You’ve got to hold your hands up – Linares is very good.

“It’s a make or break fight for the both of us. Even before I fought Di Rocco I always said I just want to take it one fight at a time. I’ve been the same the whole way through my career but fingers crossed a win here can lead to bigger things.

“It’s going to be hard, tough fight. The two of us will come out and go for it – the fans are the real winners.”

“What a fight between two great warriors” said promoter Eddie Hearn. “Both Anthony and Ricky are in similar places in the careers and they know that this absolute must win. Knowing these two like I do this is going to be a fight until the finishing bell with neither taking a backward step. It’s an all-British super fight between two great World champions and fans in the Manchester Arena and watching on Sky Sports can expect a wonderful event.”

Early details on the undercard and tickets will be announced at a launch press conference in Manchester on Tuesday.