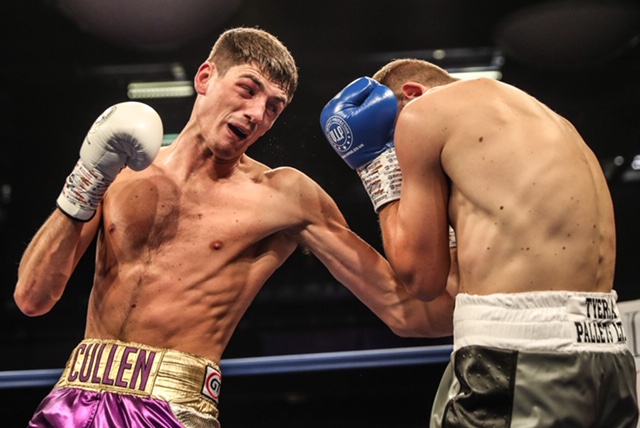 Cullen: I’m Too Good For Him

Jack Cullen says he will be “too good” for John Harding Jr. when he defends his English title against the Dillian Whyte managed-Middleweight at the Exhibition Centre Liverpool on Friday August 2, live on Sky Sports in the UK and DAZN in the US.

Having plied his trade on smaller shows in the North West, winning the English belt against Jack Sellars at the Bolton Whites Hotel in May, Cullen will be hoping for a breakout night on Merseyside against Brixton’s Harding Jr. who holds a record of seven wins and one draw.

The 25-year-old Tommy Battel-trained talent from Bolton has lost just one of his seventeen professional fights and is promising to shine on the big stage to secure a shot at Commonwealth Champion Felix Cash later in the year.

“I wouldn’t turn down a shot like this if I was in his position so good on him for taking the fight,” said Cullen. “I don’t know too much about him but we’ve watched a few of his fights and I know he’s got seven wins and one draw. I think this step-up is too soon for him. I feel like I’m too good for him.

“He’s been out there talking a lot in interviews and making a bit of noise ahead of our fight which is good. He’s been saying that he’s going to be doing this and doing that. I’m glad I’ve got an opponent that’s confident in himself. He talks the talk but we’ll see if he walks the walk.

“Once I beat Harding Jr. I want the Commonwealth title. If it would have come earlier this month then it would have been perfect but obviously he got injured and the show had to be postponed which was a shame. Hopefully we can rearrange it for later in the year, maybe October or November.”

Cullen vs. Harding Jr. is part of a bumper JD NXTGEN card in Liverpool.