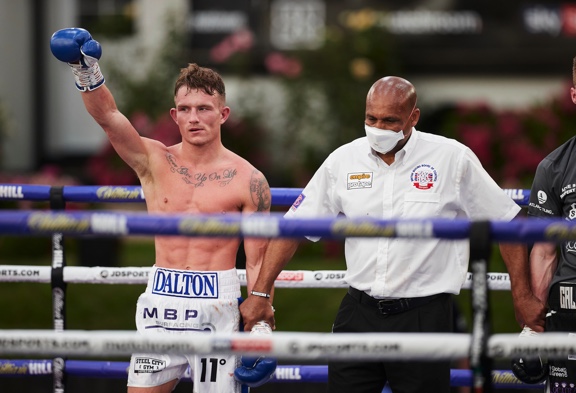 Dalton Smith will once again look to demonstrate why he is rated as one of the very best prospects in British boxing when he takes on late stand-in opponent Ishmael Ellis over ten rounds at The SSE Arena, Wembley on Saturday February 13, live on Sky Sports in the UK and on DAZN in the U.S. and more than 200 countries and territories.

‘Thunder’ (6-0, 5 KOs), who was originally slated to fight Rotherham’s Lee Appleyard before the Stefy Bull-trained 33-year-old was forced to withdraw from their contest after contracting Coronavirus, will be hoping to build on a career-best win last time out when he stopped Nathan Bennett with a massive one-punch KO in the fifth round of their Fight Camp clash.

Smith, Sheffield’s most successful amateur boxer of all time, has made a perfect start to life in the paid ranks, winning all six of his bouts in impressive fashion and stopping all but one opponent inside the distance, and the just-turned 24-year-old talent has another golden opportunity to shine on this weekend’s Josh Warrington vs. Mauricio Lara undercard – Matchroom’s first show of the year.

“The Lee Appleyard fight was a fight that I was massively up for and I think it would have been a great fight at the perfect time in my career,” said Smith. “It’s just one of those things. We’re still in the middle of a pandemic and people are going to catch the virus. It’s a fight I was looking forward to and I’m pretty sure we can get it on again in the future. I hope Lee has a full recovery.

“I’ve only had six fights but I’m stepping up quite fast. You’ve got to make sure that you’re going at the right pace. You don’t want to be rushed too fast. You’ve got to get that experience in. I’ve got a good team around me. We’re going at a good pace. I think every fight that you take has to be a step up and something new, otherwise there’s no point fighting.

“With my amateur background I’ve boxed every style out there, some of the best kids in the world. I was able to adapt. If you become one-dimensional, you’re not going to reach the top, especially in the professional ranks. I know that I’m able to adapt. I’ve got the power to back it up. I can fight and I can box. I know that I’m comfortable when I’m in that ring.

“They always say you can’t buy experience. I’ve been lucky enough to travel the world. There’s been a lot of situations where it’s been uncomfortable – especially over the Team GB camps. It makes you into a man. When it gets tough in that ring, that’s when the experience kicks in. If you’ve been there before then you know how to deal with it.”