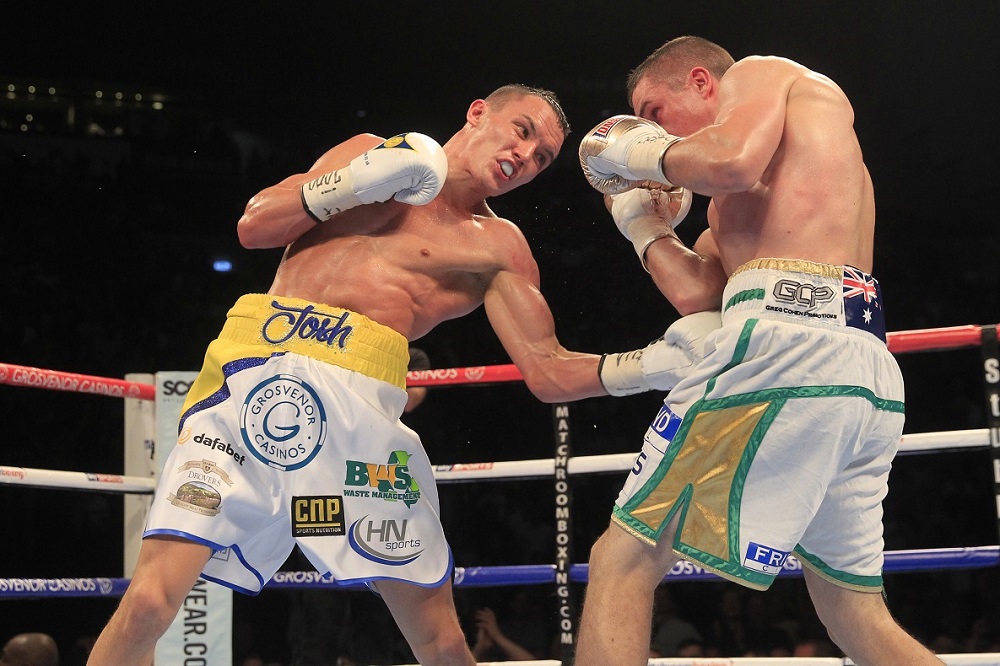 Josh Warrington proved that he belongs at the World level with a shut-out win over Joel Brunker at the First Direct Arena in Leeds, live on Sky Sports.

Warrington’s defence of his Commonwealth and WBC International Featherweight titles against the Australian was billed as a yardstick to measure his preparedness for the big time against a familiar foe on British soil.

Brunker’s sole loss came in London against Lee Selby in a World title final eliminator and although Warrington was unable to end the night early, the 24 year old produced a memorable career-best performance.

Warrington controlled his emotions in the pressure-cooker atmosphere to produce shots of quality and in great volume from the opening bell to the last and never allowing the dangerous visitor to get a foothold in the contest.

The three judges at ringside underlined Warrington’s authority by handing in 120-108 verdicts, and the attention then turned to IBF king Selby – the man that the Leeds hero would love to meet next summer at Leeds United’s Elland Road after passing tonight’s examination in style.

“It was my biggest test,” said Warrington. “I wanted to listen to my corner men tonight and that is what I did. It was about showing that I could box for 12 rounds. I did have him wobbled a couple of times and I am happy with the performance.

“Last time, with the size of the crowd, I got carried away and was trying too hard to blast him out. Tonight I knew he was a dangerous guy so I wanted to take my time and stick to my boxing.

“Joel is a World-class performer with a brilliant record and you know you can’t come in at 99 percent, you have to be 100 per cent switched on.

“I listen to my team and Eddie and Steve and I will box whoever they put in front of me. I know what the crowd want and I have to take every fight as it comes and it is all working towards that big World title fight against Lee Selby at Elland Road.”

Promoter Eddie Hearn added: “Josh is a very modest guy so I will speak for him if he isn’t going to say it – that was a world-class performance against a world-class fighter in Joel Brunker. Tonight was about stepping up to World level and he has shown that he hasn’t just got some of the best fans in the world but he is a great fighter as well.

“A lot of people say Josh Warrington is just a ticket seller. He has come from small-hall shows and has won the English, British, Commonwealth and European titles and now he has shown he is a World-class fighter who is ready for the World stage, 100 per cent.

“The First Direct Arena is a great arena, we have had some great nights here, but do you want to make a little bit of history at Elland Road? Lee Selby is a great fighter and you have seen him win the World title he is defending on October 14 on Sky Sports. There is no reason Selby-Warrington can’t happen at Elland Road next year. It would be a wonderful occasion.”