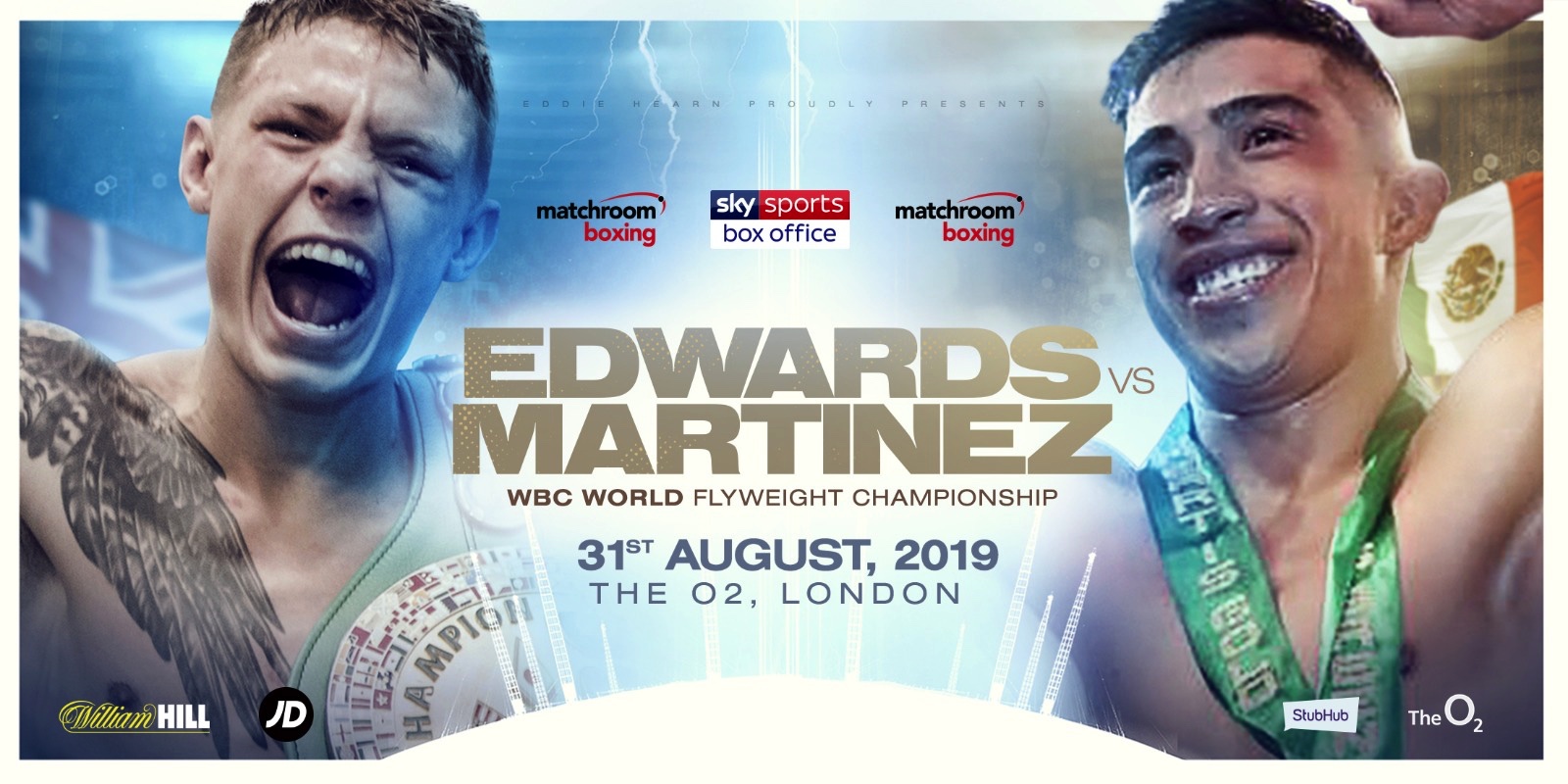 Edwards Meets Martinez At The O2

Charlie Edwards will make the second defence of his WBC Flyweight World title against his Mandatory Challenger Julio Cesar Martinez at The O2 in London on Saturday August 31, live on Sky Sports Box Office in the UK.

Edwards ripped the WBC 112lbs crown from Cristofer Rosales on an emotional night at The O2 in December, outclassing the Nicaraguan with a masterful display to take a well-earned unanimous decision in his second World title attempt.

He turned on the style as he successfully defended his World title for the first time against Spain’s Angel Moreno at the Copper Box Arena in March, winning every round against his former sparring partner in a dominant display.

Martinez, hailing from Mexico City, landed his shot at the coveted green and gold belt by taking out highly-rated Welshman Andrew Selby in five rounds in their Final Eliminator bout earlier this year in March.

It was a first career loss for Selby, who was once regarded by many as one of the brightest prospects in the UK. A brutal left hook liver shot ended proceedings in the fifth session to set up a first World title shot for Martinez.

Losing on his professional debut in October 2015, ‘El Rey’ has since won fourteen fights on the bounce, scoring eleven knockouts in that impressive run. Halting Selby means no opponent has gone more than six rounds with the 24-year-old since June 2017.

“He’s a very tough Mexican who can bang with both hands,” said Edwards. “His record shows that he’s a massive puncher and we saw that in his last fight against Andrew Selby. He got him out of there in the fifth round and was hurting him on a number of occasions. He’s coming to bring it and he’s going to try and rip that WBC title off me. This is his World Cup final.

“He’s going to put it all on the line. He’s going to be coming hard and fast from early to try and put me under pressure, but I believe my boxing skills and the experience that I’ve gained throughout my short pro career will see me through. I expect to have a punch perfect performance. I believe that he will bring out the very best in me.

“Timing is everything, I believe this is my era. I have arrived at my destination at the right time and I’m loving the journey. This is another legacy fight for me, and I believe that I will build a great legacy. To fight your Mandatory Challenger on one of the biggest cards in British boxing this year is brilliant because it showcases my skills around the world.”

“I can’t wait to challenge for the WBC Flyweight World title in London,” said Martinez. “I’ll be taking that famous green and gold belt back to Mexico with me. I have already knocked out one Brit and on August 31 I will make it two.”

Promoter Eddie Hearn said: “This is another great fight added to a brilliant card at The O2. We saw Martinez knock out Andrew Selby recently in his Final Eliminator and he is an aggressive, fearless fighter who will be coming to try and take Charlie’s belt. Charlie is now established as the best 112lb fighter in the World right now and I expect another brilliant performance from him at The O2. This will be a fast paced, explosive fight and there’s still plenty more to come on this card!”

Adam Smith, Head of Sky Sports Boxing, said: “Charlie Edwards has been an enthralling success story in British boxing and it’s fantastic to add his next WBC title defence to the Vasiliy Lomachenko-Luke Campbell bill.

“Charlie has grown as a fighter since claiming the WBC belt on that emotional night last December, but Julio Cesar Martinez is a real danger-man as shown in that win over Andrew Selby.

“We also have Hughie Fury’s heavyweight clash against Alexander Povetkin on an action-packed evening, with more fights to be added before Luke Campbell’s epic World title battle with Lomachenko.”