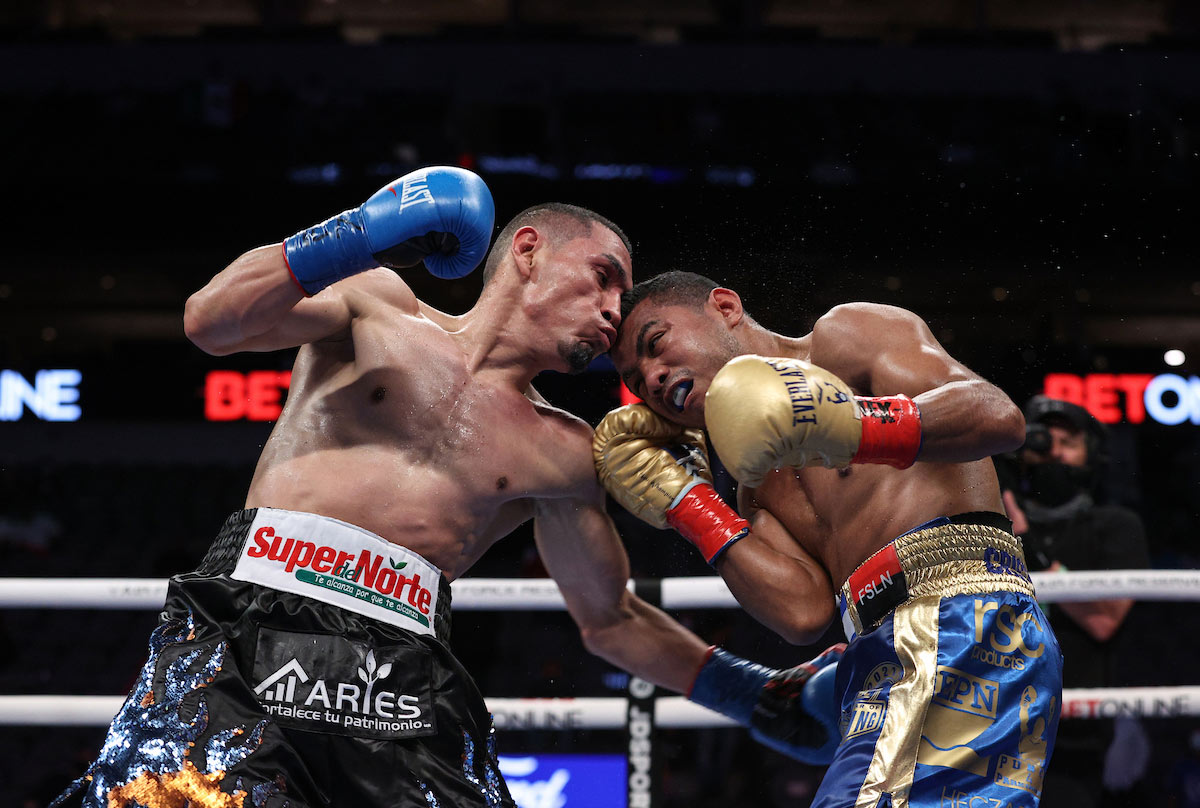 Juan Francisco Estrada and Roman ‘Chocolatito’ Gonzalez meet in an epic trilogy fight on Saturday night (December 3) at the Desert Diamond Arena in Glendale, Arizona, live on DAZN – and the Super-Flyweight legends opened up on their remarkable journeys to the pinnacle of the sport.

TICKETS ARE ON SALE NOW VIA TICKETMASTER

The rivalry between Estrada and Chocolatito spans a decade with the pair first meeting in Los Angeles in November 2012 and then rematching in Dallas in March 2021 – with Chocolatito winning the first and Estrada leveling in Texas.

Ahead of their trilogy battle, Matchroom sat down with both fighters in camp, and while they both had plenty to say on the fight and their futures, they took time to reflect on their incredible paths from poverty to greatness.

“I was born in Managua, in the Esperanza neighbourhood. I was born in a poor family and God has blessed me, enabling me to provide a life for my family and my children and I feel immensely proud to have come from a poor family and to now be able to show lots of youngsters that if I can do it, so can they. It makes me proud. Really proud to have been born in the Esperanza neighbourhood and to have come from the San Judas gym where I spent almost all my time training and still do today.

I feel proud to know that I come from a poor family.

“I’m from Puerto Peñasco, Sonora. I started out in boxing at nine years of age. Prior to that, when I was seven, my mother died. When I went into boxing I followed my path, training, having fights locally and then municipal, interstate contests. At 14 my father passed away and I carried on boxing, my aunt and uncle looked after me and my siblings.

“I thought, now I’ve lost my parents I have my siblings and family still with me and I must achieve something. Sport was something my aunt and uncle always instilled in me, and my brother and I played every sport but I liked boxing. My brother, who’s a year older, said, “Come on, let’s do some boxing training.” And two or three months after he’d joined, I said, “Let’s do it!” And I stayed there. After a while my brother stopped going. He wasn’t a fan of the diet and I stayed in boxing. At 14 I went to a state event in Hermosillo, I was spotted by the national boxing team trainers, (Jose) Alfredo Caballero was trainer there, too. And they said, “Come to Hermosillo and join the Sonora boxing team.

“From 14, through to 15 when I graduated from secondary school, I spoke to my aunt who was responsible for us back then and I told her I’d been asked to go to Codeson, which was the name of the high-performance facility in Hermosillo. And she told me if that was what I wanted, she would support me and she did. I went and stayed there, and I’ve stayed in Hermosillo until the present day. And those were my beginnings. I went to three national championships, I won three gold medals, I went to a fourth and won silver.

We’d really have to hustle to eat. I used to go with my aunt to gather plastic containers.

“When I wanted to join the Mexican national team, there were Mexican fighters that were preferred over me, and I was never called up for a fight. Back then I said to Alfredo, “Let’s go pro now,” my dream was to go to the Olympic Games and that never worked out. And Alfredo decided I should make my debut as a professional at 18 years of age.

“I don’t have any memories of being with my mum or dad. My mother died of Leukemia. My aunt and uncle knew she was ill. My siblings and I would go on holidays to Mexicali with aunts and uncles, my grandparents and that’s how we did things.

“My aunt that was from Mexicali knew a gentleman who I got so close to that I would call him “Daddy.” And he was from Los Mochis, Sinaloa. Over time, I remember being four years old and back then we were in Peñasco and the gentleman spoke to my mother and asked if he could take us with him to Los Mochis on holiday and that was what I wanted. I wanted to go with him because he treated my siblings and I well. And my mother and my aunt all knew that my mother was unwell, and they let me go. So, we went to Los Mochis and from four to seven years of age I was with him.

“He took me to kindergarten, to primary school and I was with him for that entire period. Then when I was seven my mother passed away and my aunt, who would care for us, spoke to my [adopted] father, explaining that she’d passed away. And back then the gentleman was suffering financially, and he couldn’t take me back to Peñasco for the funeral.

“My aunt, when we were in Mochis, she did what she could as we came from a simple family, we had no money for the bus, but she raised some to get us there but not for the return journey, she was struggling to raise funds for that. I remember we came on the train back then. And we went to Puerto Peñasco and that’s where I lived from seven to 14 years of age then at 15, I moved to Hermosillo. I lived there with my siblings, I got into boxing, and I did sports with them.

“Well, when I was in Puerto Peñales at seven years of age, sometimes along with my siblings and my aunt, we’d really have to hustle to eat. I used to go with my aunt to gather plastic containers, we’d help down at the port on ships that came in.

“They’d give us shrimps, fish and we’d sell it, my aunt also made tortillas which we’d sell too. We weren’t there for a long time, then my aunt met a gentleman, and I also grew close to him, and he was like a father to me. He worked in construction and sometimes me and my brother would go and work with him. His brother was a gardener and sometimes we’d go and work with him. We’d struggle through together. In fact, the house my brother now lives in was built by me, my [adopted] father, his brother, my brother, and my aunt too.

“We all did our bit; mixing, laying bricks and we were there for a while. It was a tough upbringing, but I can say it was a happy one.

“When I started boxing at nine years old, at that age a child doesn’t look beyond that. In fact, when I went into the gym, I think I was the only kid who was disciplined because all the kids were only interested in kicking a football around and would go.

“They came to play and have a chat, but I was there to train. My trainer saw that I was serious and gave it everything. So, when I was about 12 or 13, he took me to a professional boxing event. It was the first one I’d been to. It was in San Luís Rio Colorado. I remember watching the main event, the fighter came out in a beautiful outfit and the first thing I asked my trainer was how much a fighter like that earned.

“I remember he told me 25 thousand pesos. And I thought that was a huge amount of money. And even though I was a kid I started to see more fights and I said that one day we’ll be fighting on those cards, earning that type of money.

“When I moved at 15, that’s when I thought, “This is going to be my career.” I finished secondary school, I started upper secondary but as I was moving around to fight a lot in different towns in Mexico, I’d miss lots of classes, so I decided to fully commit to boxing.

“I left upper secondary, signed up to an English course, dropped out of it, and to be honest I was more focused on boxing than studying because I set myself the goal of becoming world champion one day. As I say, from 15 years of age, that was my goal. I said, one day I’m going to be world champion and that was the reason for going to Hermosillo.

“Back then at 15, when I went to Hermosillo, my family, my siblings and I would say, “Well, I have no parents. I have to give it everything to become someone in life.” And I’ve always prepared myself psychologically on my own. Now I’ve got four children. They motivate my every day, my wife who always supports me.

“I met her at secondary school, we’ve been together since we were 17 and thank God we’re still together today. And they are what motivates me. They came to visit me a week ago because I’d not see them for a month and I was happy because my kids are growing up and all of them are my motivation and when I go into the ring and even in training, I’m doing it for them. They are the ones that always motivate me.

“I feel like all the sacrifice, the effort and hard training sessions because boxing isn’t easy. I think it’s one of the most difficult sports out there and I’m happy and grateful to my trainer Alfredo Caballero who has been with me since I was 15. My wife and family have also supported me, and I think that allows me to keep moving forward. And it makes me very happy because I feel I’ve achieved a lot more than I expected to.”