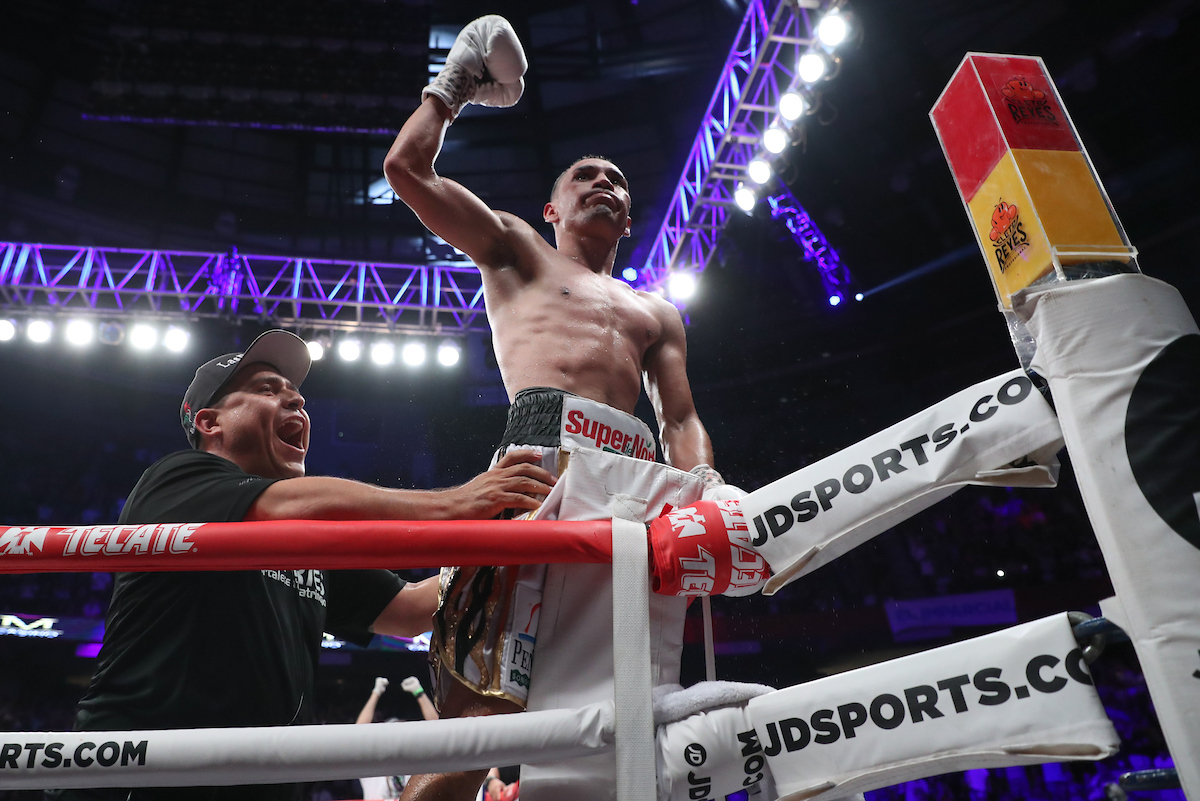 Estrada: I Will Get Revenge In Chocolatito Unification Rematch

Juan Francisco Estrada and Roman ‘Chocolatito’ Gonzalez are hunting a blockbuster unification rematch – and Estrada told Gonzalez in the first ever episode of ‘Peleamundo’, premiering this Sunday on Matchroom Boxing’s YouTube channel, that he is confident of settling the score if the pair can meet again.

ESTRADA AND GONZALEZ DISCUSS A POTENTIAL REMATCH AND EDDY REYNOSO TALKS ABOUT POTENTIALLY TRAINING ANDY RUIZ JR. IN A PREVIEW OF THE FIRST TWO EPISODES OF ‘PELEAMUNDO’

Estrada (40-3 27 KOs) and Gonzalez (49-2 41 KOs) both regained their World champion status in stunning fashion in recent outings, with Estrada beating Srisaket Sor Rungvisai in a rematch to regain the WBC and Ring Magazine Super-Flyweight belts last April and ‘Chocolatito’ rolling back the years to rip the WBA strap from previously unbeaten Brit Kal Yafai in Dallas in February with a clinical ninth round KO win.

The pair met back in November 2012 as Gonzalez successfully defended his WBA Light-Flyweight title against Estrada in Los Angeles, and with both men holding World title straps, they told Jessie Vargas that they would love to renew their rivalry with higher stakes, and ‘Gallo’ confident of exacting a spectacular revenge.

“I’ve had three losses and I’ve avenged two of them,” said Estrada. “I haven’t been able to avenge my loss to Gonzalez yet because we never fought again, but hopefully this time around, I will win, and that loss will be avenged as well.

“I’m the champ. I have a lot of respect for him. It’s a big fight and we both deserve big purses.
Everything looks and sound good but it’s all about the money. We’re friends and both fighting for our families. I want to unify if I’m given the opportunity. I’ll fight whatever opponent is available. I know there will be some good fights made by the promoters.

“I don’t know Yafai personally, however I do know Roman, and he’s a great champion. I know he had a lot of support from the people of Nicaragua. I was happy for him because he’s such a humble person. Without a doubt I was with Roman Gonzalez in that fight.

“It’s been eight years [since the first fight] and I’m very excited for this fight. I believe the people really want to see it as well. I’m a great fighter. It’s going to be a great show. It’s going to be a better and bigger fight than the bigger weight classes.”

“I’m a lion in the ring,” said Chocolatito. “We put in the work to win but after we can be friends, and everything will go back to normal.

“It’s going to be a very good fight. Everyone talks before the fight but all that matters is the day of the fight. We both need to just demonstrate to the public that the lighter weight divisions can put on a good show. We’re the ones carrying boxing right now, the smaller weight classes, and when If I fight Estrada, it’s going to be historical.”

Gonzalez and Estrada are the main feature of the first episode, which also includes Vargas speaking to hot prospect Diego Pacheco, while episode two is also in the books ready for next weekend and is led by one of the best trainers in boxing today and one of his World champions.

Eddy Reynoso was named as Ring Magazine trainer of the year for 2019 and hit the headlines this week as former Heavyweight champion Andy Ruiz Jr expressed an interest in training with Reynoso alongside superstar Canelo Alvarez.

“I’d love to work with such a charismatic Mexican fighter like Ruiz,” Reynoso told Vargas. “It would be a proud moment as a trainer.

“He needs to work on discipline. Once you get to world championship level, you can’t lack discipline. I would have him work on moving his waist more and his counter punch. It would be work on his punches, keeping them short. Those are things I think would benefit him and bring him to the next level.”

Reynoso’s gym is packed full of talent, not least in the shape of Julio Cesar Martinez, the exciting WBC World Flyweight champion who joins Reynoso in episode two, while Vargas is also joined by Marc Castro, the amateur talent itching to make his pro debut when boxing returns having signed with Eddie Hearn and Matchroom Boxing USA.