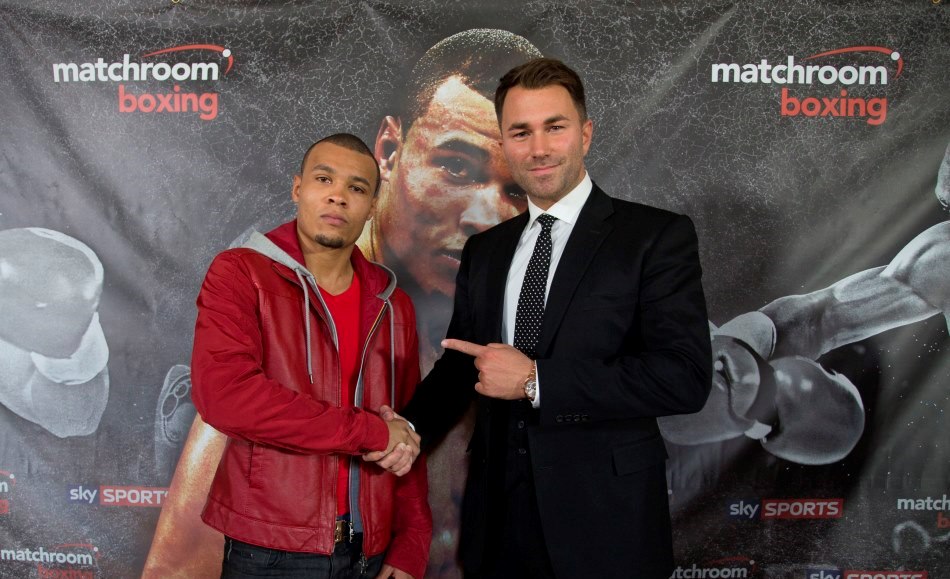 Chris Eubank Jr will face American Tony Jeter on his Matchroom Boxing debut at the Sheffield Arena on Saturday October 24.

Maryland-man Jeter – ranked at 13 in the WBA and WBC and 15 with the WBO – plans to spoil Eubank’s bow under new promoter Eddie Hearn, saying his will to win will be the difference on the night.

A hotly-anticipated showdown between Eubank and Irishman Spike O’Sullivan is in the works for December 12 at The O2 in London – but Jeter believes he’ll wreck those plans in Sheffield.

“He hasn’t fought someone like me who will give 100 per cent of themselves against him,” said Jeter. “I won’t leave anything in the dressing room. My will and determination are my greatest assets and

“Chris is a quality operator – you don’t get a piece of a World title without being a class act. But that just makes it an even bigger opportunity for me; I’ll have a win against a huge name on my record and I’ll land on the World scene in a big way.”

Jeter will arrive in the Steel City over a week ahead of the fight to acclimatise to his second fight on European soil having faced Patrick Nielsen for the WBC Silver belt in February 2014.

‘Mo Better’ admits to being a big fan of Chris Eubank Sr. and knows that Chris Jr. shares many traits of the former two-weight World champion – but says that the son is not the fighter his father was and that there are no pre-fight mind games that can put him off his task.

“I’m from the East Coast; those guys are really crazy,” said Jeter. “It is tough being a fighter here. Other guys in the gyms want to take your head off to stop you from getting their fights. So Chris cannot do anything that I haven’t seen before – in or out of the ring.

“His Dad was one of my favourite fighters – his fights with Benn were awesome and I loved everything about him, his skill, his heart, his determination and his swagger. You can see a lot of that in his son – but he’s not the Dad, he’s not really been tested yet and we’ve not seen what he’s really got when the going gets tough.

“I’ve never taken any punishment in fights and I feel fantastic – really fresh. When I lost to Patrick Nielsen in Denmark I carried a bad back injury into the fight which was a major factor in the bout. I’m coming a long way for this fight and getting here early – there’s no excuses, I’m travelling too far not to win this.”

Jeter’s clash with Eubank is part of a huge night of action in Sheffield as Kell Brook defends his IBF World Welterweight title defence against Diego Chaves and unbeaten Doncaster ace Gavin McDonnell defends his Super Bantamweight strap for the first time against Jeremy Parodi.