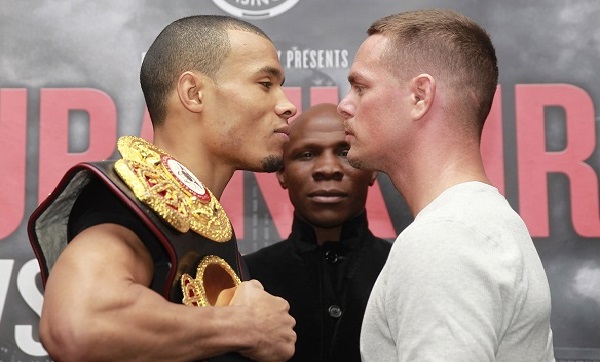 Eubank Jr: My Sky Debut Will Be Explosive

Chris Eubank Jr. wants to put in an explosive performance on his Sky Sports debut on Saturday night – and has warned opponent Tony Jeter that he’s going to be in for a tough night at the Sheffield Arena.

Eubank defends his WBA Interim Middleweight title against the American in the Steel City this weekend, a first fight for the Brighton man since landing the belt against Dmitry Chudinov in February.

The 26 year old dazzled against the Russian, stopping him in the final round to land the title – and demonstrating he’d adjusted to the championship distance following his slender loss to Billy Joe Saunders three months earlier.

Further adjustments are happening behind the scenes with Adam Booth joining Eubank’s training set up alongside Ronnie Davies – and although Eubank says that the full impact of Booth won’t be felt until his fights down the line, he intends to put Jeter to the sword on Saturday.

“I’ve been out of the ring for eight months so there’s a lot of frustration to come out and unfortunately for Tony Jeter – he’s going to feel the full force of that,” said Eubank.

“If it was up to me I would fight every month. The more I am in the ring, the more focused I am, the more energy I can feel coursing through my body. I love being continuously active and I think we are going to be looking to fight every three months at least.

“Adam has come in and gelled perfectly with the rest of the team, so the early signs are looking good. It’s not going to be overnight that the new things we work on are seen, but I am sure that fight by fight the improvements will be visible. Adam is an extremely experienced trainer at the elite level, we’ve got history together as I have trained in his gym in Purley, so we tested out working together and it worked well so we’re going for it.

“I learnt a lot from losing to Saunders and against Chudinov, you saw me put into practice what I have learnt from that, and from now we can only hope to get the rematch on in the next year – I want it and so do the public.”

Eubank Jr’s Sky Sports debut is part of a big night of action in Sheffield as Gavin McDonnell defends his European Bantamweight strap against former World title challenger Jeremy Parodi, Leigh Wood faces Josh Wale in an eliminator for the British Featherweight title, the hotly anticipated clash between Sheffield’s Atif Shafiq and Derby’s Jamie Robinson and a host of young local talent is also in action.