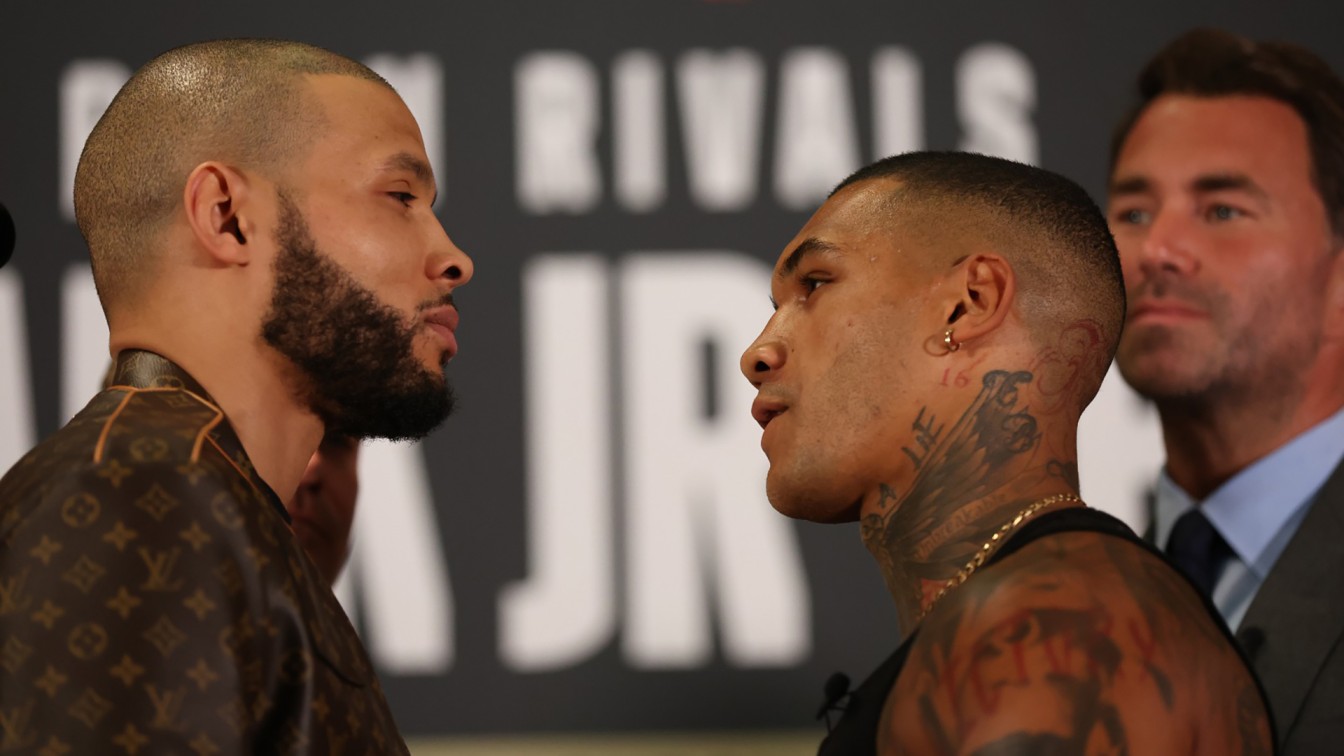 “Well good afternoon everyone and welcome to this press conference in London to announce what I still can’t really believe. I’m sure many of you sitting here can’t quite believe it as well. Eubank Jr against Benn. October the 8th, O2 Arena, live and exclusive on DAZN PPV.

“I wish we had seven O2 Arenas – this fight is an absolute monster. The biggest in British boxing, perhaps one of the biggest ever in the sport in this country. I’m delighted to be sitting here alongside our co-promoter Kalle Sauerland and Wasserman Boxing. Thanks to Kalle, Team Eubank, Team Benn for coming together to make this iconic fight.

“We all grew up with this rivalry. The greatest rivalry in British boxing. In 1990 I was 11 years old and I remember one of the greatest nights for our family, when Chris Eubank Snr stopped Nigel Benn to win the world Middleweight Title in Birmingham. Three years later I remember the night so clearly, a hazy night at Old Trafford, over 45,000 people, 15 million on terrestrial TV watched the rematch.

“Now almost 30 years on we get to see part three. An incredible moment, these two step up for what will be the biggest fight in British boxing.”

“It has been a long, long, road; not as long as some people think however. The starting gun was fired a little early when people thought the deal was done when we had not actually exchanged contracts yet, but we are dealing with a monster. Not a monster for the Heavyweight World Championship, not a unification, not a grudge match; we’re dealing with a family feud. A feud that started on the November 18, 1990 and one that made me fall back in love with boxing.

“The interest around what happened back then, 19 million viewing on terrestrial television, 500 million viewers around the world, you don’t need to sell it. At the same time, look at the gladiators we have up here. They have fought their way out of their father’s shadows in their own right. They sit up here now, and  put it all on the line – family legacy, I don’t think there’s any title you could place on it that is bigger than that.”

“Nothing like this has ever happened before in the history of the sport, two legends went into a ring 30 years ago and inspired a nation. They became superstars and etched their names into not just boxing history, but British history. Now, 30 years later, their son who have both made themselves in the sport of boxing are going to get in the ring.

“The Eubank and Benn name are going to go to war for the third time. Nothing like this has ever happened before and I don’t think it will happen again, ever. That’s why I took this fight. We have to uphold those names to the best of our ability, that’s where it makes it personal for me. I have to make sure the Eubank name stays on top of the Benn name.

“If I’m at 100% then it’s a public execution. I’ll be 60% on the night and that’ll be enough to do whatever I want with you. I don’t hate anybody I would ever give anyone that type of power over me. I don’t even dislike Conor,” he said. “But at the same time this fight is personal. The things his father put my father through, I can’t forget and I can’t forgive.

“I watched the mental toll and the injuries. Him going to hospital and losing half his tongue. I watched Nigel tell my father on national TV that he hated him. These are things I can’t forgive. This is a fight where our family names are on the line and we have to uphold them. That’s where it makes it personal.”

“It’s unbelievable. I feel privileged to have been with his father for all of those years – 20 odd World Title fights with him. I’ve got the same again with his son, I was there when he was born and I’ve always been with him.

“I think it’s going to be a great fight. The first Eubank-Benn fight was brutal, I was in the corner and I could hear them saying, ‘is that all you’ve got, you’re punching like a girl’. You could hear the power. After the fight I said to Barry, ‘you can’t let them fight again, no man should have to go through that again’.

“I think this next fight will be just as brutal. They’ve both got that passion which I saw in their fathers. I knew them both well. I’ve got the greatest respect for Conor Benn and his trainer Tony Sims. I go back a long way with Tony. It’ll be a great fight. Eubank is too battle hardened and too big for Conor. Conor’s time will come again but he will get beat.”

“I’ve said that numerous times. This is a fight that makes sense for now. The World Title is still the goal, but this is once in a lifetime. This is a fantasy fight for the British public. Forget about how far apart we were when I first turned pro, the names were still mentioned to me. Eubank was still mentioned to me before I even had my debut fight. It’s just been brewing, and the stars have aligned for October 8th.

“As Chris said, we’ve both walked the same road so you’ve got to respect that. I respect all fighters. But when we get in there we will settle the family business. I’m taking care of the family business. The last fight was a draw. It’s about time I set the score straight.

“I think this fight was always aligned to happen, even from the first day that Conor Benn put gloves on. It’s always been spoken about. Like Conor said, it’s a fight for the British public, it’s probably the biggest fight of this decade or of this generation.

“Obviously I wanted to see the fight happen and I believe in Conor Benn. He’s so diligent in his training and the knowledge of his boxing game. I believe that the weight at 157 is what Chris Eubank’s team asked for, we agreed to that. I believe he will be strong at that weight, Conor Benn.

“That was a big factor in taking this fight. Conor really wanted the fight, I spoke to Nigel on the phone about it and Nigel said the fight is ready to happen. We’re here now and October the 8th is not far away. Me and Nigel go back a long way and I was actually sparring with him around that time. I was at the second fight at Old Trafford. What great fights they were, they’ve lived on through the past 30 years.

“People still talk about those fights, and for this fight to happen now, I always thought this day would come. I always thought this fight would happen. The time is right now for it to happen. What a fight it’s going to be. Chris Eubank Jr is a great fighter and a fantastic athlete, Conor Benn is the same. They’re both their father’s sons and they both speak like theirs fathers and they both fight like their fathers. I expect a great fight on October 8thand obviously I’ve got confidence in my fighter Conor Benn being victorious.”