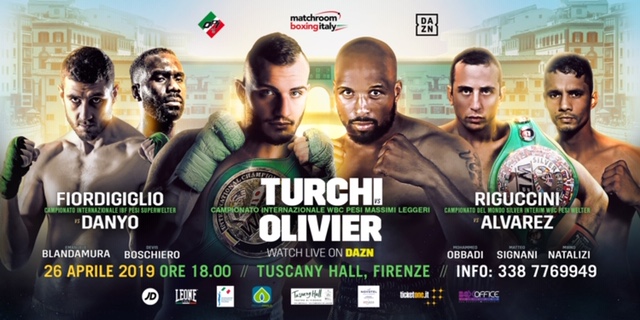 Matchroom Boxing Italy, Opi Since 82 and DAZN return to Florence on April 26 with the third instalment of their historic eight-year joint venture in Italy as rising star Fabio Turchi steps up again to fight for the WBC International Cruiserweight crown at the Tuscany Hall, shown live on DAZN.

Turchi (16-0, 12 KOs) defended his WBC International Silver belt with a seventh-round stoppage win over former Commonwealth Champion Tony Conquest in November and now ‘Stone Crusher’ has the opportunity to go for the full title when he meets Frenchman Jean Jacques Olivier (10-2, 7 KOs) over 12 rounds.

Undefeated Tuscany KO artist Allesandro Riguccini (22-0, 18 KOs) picked up the interim WBC Silver Welterweight title against Andres Villaman in October and he makes the first defence of his title against Mexico’s Ivan Alvarez (28-9-1, 18 KOs) in only his second outing on home soil.

Tickets will be released soon on www.ticketone.it and www.boxofficetoscana.it. For further information call 3387769949.

Eddie Hearn said: “I’m excited to return to Florence after another sell-out show in Milano. We’ve already seen the huge potential that Italy has to offer with our first two shows and I’m expecting another sell-out in Florence. Local hero Fabio Turchi is quickly establishing himself as a star of Italian boxing and on April 26 he takes another step towards a shot at the Cruiserweight Championship of the World.”

Christian Cherchi of Opi Since 82 said: “We are delighted to be back in the beautiful city of Florence for another action-packed card featuring three title fights and a host of former Champions. Our first two events in Florence and Milano were hugely successful and I’m predicting another brilliant night of boxing on April 26, shown live on DAZN.”

Veronica Diquattro, DAZN EVP Southern Europe, said: “After the success of the event in Milan, we are very happy to come back to the city where our adventure has started. We want to keep working in order to bring boxing back to being a popular sport in Italy through high-level fights that bring people closer to this sport that over the years has given incredible emotions and historical moments to all its fans.”