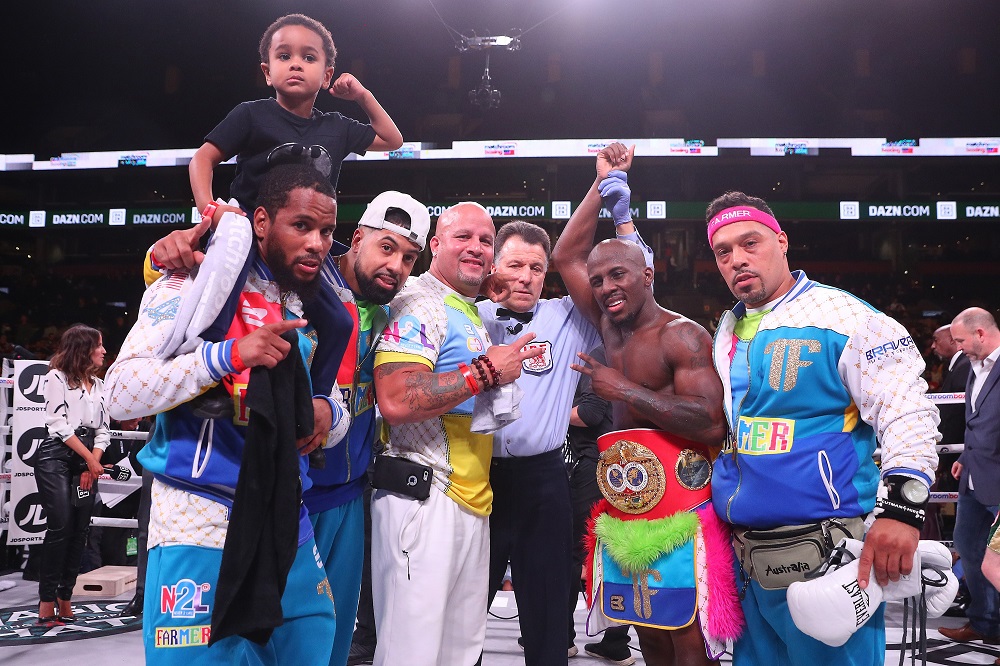 Tevin Farmer will defend his IBF World Super-Featherweight title against Francisco Fonseca at Madison Square Garden in New York on December 15, on the undercard of Canelo Alvarez challenging Rocky Fielding for the WBA World Super-Middleweight title, live on DAZN and Sky Sports.

Farmer (27 – 4 – 1 6KOs) makes the second defense of his crown under two months in his third fight in just over four months after he first put the belt on the line in Boston, where he blasted hard-hitting Northern Irishman James Tennyson away inside five rounds in a fantastic performance on DAZN.

The Philadelphia ace looks to crown a great year in his career in style at the Manhattan boxing mecca with a third huge win, having landed the vacant title in Australia in August with a landslide points win over local favorite Billy Dib in Sydney – erasing the disappointment of his controversial loss to Kenichi Ogawa in Las Vegas in December, with the hotly-contested split decision reversal changed to a no contest following the Japanese failing a drug test.

Farmer has set his sights on a unification clash with WBA champion Gervonta Davis in 2019 as he aims to stamp his name as the premier fighter at 130lbs, but Fonseca (22 – 1 – 1 16KOs), whose sole blemish on his career was in a clash for the IBF crown with Davis in August 2017, is confident of ruining those plans and enters the bout on the back of three stoppage wins inside five rounds.

“Another day, another big night,” said Farmer. “I’m looking to do the same thing that I did to Tennyson – but much faster.

“I’m on another level and people are starting to realize. Right now, I’m just trying to make history with every fight. December 15 I will show everyone once again that I am one of the best in the world.”

“I’d like to thanks Tevin Farmer for the opportunity,” said Fonseca. “I see his focus is on Gervonta Davis, not on me – but you have no idea the opponent that you will clash with on December 15.

“I hope you’re prepared so we can give the public a great fight. In the name of God, I’ll be the new IBF World Champion. I’ll guarantee my name will never be forgotten by the people that watch us fight and I’m ready to make history.”

“Tevin Farmer is one of the most inspirational stories in boxing,” said Lou DiBella, President of DiBella Entertainment. “He’s won 20 fights in a row and is one of the fastest improving young stars in boxing. I’m pleased that, with Eddie Hearn and DAZN, he is now the most active champion in the ring. It’s a tremendous opportunity to be on the Canelo-Fielding bill.”

“It’s brilliant to Tevin straight back out after his big win in Boston,” said Eddie Hearn. “We are keeping our guys nice and active and Tevin gets his chance to go again on the biggest stage at Madison Square Garden against Fonseca.

“2019 is going to be a monster for Tevin but he must get the job done next Saturday – I can’t wait to see him light up the Garden live on DAZN.”

Canelo vs. Rocky is a 12-round fight for the WBA Super Middleweight World Title presented by Golden Boy Promotions in association with Matchroom Boxing. Lemieux vs. Johnson is a 12-round middleweight fight presented by Golden Boy Promotions and Eye of The Tiger Management. The event is sponsored by Tecate, “THE OFFICIAL BEER OF BOXING,” and Hennessy “Never Stop. Never Settle.” The event will take place Saturday, December 15 at Madison Square Garden in New York City and will be streamed live on DAZN.