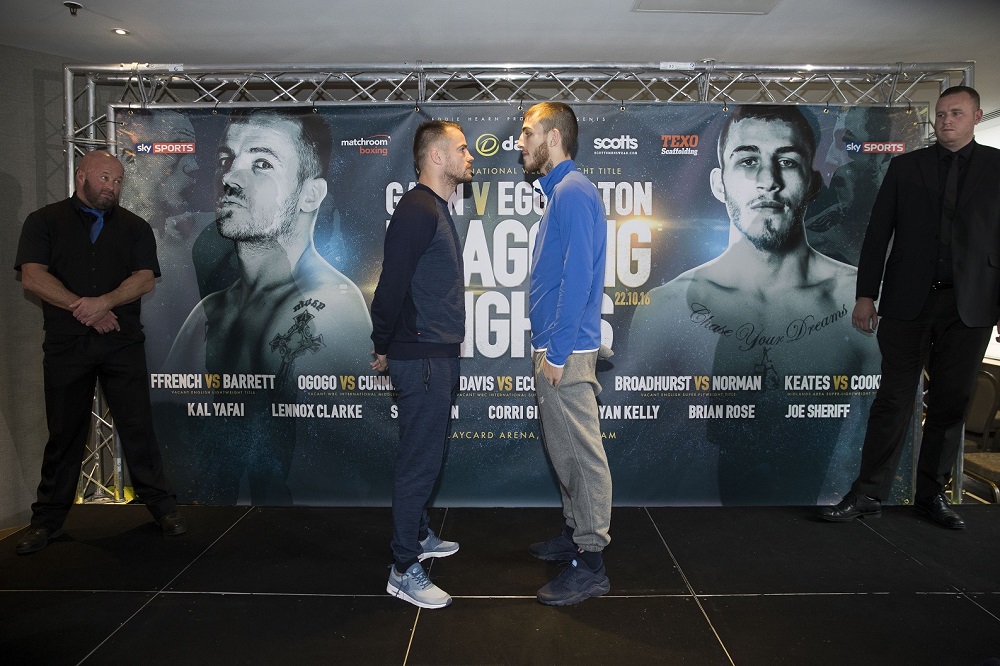 Gavin: I Beat Eggington Every Day Of The Week

Frankie Gavin says he beats Sam Eggington every day of the week – and will prove it on Saturday night when they clash for the WBC International Welterweight title at the Barclaycard Arena in Birmingham, live on Sky Sports.

Gavin and Eggington meet in a local derby that has grown fiercer by the day as the stakes become clear – promoter Eddie Hearn told today’s press conference that the loser’s career at the top level could be finished, a fate both fighters agreed with.

Gavin has boxed for a World title when he met IBF champion Kell Brook in May 2015 and the pair were set to meet for Eggington’s British and Commonwealth belts this time last year but Gavin pulled out of the fight with a foot injury.

Eggington has since surrendered those crowns to Bradley Skeete, who Gavin beat in November 2014, and Gavin believes that he’ll claim the vacant WBC International crown and move onto bigger things with a KO victory over his local rival.

“I beat Sam every day of the week,” said Gavin. “We know what Sam is going to do, he’s going to come and fight because he can’t sit off me, so it’s up to me to keep him off me, box his head off and land my big shots.

“He’s not the brightest, you can tell that by listening to him, but he’s game and he’s got grit, determination and gives it 100 per cent, so this is going to be a tough fight. He’s not got the best boxing IQ. I will say what I want about him though because I am going to knock him out.

“Skeete beat Sam easy. Before that fight Sam was getting rid of everyone, but the minute he gets in with a mover, he struggles. I probably won’t move as much as Skeete but my lateral and head movement is better and I punch inside better.

“This is the only domestic fight I would take. I want to make an impact on the World scene and it’s fighting the likes of Chris van Heerden after this one that would get me back up there.

“Hearing that he’s more spiteful in the gym since losing to Skeete is just nonsense. You know what you are going to get with Sam, he’s not going to come out and be technical; he’s just going to come forward. He’s technically poor and I am a lot harder to hit than Skeete, I am a smaller target and a southpaw. Even if he has improved, it’s not going to make any difference, I am better than him and I’m going to stop him.”

Gavin and Eggington clash on a huge night of action in Birmingham with the chief-support provided by Olympic bronze medal star Anthony Ogogo and Birmingham man Craig Cunningham meet for the vacant WBC International Middleweight title.

Tickets are on general sale priced at £40, £60 and £100 and are available from http://www.barclaycardarena.co.uk/whats-on/matchroom-boxing. VIP tickets priced at £150 are exclusively available from www.matchroomboxing.com

Face value tickets for October 22 are also be available from http://www.stubhub.co.uk/matchroom-boxing-tickets/ . StubHub is the official ticket partner and marketplace of Matchroom Boxing and Anthony Joshua.