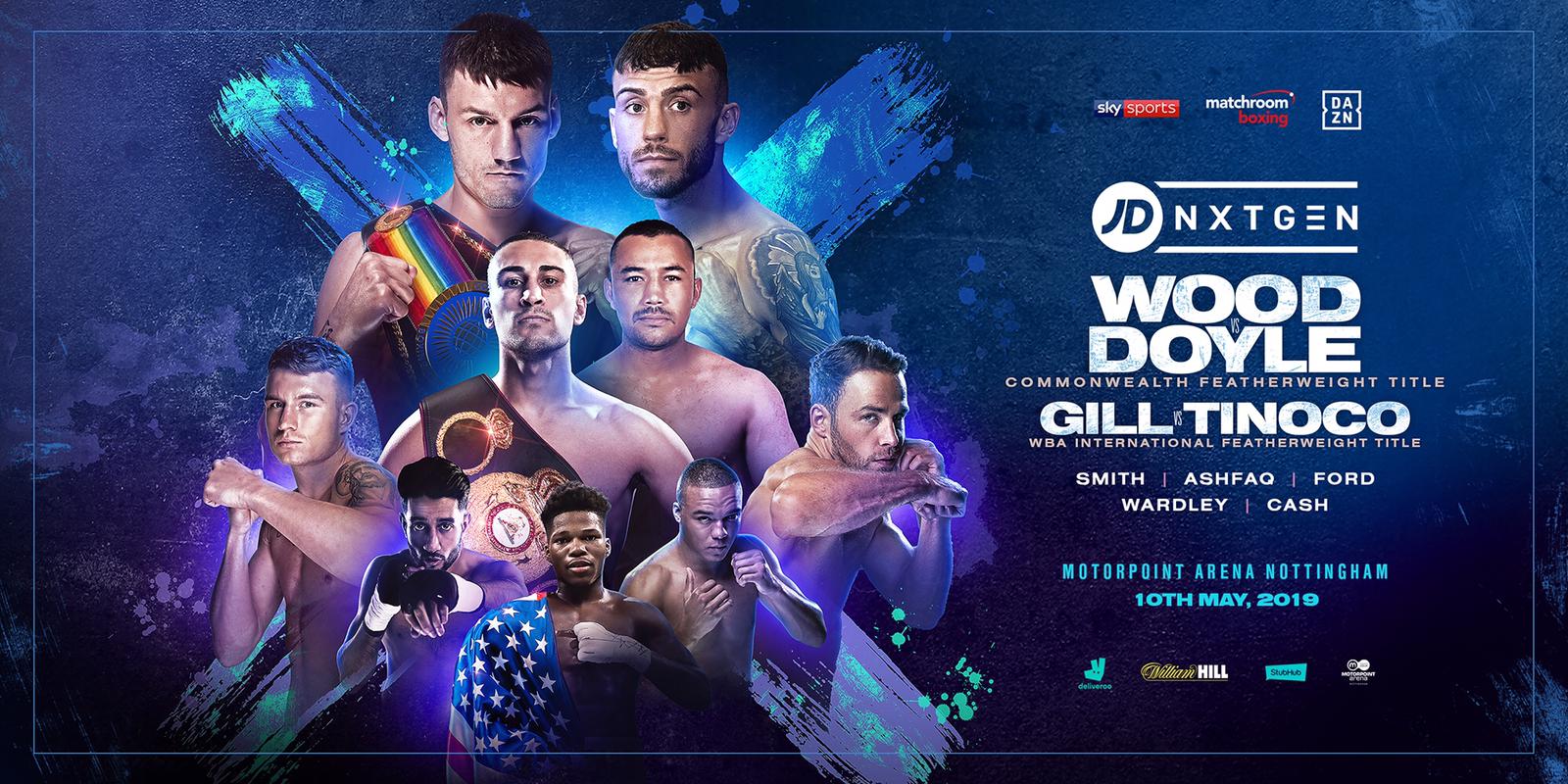 Jordan Gill defends his WBA International Featherweight title against Enrique Tinoco on the same night that Leigh Wood makes the first defence of his Commonwealth Featherweight crown against Ryan Doyle in the latest instalment of the JD NXTGEN series at the Motorpoint Arena Nottingham on May 10, live on Sky Sports in the UK and DAZN in the US.

Chatteris talent Gill (23-0, 7 KOs) broke into the WBA’s top 15 world rankings when he outclassed and stopped Mexico’s Emmanuel Dominguez in 3 rounds to win the International Featherweight strap and is wasting no time as he defends his title against another tough Mexican in Tinoco (17-5-4, 12 KOs).

“Getting out again so soon after my win in Peterborough is great for building the momentum,” said Gill. “I want to stay fresh in everyone’s minds and to keep on building and learning is important. To keep on winning and improving is the main aim and I can’t wait to get out again on May 10.”

“I don’t know too much about my opponent. I know he’s tough and very seasoned, he went the distance with Devin Haney who’s an unbeaten and well-ranked Lightweight. He’s considered one of the best up-and-coming Lightweight prospects in world boxing and if he couldn’t put Tinoco away then I know I’m in for a hard night.”

Wood (21-1, 11 KOs) claimed the Commonwealth belt by halting Abraham Osei Bonsu in two rounds at the East of England Arena in Peterborough last month and jumps straight back into title action against former champion Doyle (17-3-1, 9 KOs) as he looks to cement his name in the Featherweight division.

Doyle stopped Reece Bellotti in 5 epic rounds to claim the Commonwealth title last year before surrendering his title to emerging star Jordan Gill at the Copper Box Arena in October, and the Manchester man is out to recapture his old belt on away soil.

“It feels surreal to be topping such a big show in my home city with Jordan,” said Wood. “I’ve been banging on for a while now about bringing big time boxing back to Nottingham. It’s been seven years since Carl Froch last boxed here so it’s been a long time coming. Being the main flagbearer for boxing in my city is a big honour.

“Although I was happy to win the Commonwealth title it was a fairly easy win for me. I think I need to beat a champion or a former champion to feel worthy of winning the title and I want to be tested as well. It’s going to be a hard fight with Ryan Doyle, he’ll test me and I’m looking forward to it.

“When Froch retired a lot of fight fans had nobody to follow and they’ve been craving someone to support and get behind for a while now. People from Nottingham always get behind one of their own and I’m expecting a huge turnout on May 10 with a lot of noise.”

Unbeaten Wokingham Middleweight Felix Cash (11-0, 7 KOs) produced a stunning display to capture the vacant Commonwealth title in one round against Rasheed Abolaji at The O2 in February and returns to make the first defence of his title as he eyes a shot at the Lonsdale Belt in 2019.

Undefeated Ipswich Heavyweight Fabio Wardley (6-0, 5 KOs) is quickly making a name for himself as a force to be reckoned with and the Dillian Whyte-managed powerhouse continues his march up the Heavyweight ladder in Nottingham.

Exciting New Jersey Super-Featherweight prospect Raymond Ford (1-0) fights in the UK for the first time as a professional after getting off to winning ways on his pro debut on the Tevin Farmer vs. Jono Carroll undercard in Philadelphia last month and Denaby Lightweight Terri Harper (6-0, 3 KOs) gets another opportunity on the big stage after winning the WBC International Female Lightweight title in her last fight.

“I’ve been looking to return to Nottingham for years and now we have the perfect chance to do it with Leigh Wood and a great line up of talent,” said Eddie Hearn. “It’s been nearly 7 years since that unforgettable night when Carl Froch dethroned Lucien Bute and we hope we can now put Nottingham back on the map as a more regular stop within the boxing calendar.

“Leigh Wood has always had a strong following and now he holds a notable title he has a chance to cement himself with victory over Manchester’s Ryan Doyle. Jordan Gill has become a standout star and he gets straight back to defending his title while Commonwealth champ Felix Cash also returns.