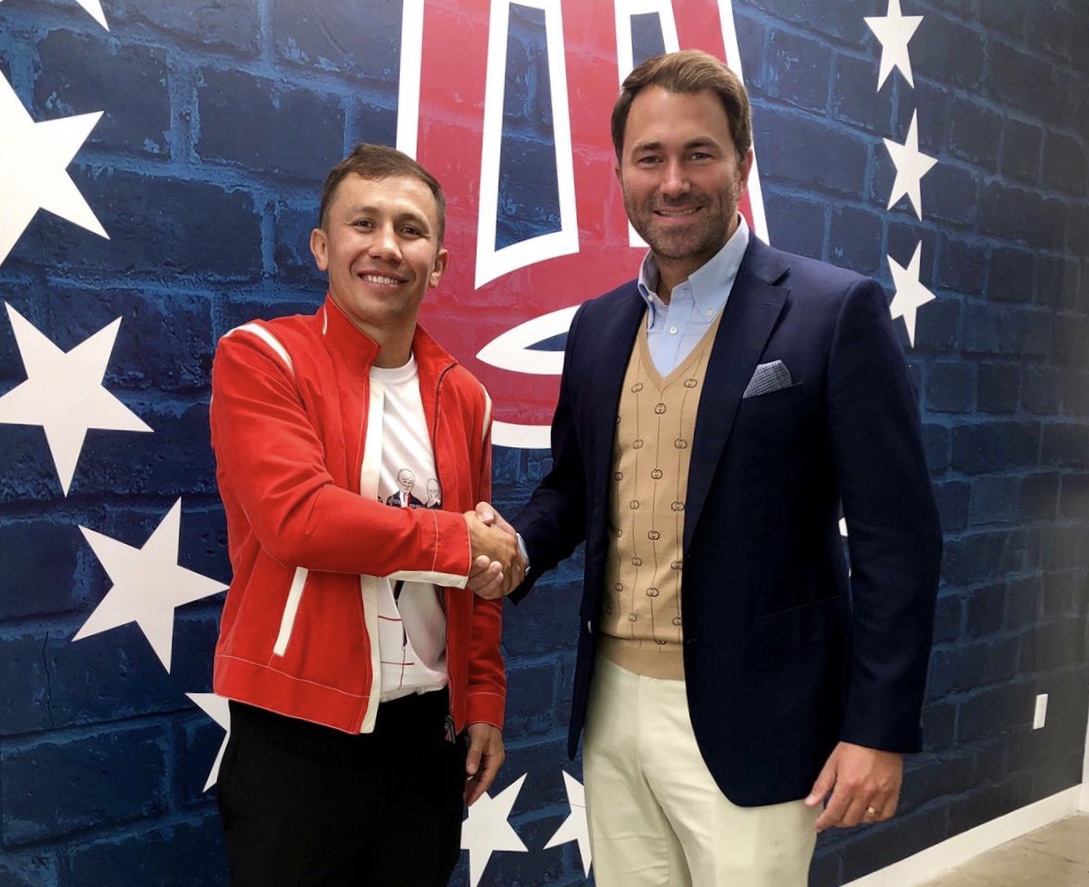 Gennadiy Golovkin and Eddie Hearn today announce that their companies GGG Promotions and Matchroom Boxing USA have agreed a deal to work together to promote future GGG events moving forward, beginning with the Golovkin vs. Sergiy Derevyanchenko fight for the vacant IBF World Middleweight title on October 5 at Madison Square Garden in New York, live on DAZN.

The former unified Middleweight king began his journey back to the top of the 160lbs division in June with his first fight on DAZN after signing a six-year deal with the streaming giants, dismissing game American top-ten contender Steve Rolls inside four rounds at Madison Square Garden.

Golovkin (39-1-1 35 KOs) returns to the mecca of boxing in Manhattan to challenge the Brooklyn-based Ukrainian for the IBF crown that Golovkin held for three years before being stripped following the first of his two epic battles with Canelo Alvarez in Las Vegas. Derevyanchenko (13-1 10 KOs) then faced Golovkin’s old foe Daniel Jacobs for the belt at the Hulu Theater at MSG in October, coming out on the wrong end of a split decision that many believed should have gone the other way.

Golovkin and GGG Promotions have worked with Hearn’s Matchroom Boxing outfit before to great effect, travelling to the UK in September 2016 to make a successful defense of his Middleweight titles against Kell Brook in a blockbuster night at The O2 in London, stopping the Sheffield ace in five rounds, and the 37 year old is thrilled to be teaming up with Hearn as he targets World honors and unification battles in the near future.

“My promotion company and I are happy to partner up with Eddie Hearn and Matchroom to bring the fans what they want – the best boxing and the best events.  By teaming up with Matchroom, we stress that GGG Promotions is committed to presenting the biggest events in the most important arenas. I’m always happy to work with the best in business, and I’m looking forward to what this collaboration will bring to the boxing fans.”

“It’s an absolute honor to be involved with Gennadiy Golovkin’s career moving forward,” said Hearn. “I’ve long admired Gennadiy as a fan and how he conducts his business and we team up at a very exciting moment. Gennadiy is one of the most recognizable and entertaining fighters on the planet and I can’t wait to get started to work together on the upcoming World title challenge against Derevyanchenko at MSG on October 5.

“We know the world wants to see the Canelo trilogy but there are so many opportunities out there for Gennadiy all over the world and we look forward to working together on them. First things first is for Gennadiy to win the title on October 5.”