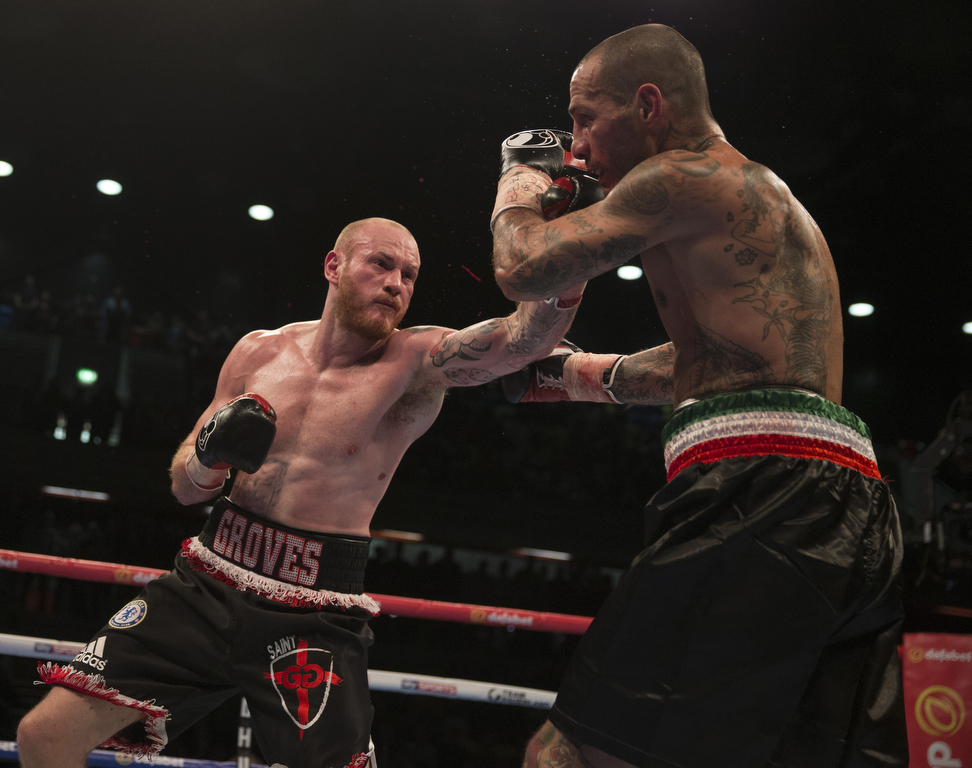 Groves Faces Brophy In Battle Of Britain On April 9

George Groves will face David Brophy in a Super-Middleweight battle of Britain at The O2 in London on April 9, live on Sky Sports Box Office.

Three-time World title challenger Groves meets the Scotsman over 12 rounds on the undercard of Anthony Joshua MBE’s World Heavyweight title clash with Charles Martin, as the Londoner aims to stay on track for a fourth shot at World honours.

Groves returned to the ring in style in January, stopping Andrea Di Luisa inside five rounds at the Copper Box Arena in east London in his first fight with new trainer Shane McGuigan, and ‘Saint’ George’s promoters Sauerland are in talks with Eddie Hearn for a summer showdown with St. Helens’ Martin Murray, but must get past the Scotsman first.

“It’s nice to be in a domestic dust-up!” said Groves. “David is an undefeated fighter so I’m sure he will be coming with a lot of confidence. It’s great to be back on Sky Sports and part of a great Box Office line-up. I’m looking forward to it.

“I had a good performance last time out against Di Luisa and I will be using that momentum going in this fight. Hopefully I’ll get a similar result and we can move on to the bigger fights in the summer.

“The work with Shane is going well. I think we will see even more improvements. The sparring has been better, the technical sessions have been better. I think that will come out more and more in this next fight.

“I’m sure it won’t be long until back in the World title mix. There’s plenty of big fights out there for me, and I’m willing to fight anyone, so we will see what routes open for me.”

Groves’ promoter Kalle Sauerland said: “George has never shied away from a challenge, and on April 9, he’s back in action against a young undefeated prospect. This will be another good test for George and a chance for him to showcase more of the improvements he has made since teaming up with Shane McGuigan. It’s an exciting time for the ‘Saint’ with a lot of big fights on the horizon.”

Unbeaten Brophy – 16-0-1 – will have other ideas though and the Caldercruix talent can gate-crash the upper-reaches of the 167lbs division if he can land a career-best win in Greenwich.

“This is a massive opportunity for me,” said Brophy. “I have done my apprenticeship and I have waited patiently for a chance, so this is a great chance for me to show what I can do on an outstanding show.

“I said yes to the fight straightaway. I didn’t even know how many rounds it was, or anything about the money, I just said yes. I haven’t been in the limelight, you never really are in Scotland, so opportunities don’t come too often and you miss 100 per cent of the opportunities you don’t take.

“I don’t mind being the underdog. I know people will say I am the underdog straight away and George is a good fighter and I know that. But I am more than prepared for this step up and I will give it everything I have got. I feel really confident and I would have taken the fight if I wasn’t. I’m not here to make up numbers and that’s the first mistake that anybody will make. I’m there to do a job.

“I expect George to be fast and to try and do a job on me. I feel as if he is going to have a big fight in the summer, and whatever that is I think they will be treating me as a stepping stone and that is even better for me because I don’t mind being the underdog and I don’t mind going into somebody’s back garden either.”

Groves’ clash with Brophy is part of a huge night of action in London topped by Joshua’s first World title fight, as Lee Selby defends his IBF World Featherweight title against Eric Hunter, while there’s a key Middleweight battle between former World title challengers Matthew Macklin and Brian Rose, plus more fights to be confirmed soon.