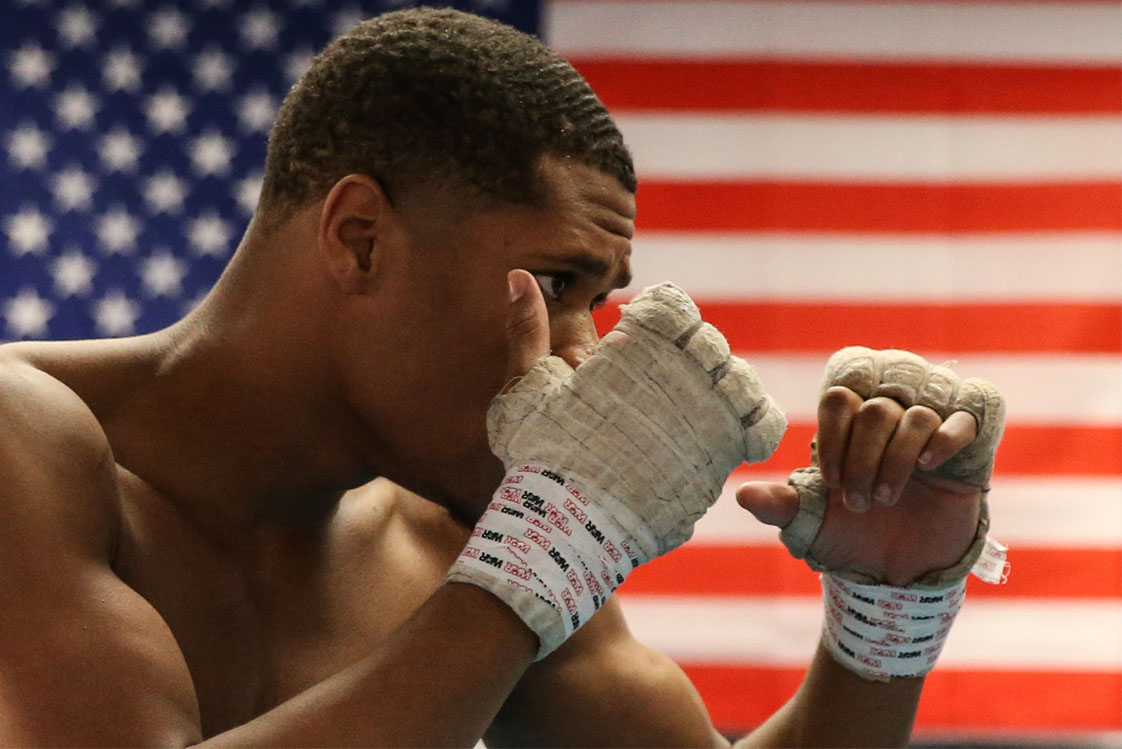 Haney (24-0, 15 KOs) is back in action for the first time since November 2019 after injuring his right shoulder in seeing off Alfredo Santiago in the first defense of his belt in LA. The 21-year-old sensation had successful surgery on the injury and is now ready to resume his quest to dominate a 135-lbs. scene that’s littered with big names.

First on his hit list is Gamboa (30-3, 18 KOs), the former unified World Featherweight king and Cuban hero, following his Olympic gold medal. Gamboa is aiming to become a two-weight World ruler at the third attempt having challenged Terence Crawford and Gervonta Davis for their titles, but Haney is confident he will reignite his reign in style.

“Yuriokis Gamboa is a dangerous and experienced fighter,” said Haney. “He’s a former unified world champion, and he has been in the ring with some of the best. He hurt Terence Crawford with a big shot, so his power is not to be ignored. He beat Orlando Salido who beat Vasiliy Lomachenko. Less than a year ago he took Gervonta Davis into the 12th round, something no one has ever been able to do. Gamboa is a true warrior and I’m not taking him lightly. I’ve called out all the top names, and I finally got someone who will challenge me for my title. I intend on making a statement in this fight. My hunger is on another level. It’s time to show the world who the best fighter in boxing is and that’s me!”

“I’m extremely thankful to God for allowing this fight to happen and for the miracle of healing my Achilles,” said Gamboa. “I’ve been dreaming and wishing of fighting for the WBC Green Belt ever since I was an amateur in Cuba. I’m ready and determined to win this title for my fans and to prove those who wrote me off as a washed up fighter wrong. I came up short against Davis because of my Achilles in the second round, but I fought the rest of the fight on one foot, hurting him in the middle rounds. You are going to see a healthy Gamboa fight with both of my legs, fists and warrior heart of mine. With God’s blessings I will come out victorious Nov. 7.”

I can’t wait for our U.S. return in Florida – two stacked cards with plenty riding on them.

Jacobs and Rosado have built up a rivalry over the last year and now that comes to a head three weeks after Haney vs. Gamboa.

Jacobs (36-3, 30 KOs) made the first steps on his target of becoming a two-weight World champion with victory over Julio Cesar Chavez Jr. in Phoenix, Arizona in December. That was the “Miracle Man’s” first foray into the 168-lbs. scene after the two-time World Middleweight king moved up from 160 lbs. after his unification clash with Canelo Alvarez in Las Vegas in May 2019.

Rosado (25-12-1, 14 KOs) appeared on the undercard in Phoenix and clashed with Jacobs ahead of the weigh-in. The Philly ace recorded a ten round points win that night to return to winning ways following his thrilling back-and-forth battle with Maciej Sulecki on home turf in March 2019, and the 34-year-old will be out to fire himself into contention for the World title clash that Jacobs seeks.

“Gabe talked his way into this fight and now it’s time to see if he can back it up,” said Jacobs. “He’s got a big mouth and he’s been bringing up my name constantly for over a year – but on Nov. 27 the talking stops and I can’t wait to shut him up. My aim is to become a two-weight division World champion in 2021 and that starts with a big win in Florida. After that, I’m ready to step up and fight one of the World champions at 168 pounds.”

“I’m really excited for the fight,” said Rosado. “There’s been a lot of back and forth between me and Jacobs, and for the fight to finally happen, I’m more than ready. I’ve started training camp with Freddie Roach in LA at Wild Card Boxing, and I’m just looking to put on one hell of a show for the fans. I’m definitely going to bring the fight to Danny and it’s going to be great.”

Both events have stacked undercards in support of the main event. There’s a Heavyweight flavor to the Haney card with Croatian talent Filip Hrgovic (11-0, 9 KOs) facing American Rydell Booker (26-3, 13 KOs) and Chinese star Zhilei Zhang (21-0, 18 KOs) meeting another American in Devin Vargas (22-6, 9 KOs). Three young stars continue their pro journeys on the bill as Reshat Mati (7-0, 5 KOs), Raymond Ford (6-0, 2 KOs) and Arthur Biyarslanov (6-0, 5 KOs) are in action on the show – and Matchroom are delighted to announce the signing of French star Souleymane Cissokho (11-0 7 KOs) to a multi-fight deal and he’ll box on the bill, and more details on the deal for the Anthony Joshua managed Super-Welterweight will come on Monday.

Marc Castro will make his pro debut on the undercard of Jacobs vs. Rosado. The Fresno talent was slated to make his bow in the paid ranks in Tulsa, Oklahoma in August, but he tested positive for COVID-19. Now the amateur sensation finally laces them up and is joined on the undercard by fellow amateur rulers in Olympic gold medalist Daniyar Yeleussinov (9-0, 5 KOs), three-time World amateur champion Magomedrasul Majidov (2-0, 2 KOs), and young talents Nikita Ababiy (9-0, 6 KOs) and Alexis Espino (6-0, 4 KOs).

“I can’t wait for our U.S. return in Florida – two stacked cards with plenty riding on them,” said promoter Eddie Hearn. “The Lightweight division is on fire and there’s no better time for Devin to return to action and make a big statement at the Hard Rock. Although Devin may well be the next big thing, when you look at his CV, Yuriorkis is by far his toughest test to date. A few weeks later, the bad blood between Daniel and Gabe will come to a head as they clash, and the winner of that fight will find themselves in a great position for a World title shot at 168 lbs. in 2021.”

“There’s so many interesting plotlines on both undercards. The Heavyweights are in the spotlight on Nov. 7, with Filip and Zhilei, two World-class fighters that are looking to stake their claims for massive fights next year, as will Magomedrasul who fights on Nov. 27.”

“Marc was devastated that his debut was postponed but the Fresno sensation has re-focused and it’s not a bad thing to have to learn to cope with a setback like that – he’s been working so hard in training, and I think we’re going to see a spectacular debut.”

“We’re lining up a big test for Daniyar, and so many of the young stars on the cards are beginning to get to the stages in their career where they move to the next level so I am expecting two exciting nights of action in the Sunshine State.”

Hard Rock Live and Seminole Hard Rock Hotel & Casino Hollywood in Florida have a rich history of hosting world-class boxing in addition to globally recognized entertainment acts like Jerry Seinfeld, Alicia Keys and Aerosmith. The venue is excited to play host to two huge nights of action in November.