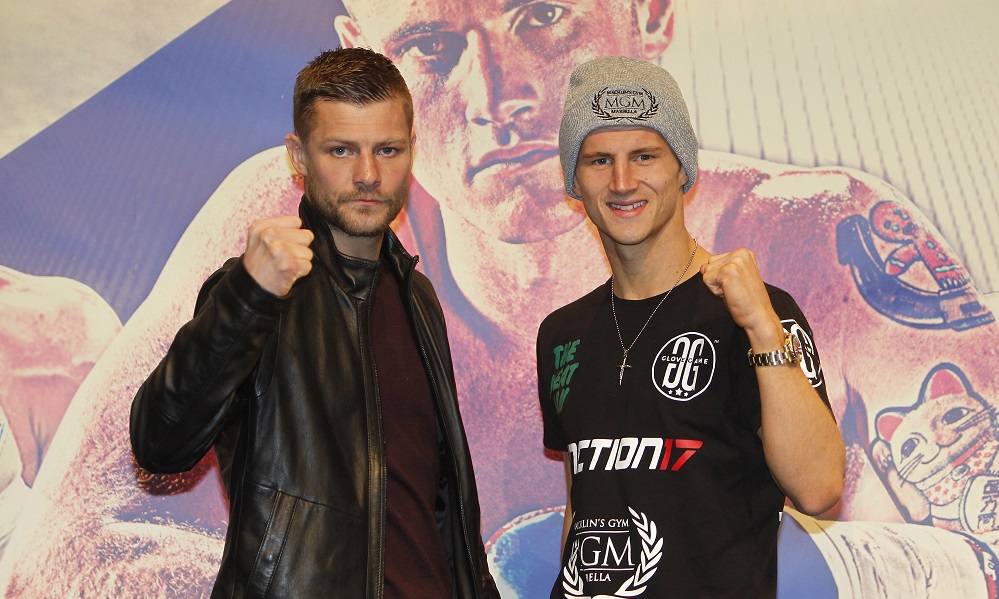 Hibbert defends the titles against Martin, with the pair having sparred hundreds of rounds down the years, but they are putting their friendship to one side this weekend in this crucial battle at 140lbs.

Both men enjoyed fantastic years in 2015, with Hibbert following a cracking January win over Tyler Goodjohn by gaining revenge on Dave Ryan in September following their fight of the year battle in May. Martin claimed impressive wins over Ricky Boylan, Terry Needham and Michael Devine to move to 13-0 – and both men are targeting a big win live on Sky Sports to commence their assault on more titles in 2016.

“I’ve got no bad feeling towards him – it’s just business,” said Hibbert. “I know I’m going to win, I’ve trained hard, everything has gone smoothly, I’m just going to get in there, beat him, keep my titles and then we can be pals again. We’re about to fight each other now so there’s nothing to say. I’m not looking at any other fight – I know this is a hard fight and it needs to be my sole focus.

“We’ve both sold a lot of tickets which is great for January and I appreciate everyone who has put their hand in their pockets after Christmas to come to the show. This is about the fight though not who sells tickets, there’s a lot on the line this weekend. The fans can drag you over the line when it gets hard and I am sure that they will be in great voice on Saturday night.

“I found it easy to get into this shape and that’s down to my nutritionist and strength and conditioner. We’ve been away in Tenerife and I’ve been eating great and still on the weight. We went back to Spain and I’ve come back and I’m bang on the weight, I totally trust those boys to steer me in the right direction and I feel fantastic.”

“The press conference was quiet because its fight time now,” said Martin. “All the talking is done and I think that we are both looking forward to the fight. He thinks he’s going to win and I think I am going to win, so we are both itching to get in there and prove that. Winning would mean the world to me, people keep saying it’s another step-up, it’s too soon – I’ve had that in my last few fights. They’ve all been for titles and they’ve all been called step-up fights. That’s the aim of the game though – to keep stepping up. You are meant to fight the best and that’s what I am in the game to do. John Wayne Hibbert is one of the best in Britain and I want to beat him and take his belts.

“A lot of people are talking about this being the fight of the night and there’s been talk about the atmosphere being electric because of the amount of tickets we’ve done, so I hope that we can deliver something that matches that expectation – I am sure that we will. I wouldn’t be here if I didn’t think I’d take those belts home this weekend, and John knows that too.

“I enjoy all the build-up, it’s all fuel to my fire and I’m lapping it all up, it’s been fantastic – and there’s a lot more to come from me.”

Hibbert and Martin clash on a huge night of action in London as Super-Middleweight star George Groves returns to action against Andrea di Luisa.

Tickets are on sale now priced £40, £60 and £100 available from www.seetickets.com by calling 08712307148 (Calls cost 10ppm plus your network access charge) £200 VIP tickets are available exclusively from www.matchroomboxing.com