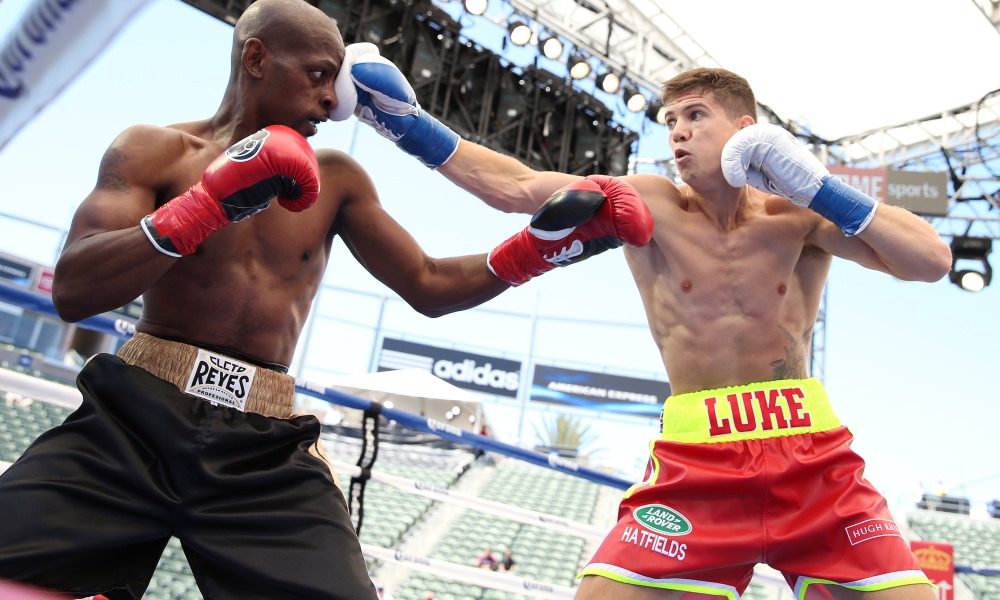 Hibbert: Fans Will Roar Me On In Huge Test

John Wayne Hibbert says his fans will be the key as he takes a big step up to face Leonardo Esteban Gonzalez for the vacant WBC International Light Welterweight title on Saturday night at The O2, live on Sky Sports.

Hibbert had hoped to be in a domestic clash on the bill with a host of Britain’s up and coming Light Welterweights in action, but instead he has landed a huge chance to leapfrog those rivals and move onto better things by facing the Argentine who has knocked out 15 of his 22 victims.

“I know this will be a hard fight but it is a golden opportunity for me to win a big title and I am ready for it,” said Hibbert. “I know he has a good knockout record but he hasn’t boxed outside of Argentina too much and I am not fazed by him. I am ready, I have trained hard and I am ready to take him apart.

“You always have to be wary in there because it is boxing and everybody can be dangerous, but he does look like he is quite heavy handed but I believe he is coming up from Lightweight. Although I have to be careful of his power, likewise he needs to be careful of my power.

“I will be in there to bring the title home and with my brilliant support in there on the night, I’ll have the crowd behind me which will be massive as he’s fighting in the UK for the first time so I want them to make it hostile for him.

“I have had a look at videos of him and my trainers have had a better look. My coach has set up a game plan and I just to go out there and execute it.

“When the Southern Area title fight came up for the summer I wanted to get that as a stepping stone, because like every British boxer my aim is to win the British title so that fight would have been a stepping stone for me but it fell through and instead I fought for a Masters title. Once I win this WBC belt tonight I believe I would be way passed Southern Area level.”

The 29 year old has his hands full with Gonzalez, but while he knows that victory opens plenty of doors for him, his desire to fight the winner of the English title battle between Ricky Boylan and Tyler Goodjohn remains strong – especially as he wants to finally get his hands on the former.

“Boylan has avoided the fight with me a couple of times, so whether or not that comes off will be another matter,” said Boylan.

“I will sit on the fence on that fight because I don’t think anybody has seen the best of Ricky yet. I think it will be a very good fight and if I get offered the winner then it is another title fight for me and I would be more than happy to take it, but I am very confident that I would beat both of them.”

On Saturday in Leeds, Derby’s Dave Ryan edged out Tyrone Nurse to claim the vacant Commonwealth title and blow the division wide open, and Hibbert would be out for revenge if he could meet Ryan for the title after feeling he lost unjustly to him in March 2013.

“I would like to fight Dave,” said Hibbert. “He had a great win at the weekend beating Tyrone Nurse, who a lot of people thought was unbeatable in the Light Welterweight division. I boxed Dave Ryan last year and got a very dodgy decision from the referee and I want to put that right.

“There is a bit of grudge there because he has got the nod over me before, which was very debatable although that wasn’t down to him. It would make a very good second fight and there could be some big titles on the line. It would be a fight I would be very confident I would win. I’d fight Dave Ryan tomorrow.

“The division is buzzing at the moment. You have them all; you have Chris Jenkins, who is a very, very good fighter, myself, Tyrone Nurse, Darren Hamilton, Dave Ryan is back in the mix now, it is a really exciting division and a division I am really happy to be a part of. I genuinely believe that I am the best at 10st but that is just like the rest of the guys I mentioned will believe they are the best at 10st.

Hibbert’s clash with Gonzalez is part of a huge night of action at The O2, where Lee Selby faces Joel Brunker in a final eliminator for the IBF World Featherweight title and Olympic hero Anthony Joshua MBE fights for his first pro title against Denis Bakhtov, with the winner landing the vacant WBC International Heavyweight strap.

Middleweight contender John Ryder tackles Theophilius Tetteh for the vacant WBO Inter-Continental belt, and there are more three cracking Light Welterweight bouts between Boylan and Goodjohn, Philip Bowes and Joe Hughes for the vacant Southern Area belt and Tommy Martin and Matty Tew meet in an eliminator for the English strap. Erick Ochieng, Ohara Davies and Ben Hall are also in action.