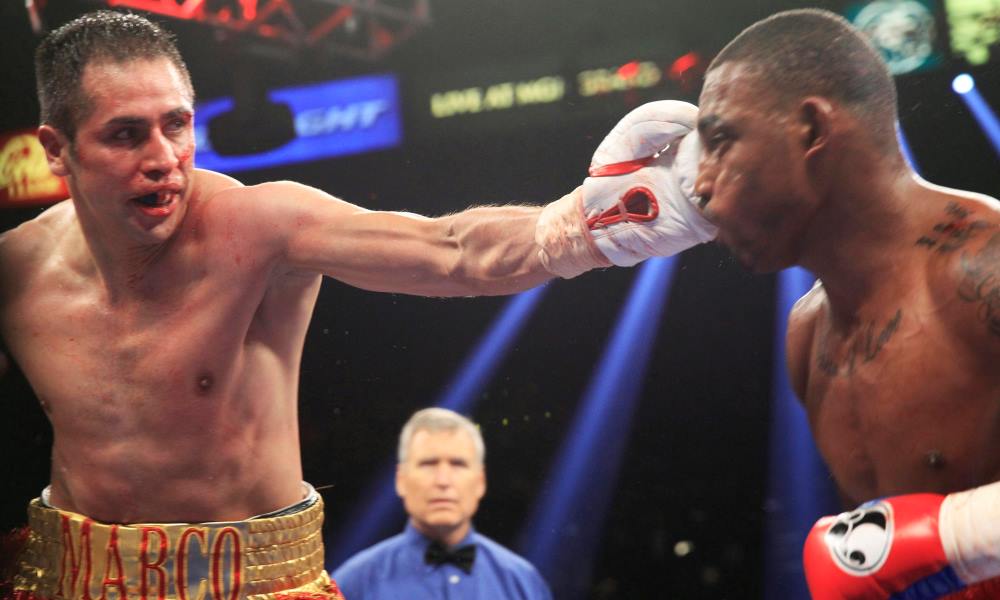 Hibbert: If Martin Thinks Spars Were ‘wars’ – He’s In For A Shock

John Wayne Hibbert has laughed of Tommy Martin’s claims that their sparring sessions were ‘wars’ – and said he cannot wait to silence the young pretender at the Copper Box Arena in London’s Queen Elizabeth Olympic Park on January 30, live on Sky Sports.

Hibbert defends his Commonwealth and WBC International Super-Lightweight titles against Martin, his friend and sparring partner for the fight of the year battles with Dave Ryan last year for the belts he defends in east London.

Essex man Hibbert is aware that Martin, ten years his junior, has the backing of the bookmakers and fans in the fight, but warned the 21 year old that he will not be taking his titles away and that he is in for a rude awakening if he thinks their sparring sessions were tough.

“I read the other day that Tommy said our sparring sessions were ‘wars’ – I’ve got news for you pal, they weren’t wars!” said Hibbert. “If you think they were wars then come January 30, you are in for a massive shock.

“We had good sparring sessions and they were competitive but whatever he brings to the table I have the answer for. He has said that he is expecting us to have a war – I think that will be mistake as it will be a short night.

“The bookies and many on social media have Tommy as the favourite going in to this fight – maybe the feel he is too young and too fresh but they will be losing a few quid on fight night.”

Hibbert landed the belts in a rematch with Ryan at The O2 in September after their epic battle for the same straps in May, having come out on top in a tussle with Tyler Goodjohn earlier in the year – big fights that has put Hibbert at the top end of the Super-Lightweight division and in line for more major title shots, if he sees off the challenge of Martin.

“It’s the second consecutive year I’ve missed Christmas as it’s be slap-bang in the middle of camp,” said Hibbert. “I had a busy 2015 with the Tyler fight and then the two wars with Dave.

“The May fight with Dave was an absolute classic. I dropped him twice and he won in the ninth – fair play to him. The recent one in September I’ve had some stick off his fans for on social media – yes, he was injured, but even the referee said he was completely gone and it was the right decision to stop the fight.

“Some might argue if the shoe was on the other foot – would he have reacted differently? We will never know. You can never say never when it comes to myself versus Dave – who knows what the future holds.

“Tommy has my undivided attention though – some people believe I may be overlooking him and assuming he is just young, but that is not the case – I’ve grafted hard and ready to do a number on him.”

Hibbert’s clash with Martin is part of a huge night of action in east London as Super-Middleweight star George Groves takes on Italian Andrea Di Luisa for the vacant WBC International title.