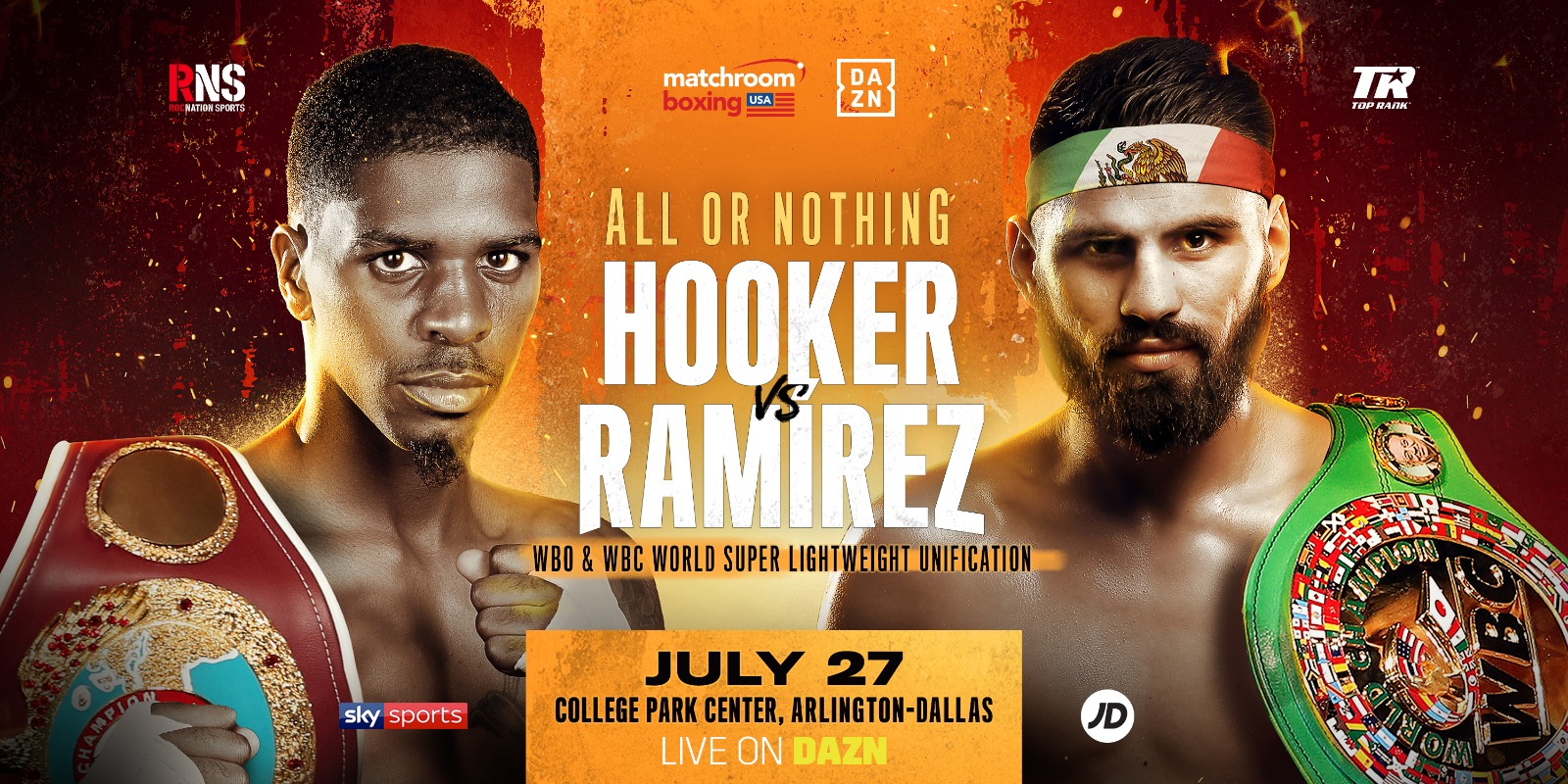 Maurice Hooker and Jose Ramirez will clash in a World Super-Lightweight unification clash on Saturday July 27 at the College Park Center in Arlington, Texas, live on DAZN in the US and on Sky Sports in the UK.

WBO champion Hooker (26-0-3 17 KOs) fights in his home state for the first time as a World champion having won the title in stunning fashion in Oklahoma in November, getting off the canvas to KO Alex Saucedo in his backyard, the widely outpointing Mikkel LesPierre in his first defense in Verona, New York in March.

WBC ruler Ramirez (24-0 16 KOs) puts his belt on the line for the third time having landed the vacant strap in March 2018 against Amir Imam in New York. The 2012 Olympian handed a first defeat to Antonio Orozco in his first defense at home in September at the Save Mart Arena in Fresno, California, and then edged a majority decision against Jose Zepeda in February in the same venue.

“First of all I want to thank my promoters Matchroom Boxing and Roc Nation for getting me this opportunity,” said Hooker. “I’m proud to display my skills on DAZN – the best boxing platform out there. I’d also like to thank my team who are with me every step of the way. I want to show the world that I’m the best in the 140 lb. division. My dream is to become the undisputed champion in my weight class. This unification fight with Jose Ramirez is a major step towards that goal.

“Training camp for Team Mighty Mo Hooker is well underway and I’ll be at my absolute best on July 27 to take the green belt from Ramirez. It will be a thrill to do this in front of my home crowd and I’m looking forward to the energy they’ll bring to the ring. I am a dream killer, and Ramirez will be my next victim coming July 27.”

“I am ready for my opportunity to unify the titles,” said Ramirez. “To get the opportunity to be a unified champion is a blessing for me. I’m thankful to Bob Arum and Top Rank for believing in me to go out there and get the job done. I’m going to push myself hard to make the team proud.”

“This is a fight I wanted. I told my manager, Rick Mirigian, that I wanted to fight Maurice Hooker. I know this fight can take my career to the next level. I want to continue making statements at 140 pounds. I want to make it easier for people to decide who the best 140-pounder truly is.

“I’m treating this fight the same as when I won the title in New York City against Amir Imam. He was the taller fighter, the bigger fighter. It’s sometimes easier fighting someone in his backyard because it takes away some of my responsibilities behind the scenes. As the underdog, I have everything to win. It’s not just about defending my title but unifying the division as well. I’m ready to prove myself and show everyone what Jose Ramirez is all about. I can’t wait to bring Hooker’s title back with me to California.”

“I’m delighted to announce this excellent unification match-up between two great champions in Maurice Hooker and Jose Ramirez,” said promoter Eddie Hearn. “These are the fights that boxing needs and the styles will gel into a real fight of the year contender. Both champions believe they have the edge in this fight, tune in July 27 on DAZN to find out comes out on top.”

“This looks like a terrific battle, and I’m predicting that our guy, Jose Ramirez, will emerge as the unified champion.”

“This is a big fight for Maurice and our team,” said Roc Nation’s Dino Duva. We have been looking forward to it since he became a champion – a title unification match in his hometown, doesn’t get any better for a fighter and his team. Mighty Mo will seize this opportunity to win over the hearts of the great Mexican boxing fans. A victory over a fantastic champion like Jose Ramirez will catapult Mighty Mo into superstar pound for pound status! Big thank you and congrats to DAZN and Matchroom Boxing for stepping up and putting this unification match together. Additional thanks to Top Rank, Ramirez promoter for making it work. This is what great boxing is about.”

“We’re thrilled to deliver another title unification bout to DAZN subscribers this year,” said Joseph Markowski, DAZN EVP, North America. “Credit to all parties working together with the fan’s best interest in mind. Hooker vs. Ramirez is the right fight happening at the right time.”

“This was not easy to get done and had many moving parts,” said Ramirez’s manager Rick Mirigian. “It’s the first of its kind in this new era of boxing and I pushed for this since February, I want to thank Top Rank and Eddie Hearn for working through a complex network landscape to make this huge fight happen for the sport.”

An announcement on ticket sales will be made a press conference in Arlington on Friday.