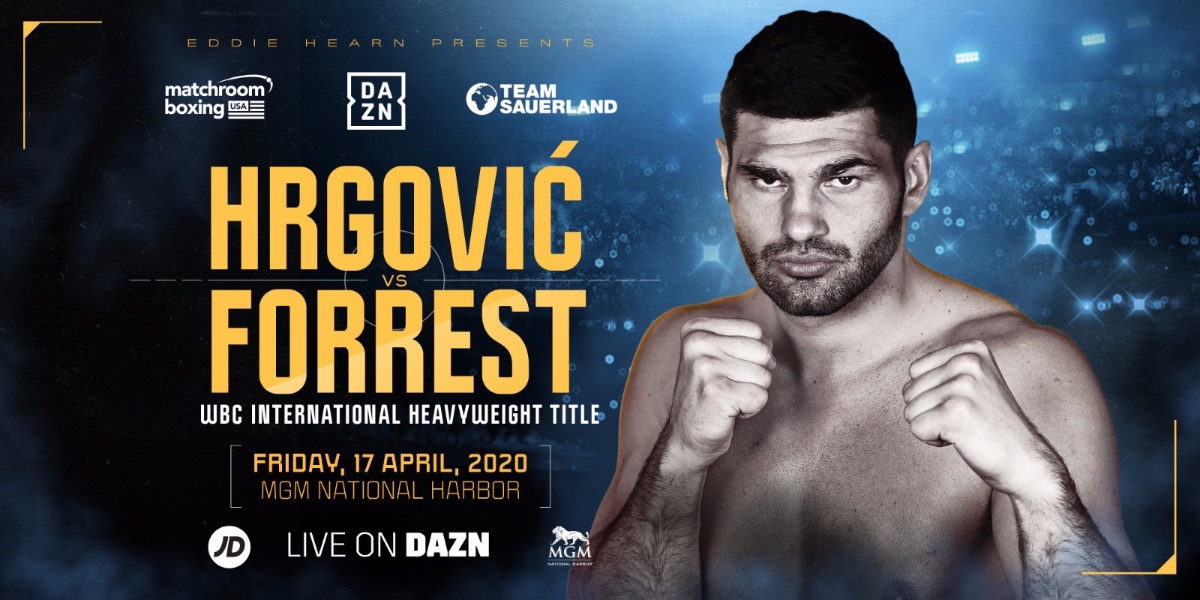 HrgoviĆ And Yeleussinov Step-up In Maryland

Filip Hrgović will take on Jerry Forrest and Daniyar Yeleussinov will meet Julius Indongo in big step-up bouts for the talented pair on Friday April 17 at the MGM National Harbor in Oxon Hill, Maryland, live on DAZN.

TICKETS START AT JUST $43 (PLUS FEES)

Hrgović (10-0 8 KOs) made his debut under the Sauerland-Matchroom Boxing USA co-promotional banner in the same venue in May, hammering Gregory Corbin in the first round in his first defense of his WBC International title, and has added two more big KO wins since then, stopping Mario Heredia in Mexico in August in three rounds and then needing under nine minutes once again to blast away former World title challenger Eric Molina in Saudi Arabia in December.

Hrgović expects tough resistance from Forrest (26-3 20 KOs) in his first fight in 2020, with the Virginia man having ran unbeaten Jermaine Franklin close in July and returning to action in September to record his 20thKO win from 23 fights.

“I am looking forward to getting back in the ring,” said Hrgović. “I have good memories from fighting at the MGM National Harbor. This is where I made my American debut when I knocked out Gregory Corbin in the first round, and I’ve been training hard to give the fans another exciting performance on April 17.

“Jerry Forrest is a good boxer. He is a southpaw with a good record, and I’m expecting a tough fight, but I’m confident I will beat him.

“2019 was a great year for me. I fought in America, Mexico and Saudi Arabia. I had three fights against three strong opponents and got three knockouts wins. This year will be even better. My goal has always been to become World Champion, and I’m now closing in on that goal. I’m coming for belts!”

Promoter Nisse Sauerland said: “Filip is in fantastic shape and ready to start his 2020 campaign in style. Last time out at the MGM National Harbor he introduced himself to the American fight fans with an explosive first-round knockout, and they can expect a similar display this time round. Whenever Filip steps into the ring you’re guaranteed excitement. He is the future of the Heavyweight division and it’s only a matter of time before he’s fighting for World honors.”

Yeleussinov (9-0 5 KOs) looked explosive in his last two outings of 2019, hammering Reshard Hicks inside the opening round of their September clash in New York before stopping Alan Sanchez in the fifth round of their clash in Phoenix in September.

The Kazakhstan 2016 Olympic gold medal man now faces a stiff test of his talents in his first action of 2020 against Indongo (23-2 12 KOs). The rangy Namibian rose to prominence in December 2016 when his stunning first round one-punch KO win saw him rip the WBO World Super-Lightweight title from Russia’s Eduard Troyanovsky in Moscow and then unified the division against Scotland’s three-weight World champion Ricky Burns in Glasgow in April 2017.

The 37 year old faced Terence Crawford for the undisputed Super-Lightweight title in August 2017 and then met former World Super-Lightweight champion and Maryland headliner Regis Prograis in March 2018. Indongo fell to both champions but bounced back with a 12th career KO win in Alabama in August, and Yeleussinov has vowed to shine against the former World ruler.

“This is the most important fight of my career,” said Yeleussinov. “I had a great end to the year, and I feel I am building real momentum in the pro game now, but this is a big leap in quality of opponent. Julius is a former unified World champion and has huge experience at the very top level, so I will need to put on a career-best performance to keep my run going.”

“First of all, me and my partner want to thank Matchroom boxing and DAZN for opportunity like this,” said Yeleussinov’s manager Ziya Aliyev. “It is a step-up fight for Daniyar. He is going to show all his talent and skills. He is going to show everybody that he is the next champion of the world. He is the real deal.”

One of Matchroom Boxing USA’s bright young talents joins Hrgovic and Yeleussinov in the shape of Raymond Ford (5-0 2 KOs), who will be eager to build on an explosive performance in December in destroying Francisco Mura in the first round in Phoenix.

“This is a big night in the careers of Filip Hrgovic and Daniyar Yeleussinov,” said promoter Eddie Hearn. “Filip is a big problem for the Heavyweight division. The Croat is gaining valuable experience with every camp and fight, and all eyes will be on the 27 year old in Maryland as he looks to make another statement in boxing’s glamour division.

“Daniyar is really growing in the paid ranks and has been impressive in his recent outings, but Julius Indongo is a big step-up for the ‘Kazakh Thunder’. The former unified World champion will look to carry his power up to 147lbs so Daniyar will be under pressure to both impress again and stave off the attack of the dangerous Indongo.

“Our young stable of fighters is the best in the States, and Raymond continues his pro education on what promises to be another exciting night of action on DAZN.”

Tickets are currently on general sale now starting at just $43 (plus fees) via Ticketmaster.