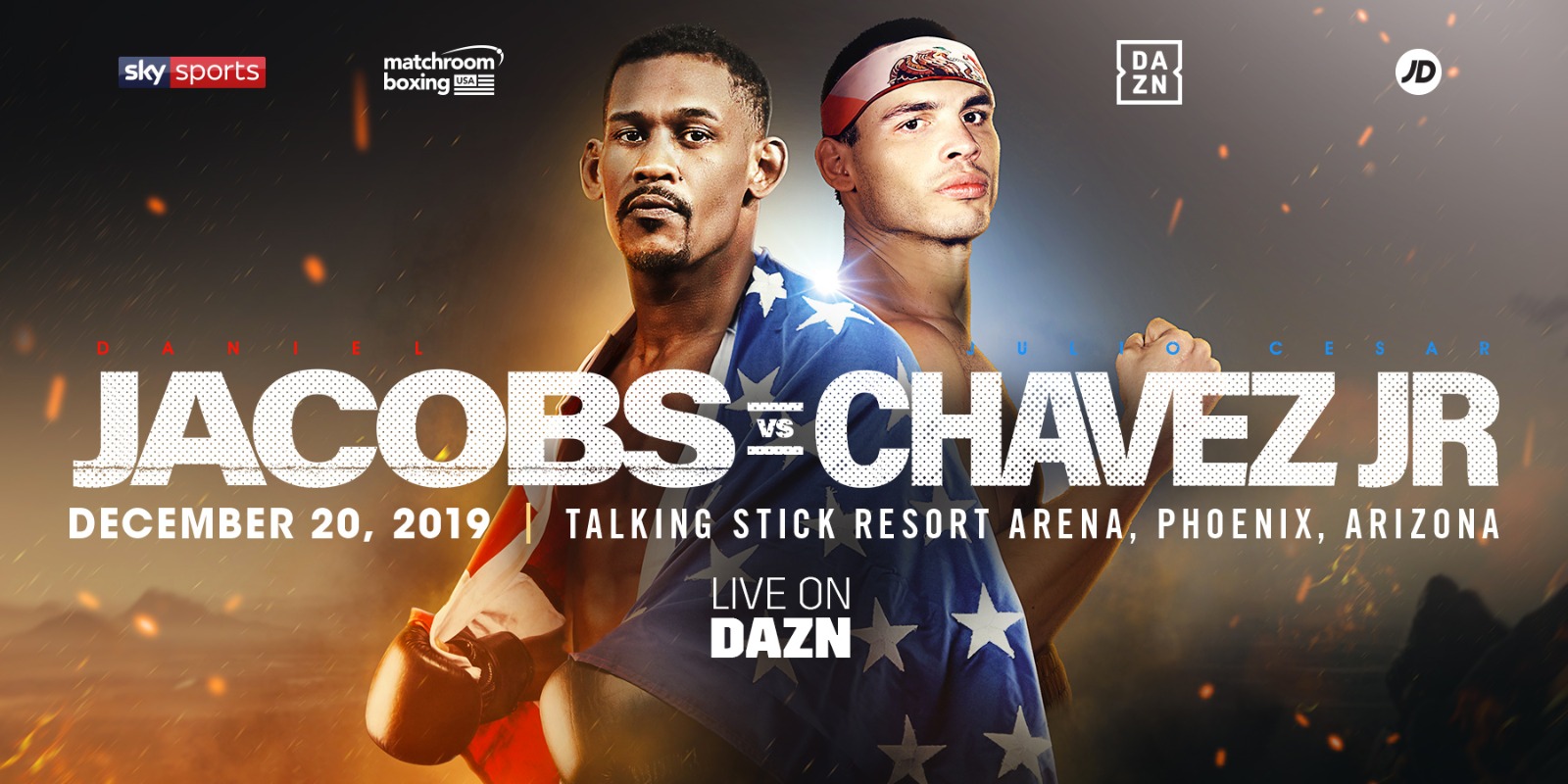 Daniel Jacobs and Julio Cesar Chavez Jr. will clash in a Super-Middleweight showdown at the Talking Stick Resort Arena in Phoenix, Arizona on Friday December 20, live on DAZN in the US and on Sky Sports in the UK.

Jacobs (35-3 29 KOs) makes the move up to 168lbs following his Middleweight unification showdown with Canelo Alvarez in Las Vegas in May, putting his IBF crown on the line against the pound-for-pound Mexican king and WBC and WBA ruler who edged out Jacobs on the cards.

The two-time ruler at 160lbs will make the first steps to becoming a two-weight World champion in Phoenix and does so against Mexican fan-favorite Chavez Jr (51-3-1 33 KOs). It’s a special night for the former WBC 160lb champion Chavez Jr. as he takes on the ‘Miracle Man’ at the same venue his legendary father closed the curtain on his incredible career in 2005.

Chavez Jr. ruled the roost at Middleweight in at the turn of the decade with a record at 160lbs reading as a who’s who of the best at the weight in recent history. The 33 year old returned to action in August with a first round KO win in his 56th pro outing following his own clash with Canelo back in May 2017, and like Jacobs, he sees the Phoenix clash as the first step in adding World titles at 168lbs to his Middleweight crown.

“I am thrilled to be making my debut at Super-Middleweight on December 20 against Julio Cesar Chavez,” said Jacobs. “I’ve achieved a dream of becoming a World champion at Middleweight and now I am seeking to secure my legacy by becoming a two-weight World champion. There are some great fighters and champions at 168lbs and I believe that I will be a different beast up at Super-Middleweight. Facing Julio is a great test for my first fight, he’s a former Middleweight champion like me and he has the same goal as I do – Julio is always in great fight and I am sure that our styles will gel to be a thriller for the fans, and I plan to announce my arrival at 168lbs in style.”

“Going against Daniel Jacobs is the perfect fight for me because there is so much on the line,” said Chavez Jr. “A victory gets me one step closer to a world championship and I’m not going to let anyone stand in my way.

“I know that Danny Jacobs is a former world champion and is a strong fighter with very good boxing skills. Those are the kind of boxers that bring out the best in me. I’ve been working hard in the gym and can’t wait to let everyone see what I’ve been working on. I’m very motivated to get the win and at the end of the night I will have my hand raised in victory.  I ask my fans to believe in me.  I will deliver.”

“I’m delighted to announce this huge fight will close out an incredible 2019 for Matchroom Boxing USA and DAZN,” said promoter Eddie Hearn. “Daniel returns from his point defeat to Canelo to move up in weight on his quest to become a two-weight World champion. He faces a determined Julio Cesar Chavez Jr. who looks for redemption at the site of his father’s last ever professional fight. We expect a great fight, a huge crowd and a stacked card as we’ll look to close out the year in style.”

“As DAZN’s fight season continues, we are thrilled to bring boxing fans a huge super middleweight fight to close out the calendar year,” said Joseph Markowski, DAZN EVP, North America. “Both Daniel Jacobs and Julio Cesar Chavez, Jr. are in a position to prove themselves as title contenders on Dec. 20 and the winner will position themselves for a career-defining fight in 2020.”

An announcement on ticket details will be made next week.