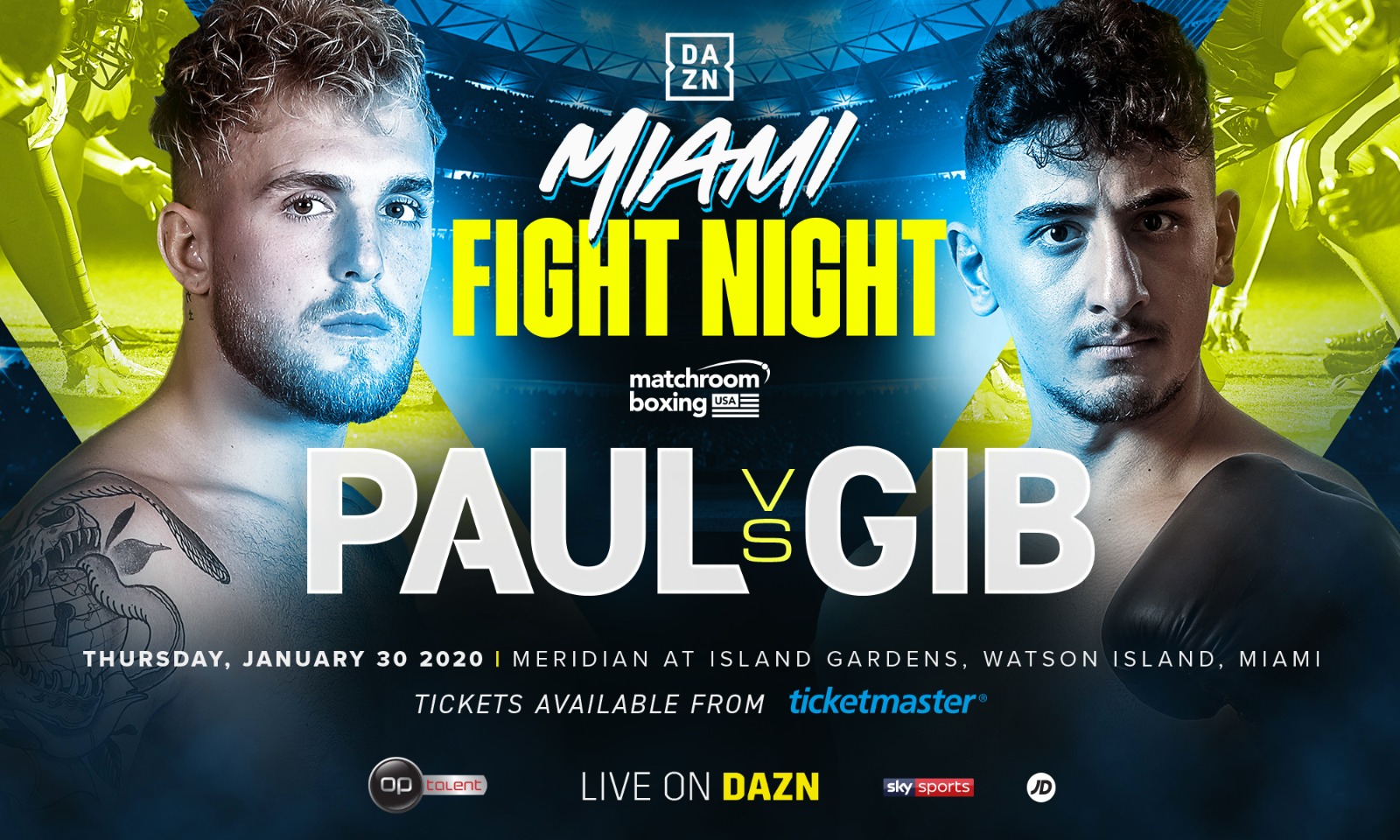 The rumored grudge match between YouTube stars Jake “The Problem Child” Paul and AnEsonGib is finally official and will take center stage as the co-main event of a huge night of boxing from Miami on Thursday, Jan. 30, and streamed live exclusively on DAZN in the United States. DAZN, the world’s largest sports streaming service, and Matchroom Boxing USA will present a special night of boxing which also feature three world championship fights ahead of the big game in Miami.

Jake Paul, 22, is the most viewed internet star in the United States with more than 36 million followers across YouTube, Instagram, TikTok and Twitter. In addition to his huge success as a content creator on social media, the Ohio native, who now calls California home, has flourished as a musician and actor in recent years. Jake made his amateur boxing debut in 2018, where he defeated KSI’s brother.  Along with his brother Logan Paul, who fought KSI on DAZN in November, Jake is passionate about conquering professional boxing and has his sights set on avenging his brother’s loss against KSI in 2020.

“Coming into the sport of boxing as an undefeated champion amongst my peers, it’s my duty to set the bar as high as possible for others looking to cross over into the sport,” said Jake Paul. “This is more than a fight to me, it’s a chance to show the world that anyone with a dream, vision, and the right work ethic, can overcome adversity and shine on the brightest stage. This bout has deep roots; it’s a fight for my brother’s honor, my pride and most importantly my loyal fans who are among the best in the world. This is the American dream. Thursday, January 30, on DAZN, my opponent’s 15 minutes of fame turn into 10 seconds of counting stars as he lays unconscious on the canvas. And then, I’m coming for that wanker KSI.”

AnEsonGib, who is known commonly as Gib, rose to popularity through video gaming, most particularly as a standout FIFA player. He is a member of the famous gaming crew The Sidemen in the U.K., his home country, which also features KSI. Gib, 23, has been linked to a fight with Jake Paul for many months as the two men exchanged words often throughout the KSI vs. Logan Paul 2 promotion. Gib has fought two amateur bouts in the U.K. and will also make his professional debut.

“After six months of Jakey ducking, the fight is finally going down,” said AnEsonGib. “He had no choice of his opponent, I chose him. Since my last fight I have been training nonstop and January 30 in Miami, I will end the fight in devastating fashion and will have my hand raised in front of his country, family and friends. Jake Paul is going to be my walking, talking ad for the rest of his days.”

DAZN presents Miami Fight Night, brought to you by Matchroom Boxing USA will be held at Meridian at Island Gardens. Meridian is a 65,000 square-foot custom built multi-level premier live event and entertainment experience that will play host to additional VIP events. DAZN and Matchroom Boxing USA will kick off the big week at Meridian as the first of three nights of entertainment leading into Sunday.

“We are excited to provide the perfect spot for a night of world-class boxing,” said Jack Murphy of Meridian. “We built Meridian to deliver a unique, one-of-a-kind venue to host events that stand out above the rest and are deserving of first-class hospitality and VIP experience for corporations and the general public alike. We look forward to hosting DAZN, Matchroom Boxing USA, and boxing fans worldwide.”

“January 30 in Miami just became a whole lot bigger,” said Eddie Hearn, President, Matchroom Boxing USA. “After the huge success of KSI vs. Logan Paul 2 which broke broadcast numbers Worldwide and also got nominated as Ring Magazine ‘Event of the Year,’ I’m delighted to add Jake Paul vs. Gib to our World Championship tripleheader on Super Bowl weekend in Miami, live on DAZN. Ever since the last event, people have been sliding into my DMs from all around the World to make this fight so hopefully now I will get some rest at Christmas! Same rules apply, 10-ounce gloves, no headguards and both going through the full professional protocol. It’s USA vs. UK one again! Los Angeles was wild, I have a feeling Miami will be next level.”

“Jake Paul vs. Gib will add a hell of a lot of noise to our Jan. 30 event in Miami,” Joseph Markowski, DAZN EVP, North America. “These men are not just celebrities of the internet; they are brilliant content creators with a proven ability to engage audiences largely ignored by traditional media.”