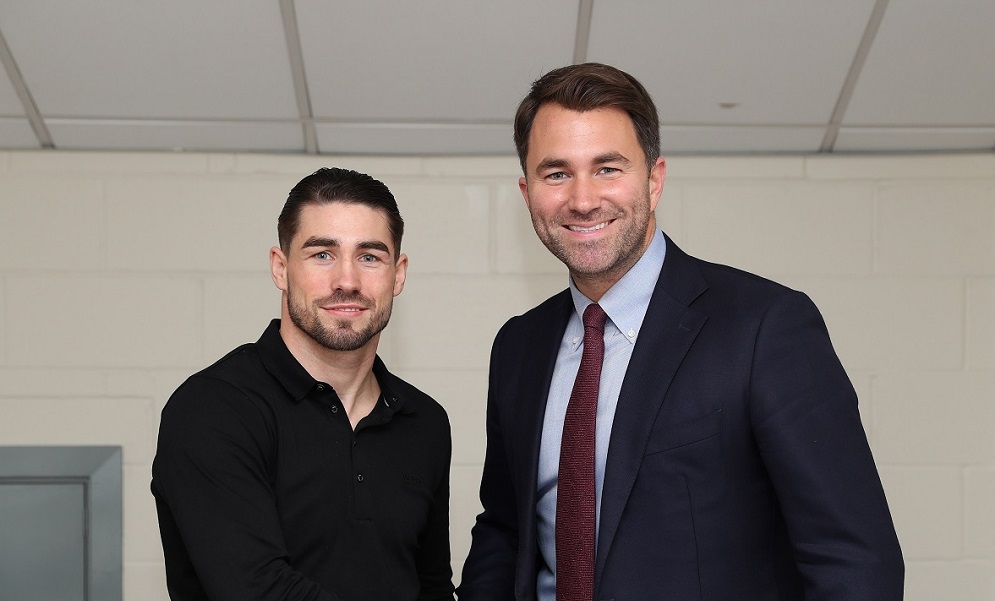 Jamie Cox has signed a promotional deal with Matchroom Boxing.

The Commonwealth Games winner and former Commonwealth Light-Middleweight champion is gunning for major titles and the 30 year old penned the deal in Liverpool at the Echo Arena where he’s a keen ringside observer tonight.

The unbeaten Swindon banger is mandatory challenger for the winner of the clash between Rocky Fielding and John Ryder for the vacant British Super-Middleweight title, and Cox is relishing a clash with the winner as he begins a new chapter in his career.

“I’m excited to be working with Eddie Hearn and boxing on Sky Sports,” said Cox. “It’s a massive platform for me to showcase my skills. Eddie is putting the biggest shows on, especially at Wembley next week, and I want to be part of these huge nights.

“I’ll be boxing in the Super-Middleweight division, I feel strong, fit and explosive at that weight – I’m ready to rip my way through the 168lbers out there. I want to fight a big profile name ASAP, so the public can see what I’m all about. We will then push towards that World title shot in the next year to 18 months.

“I love training. We work under the butchers shop and I go up to the lab with Des Witter in Birmingham, I’m sure that if I play my part right and work hard, I will fulfil my potential with Eddie and Matchroom.

“I’ve been made mandatory to fight the winner of the British Super-Middleweight title fight between John Ryder and Rocky Fielding. I will fight anyone and of course that would be an honour to win that belt. I just can’t wait to get going and get back in the ring doing what I do best!”

“I’m delighted to welcome Jamie to the team and I’m very excited about his future,” said promoter Eddie Hearn. “Jamie is one of the hardest hitting 168-pounders in World boxing and is ready to go in all the big fights.

“He is mandatory for the winner of Fielding vs. Ryder tonight but we are also looking at some major names moving forward. He is brilliant to watch and Sky Sports fans are going to enjoy following his journey over the coming years.”