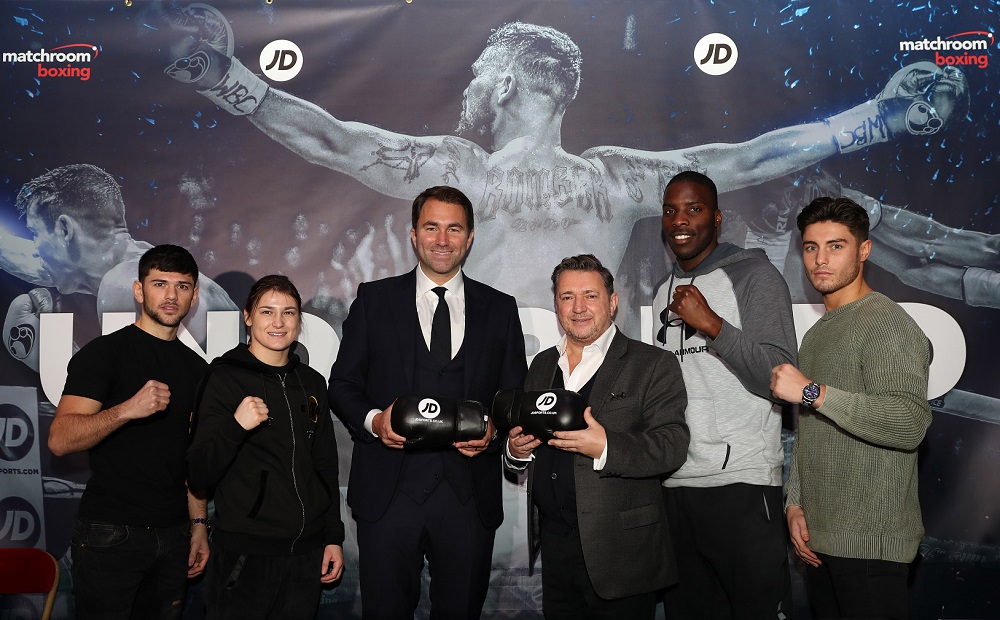 Jd Partner With Matchroom Boxing In First Partnership Of Its Kind

JD will receive significant in-ring and ringside branding for what will be a historic year for British boxing including David Haye v Tony Bellew, Anthony Crolla v Jorge Linares II and the most anticipated bout of the year when the undefeated IBF heavyweight champion Anthony Joshua MBE defends his world title against former heavyweight king Wladimir Klitschko­­­.

The partnership launched ahead of Thursday’s Haye-Bellew fight press conference, in an event expected to produce fireworks from both parties. The Undisputed King of Trainers will host live events with Matchroom fighters to celebrate the partnership across the UK and Ireland. Follow JD Sports on Facebook, Twitter and Instagram for updates.

In addition, JD Sports will play a big part in the promotion of Matchroom’s stable of Olympic fighters including Lawrence Okolie, Joe Cordina, Josh Kelly and Katie Taylor. Matchroom’s NXTGEN series will also feature heavily in the partnership, with JD Sports showcasing future world champions and their fights live on the retailer’s channels.

Matchroom’s fighters will also feature in JD’s Undisputed show, giving viewers behind the scenes access to some of the biggest names in boxing.

The partnership was negotiated by global sports marketing agency SportQuake, who will also activate the boxing campaigns.

JD Sports spokesman Stephen White said: “We are excited to have agreed this long-term partnership with Matchroom Boxing ahead of the biggest year for British boxing to date. What Eddie and his team have achieved over the past five years by putting boxing back centre stage in the UK has been brilliant for us at JD and all fight fans. As the undisputed leaders in our field, we love working with like-minded people. We want to build on our work together and commit to this long-term partnership to support and drive Eddie’s vision for boxing and give our customers what they want.”

Managing Director of Matchroom Boxing, Eddie Hearn, said: “I am delighted that Matchroom Boxing has joined forces with JD Sports – a company that have been partners of ours through the recent explosion of British boxing. JD Sports have continually supported our events and our fighters, and it’s great to be able to plan a future with a retail giant like JD Sports. Their social media content is outstanding and they will help us drive the profile of our fighters both online and in through stores. JD share our passion for the sport of boxing and this ground-breaking deal forms a relationship that will benefit everyone.”