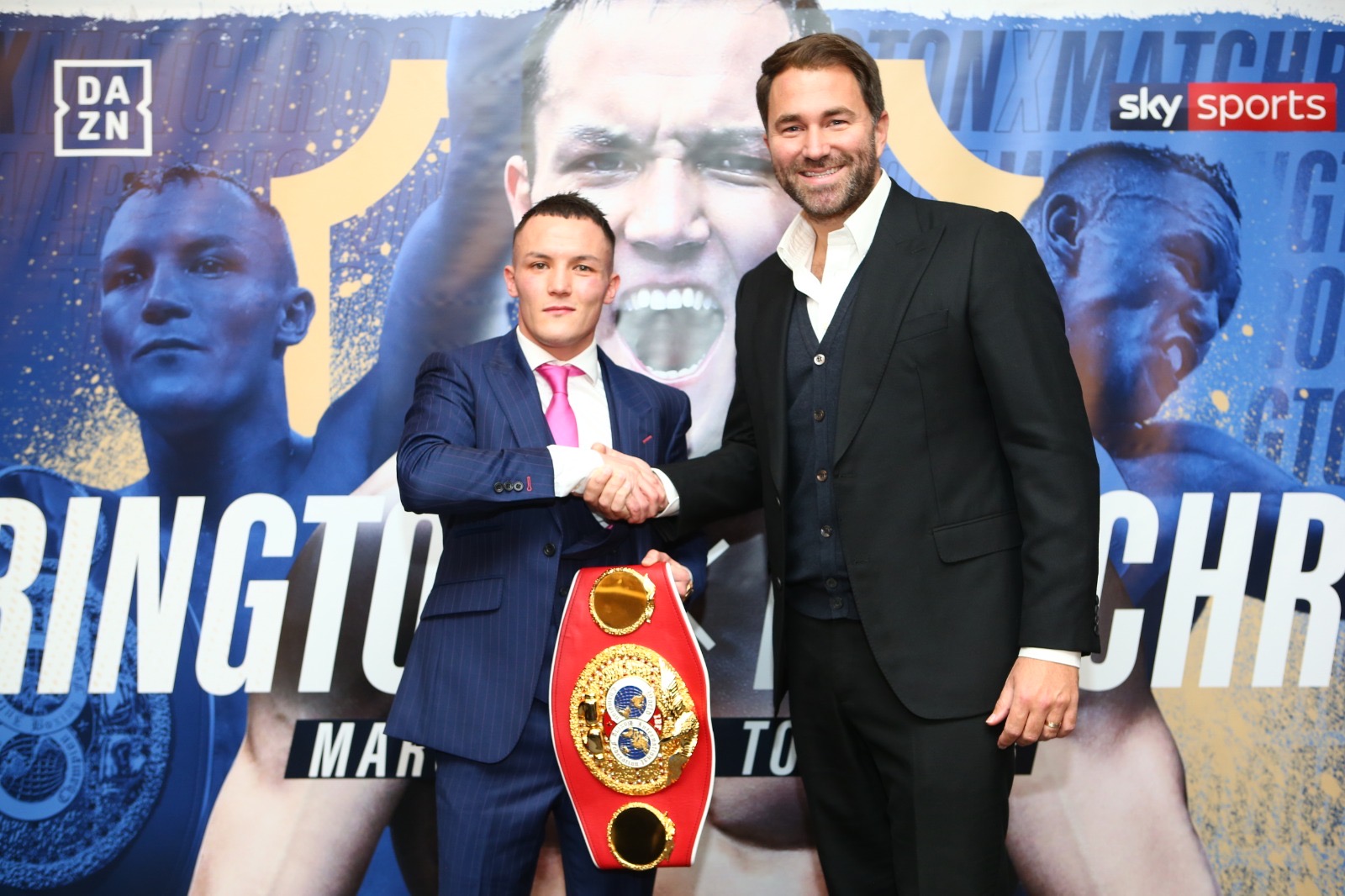 “I am very proud and very happy to welcome the No.1 Featherweight in the world back to Matchroom, Sky Sports and DAZN. It’s funny how life works out, it was a conversation I had with Steve Wood and I asked him, “When’s Warrington out of contract again?”, and it all went from there.

“It’s been amazing to watch Josh’s development since we parted company and I think what he has done has been sensational. The early days looking back at what we started at Leeds Arena are probably some of the most rewarding days of my career. Forgetting the beer that used to come over the tiers onto my head, the atmosphere that you guys generate up here is second to none.

“When you talk about atmospheres, the likes of Carl Frampton in Belfast, Lewis Ritson in Newcastle and I am not just saying that because I am here, but up here really is special. I think it began on a Wednesday night at Leeds Arena and even then you could feel what was growing. Going on to win the British and European Titles there, the crowds were going up and up and we got to a stage where we parted company with Josh and unfortunately I have had to watch these great nights and it was a sickener for me!

“I was watching Elland Road and thinking he won’t be Lee Selby, and fair play it was a great performance and he won that fight in style. Whilst it wasn’t on my show I was proud and pleased for him because of what him and Steve Wood have built from the ground up is special. There was no GB squads or Olympic medals, this was starting in small hall shows winning English Titles. He came to Hull to win the Commonwealth Title and sold 300 tickets and that was a life and death fight at that stage of his career.

“Let’s not forget that Josh is the number one. Check the rankings, check BoxRec and check his resume. What he has achieved in the last year and a half is extraordinary! The Carl Frampton fight was an unbelievable performance and now I feel it’s time to establish that legacy internationally and to have those away days in America. It’s also very important we fight here in Leeds, and the absolute focus has to be the unification fights. He has been there, seen it and done it all so now it’s time to have the major fights here in this great city.

“All the champions have been on the phone to me and for me the unification fight is the target to finalise over the next two weeks. There is also the focus of the American dream, we know that Kid Galahad is the mandatory and at some point that is something that Josh will have to focus on but for now the aim is the big fights here in Leeds. It’s what we feel we have to deliver for Josh and that is key.

“It’s a pleasure to have Josh back, not just one of the best in Britain but one of the best pound-for-pound in the world and now it’s time to prove that so be ready because we’re going to have some crazy nights in Leeds!”

“It’s good to be back and obviously Eddie has missed me and the big nights. This is a long story, it is not something that happens in a short space of time. In the break of the transition I had a chance to develop a little bit more and did what I did in winning the World Title. As I get round to this chapter of my career, it’s created some big opportunities. The unification is the main priority but the away day in America is also on my mind.

“It’s all about making memories for me now and Eddie and Matchroom have the connections in America. There is plenty of fights there for me whether that is down the unification route or fighting my mandatory in Kid Galahad. Eddie has said he will deliver and I believe that he will do so.

“That night at Elland Road will stay with me until the day I die. That was a box ticked and now to fight at Headingley would be so special. Anyone walking out there wouldn’t know what had hit them. Fighting at Headingley will be the last thing for me to achieve here in the UK.

“I want all the big fights because being a part of the big nights is what excites me. I never thought when I first turned pro that I would win a World Title, winning the British crown was my aim. To be here now I feel that I will beat any other Featherweight in this division.

“I don’t want to be remembered as a decent boxer from Leeds, I want to be remembered as a UK great who was a part of special night, not a Champion who had a padded record and padded defences. The fans are a massive part of my journey and there is possibly a higher pressure when you’re fighting at home because of that expectation that is there. My next fight will be something special!”