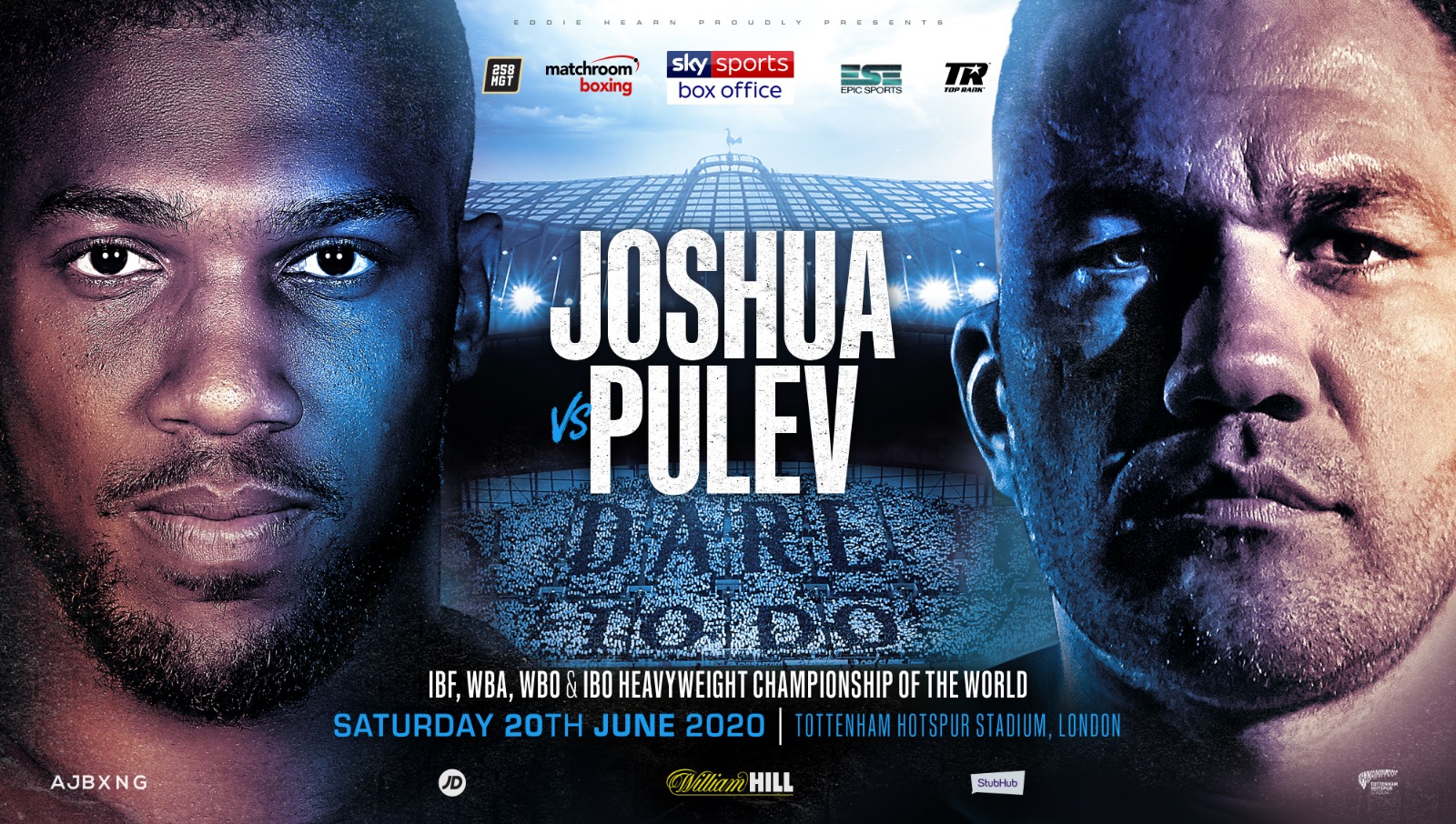 Joshua And Pulev Clash At The Tottenham Hotspur Stadium

Unified Heavyweight Champion of the World Anthony Joshua OBE will defend his IBF, WBA, WBO and IBO World Titles against Mandatory Challenger Kubrat Pulev at the Tottenham Hotspur Stadium on Saturday June 20, live on Sky Sports Box Office, on a show promoted by Matchroom Boxing in association with Top Rank and Epic Sports and Entertainment.

Joshua (23-1, 21 KOs) recaptured his belts and position as the Unified Heavyweight World Champion with a masterful unanimous decision victory over Andy Ruiz Jr at the Diriyah Arena in Saudi Arabia on an historical night in December that saw the Heavyweight World Titles contested for the very first time in the Middle East.

June 20 will be ‘AJ’s’ first fight on UK soil in nearly two years, since he defended his crowns with a devastating seventh round knockout of Russia’s Alexander Povetkin at Wembley Stadium, and the former Finchley ABC man will be aiming to deal with Pulev in style to set up an Undisputed showdown against new WBC Champion and fellow Brit Tyson Fury down the line.

Pulev (28-1, 14 KOs), the IBF’s No.1-ranked Heavyweight Mandatory Challenger, gets his second shot at World honours after his defeat to modern legend Wladimir Klitschko in 2014 – the only loss of his 29-fight professional career. He has won six fights in a row since then, including victories over Derek Chisora and an IBF Eliminator win over Hughie Fury in 2018.

The Bulgarian superstar was set to challenge Joshua at Cardiff’s Principality Stadium in October 2017 but was forced to withdraw through an injury and will now get his opportunity to ruin the champion’s plans to face Fury in an all-British blockbuster showdown in the future.

“On June 20, I am defending my Heavyweight World Titles,” said Joshua. “I’m back in my home city after some time away. A spectacular stadium has been built in North London and I’m honoured to bring the boxing community from all over the world to witness us make history with the stadium’s first Heavyweight World Title fight. The belts go back up in the air and nothing will stop me from being victorious.”

“I am happy to have the opportunity to show the world how strong I really am” Said Pulev. “Becoming the Heavyweight Champion has always been a dream of mine and on June 20, 2020 I will fulfil my destiny!”

“I’m so excited to see Anthony Joshua return to the capital, 70,000 at the Tottenham Hotspur Stadium is going to be very special,” said Eddie Hearn. “2019 was a crazy year that had everything – the only thing missing was a UK fight and as we go into what I believe will be the biggest year of ‘AJ’s’ career so far, all our attention turns to Kubrat Pulev in an absolute must win fight. Pulev is undefeated in six years and his team and especially Bob Arum really fancy this. I think you are going to see something special from ‘AJ’ on June 20 – a destructive performance on the road to undisputed.”

Bob Arum, Top Rank Chairman, said: “Kubrat Pulev has earned his ranking, and he is going to enemy territory prepared to pull off the upset. Ever since Top Rank signed Kubrat last year, I have seen a determined Heavyweight on a mission to win the Heavyweight Title. He has been in this situation before, and he won’t be intimidated by the tens of thousands of Joshua fans at the Tottenham Hotspur Stadium. June 20 is going to be another historic evening in the Heavyweight division.”

John Wirt, President of Epic Sports and Entertainment, said: “This fight has been a long time coming, but we finally have Joshua cornered and on June 20, I guarantee Pulev will be victorious and Great Britain’s recently acquired chokehold on the Heavyweight division Championship will be brought to quick and sudden ending.”

“We’re absolutely delighted about Anthony Joshua’s homecoming World Title fight against Kubrat Pulev at Tottenham Hotspur Stadium, said Adam Smith, Head of Sky Sports Boxing Development. “Pulev is a dangerous proposition, with plenty of top level experience, and ‘AJ’ will need to be at his best to retain his belts in front of his home support.

“We’ve covered every step of ‘AJ’s’ journey, including his impressive rematch win over Andy Ruiz Jr in Saudi Arabia, and now he’s back in Britain at the home of Spurs. I recently visited the stadium and was blown away by the state-of-the-art facilities. It will provide a stunning backdrop for Britain’s Unified World Heavyweight Champion.”

Ticket information will be announced in due course.