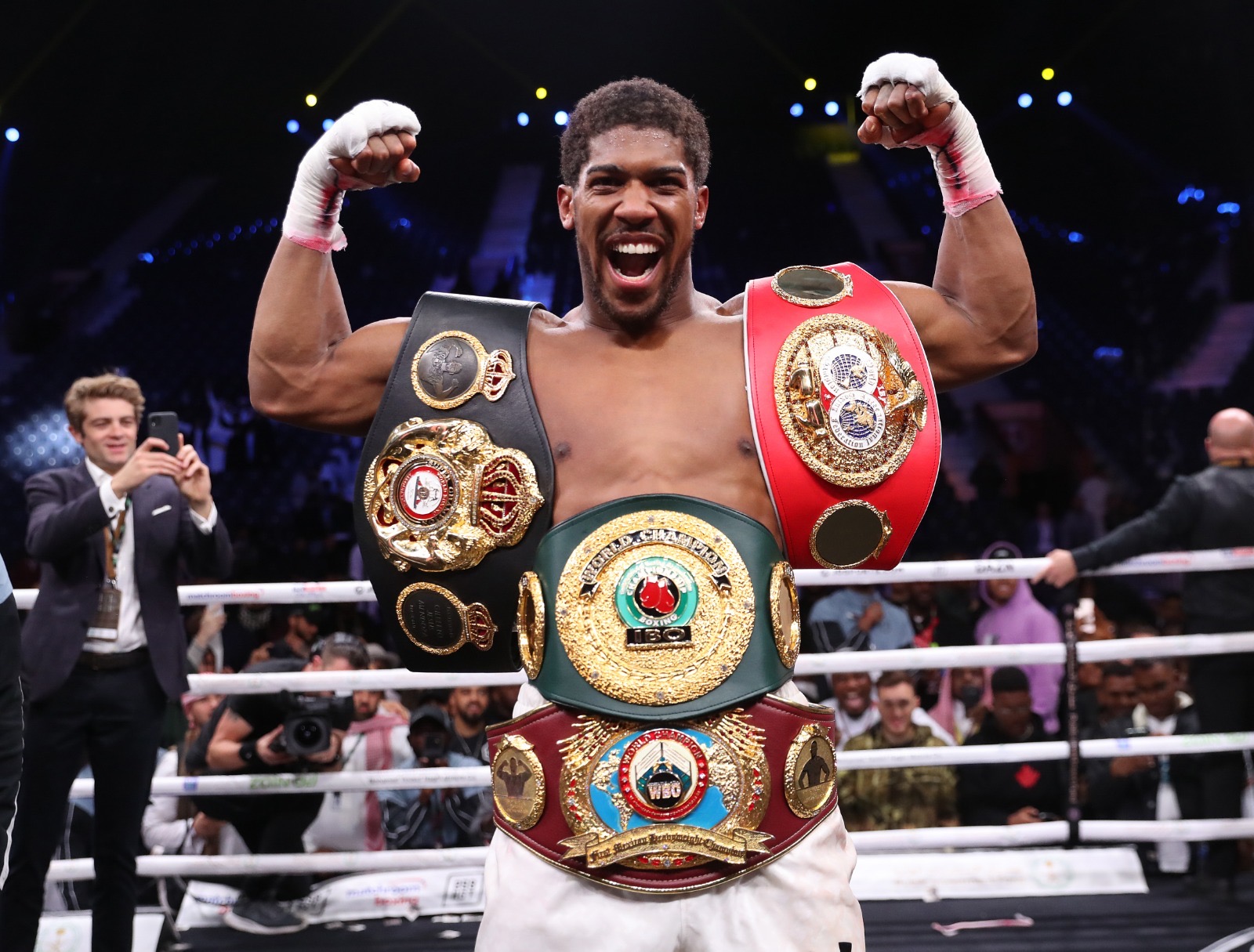 In the biggest Heavyweight fight of the decade, Anthony Joshua OBE (23-1, 21 KOs) recaptured his position as the unified World Heavyweight Champion with a masterful unanimous decision victory over Andy Ruiz Jr (33-2, 22 KOs) in a rematch that captured the world’s attention. In front of thousands of rabid fans at the Diriyah Arena in Riyadh, Saudi Arabia, Joshua exacted his revenge against Ruiz, who six months ago dethroned the undefeated kingpin in epic fashion at Madison Square Garden in New York. Joshua will return to the U.K. as the unified IBF, WBA, WBO and IBO World Heavyweight Champion and now two-time world heavyweight champion.

In the evening’s chief support bout, Alexander Povetkin (35-2-1, 24 KOs) and Michael Hunter (18-1-1, 12 KOs) battled for 12 back-and-forth rounds which resulted in a split draw – the first draw of each fighter’s career. In the ring following the fight, Povetkin and Hunter spoke about their desire for a rematch to settle the score. Heavyweight contender Dillian Whyte (27-1, 18 KOs) delivered an impressive unanimous victory over Mariusz Wach (35-6, 19 KOs) to further enhance his case for a title shot in 2020.

On his performance: “Man, the first time was so nice – I had to do it twice! A man like me don’t make no excuses, my boy Derek Chisora said I could do this if I am ready to D-I-E. And look, this is about boxing. I am used to knocking guys out. Last time, I hurt the man and I got caught coming in. I gave that man his credit. There was no excuses. I respect Andy and his family and his trainers so much. I just wanted to put on a great boxing masterclass and also show the sweet science of this lovely sport. It’s about hitting and not getting hit.”

On any mental changes: “Never a change in mentality. You know the saying, ‘Stay hungry, stay humble.’ I have stayed hungry and I have stayed humble. I am humble in defeat and I will remain humble in victory. Thank you again to Andy Ruiz and his family, to Saudi Arabia and all of the traveling fans, all of my supporters.”

On handling Andy Ruiz’s pressure: “It’s all about preparation. Like I said, one day when I release a book I will walk through my career’s experience. It’s just about creating great memories. I took my L and I bounced back. Life is a rollercoaster. I heard some people say that we should retire if we lose. Hey Andy, are you ready to retire? (Andy: ‘No way, let’s go again.’) Exactly, we are warriors.”

On where this win ranks in his career: “I just want to say I have the utmost respect for Andy Ruiz who beat me fair and square in the first exam. I failed the first time, but I came back and studied hard and passed this time. But this ranks second. The first would be my fight against Wladimir Klitschko. It means so much to me and I learned so much from that fight. I respect Wladimir so much and he gives me so much advice still. This fight ranks number two though.”

On being disciplined in this fight: “I know that my fans like to see me knock people out and I can do that but sometimes with certain fighters you have to box smarter.”

On fighting Deontay Wilder and Tyson Fury: “What can I say? I have been speaking about these guys a long time. You see this time, when I had the opportunity to just focus solely on Andy, my head is in the right place. When Wilder, Fury, Ortiz and Usyk are really ready, they will make the call. Until then, I respect them. I won’t continue to call them out. I am making my own lane and if they want to be a part of that, they will call. Ruiz did it and created a legacy. If those guys want to do it, they can create a legacy too. Look at all I have done, come on. When I call them out and do all of that, I lose focus.”

On his performance: “It was his night. I don’t think I prepared as good as I should have. I gained too much weight but I don’t want to give no excuses. He won, he boxed me around but if we do the third, best believe I will come in the best shape of my life.”

On his higher weight being an issue: “It kind of affected me a lot. I thought I would come in stronger and better. But you know what, next time I am going to prepare better with my team. This time I tried to train myself at times to get prepared but no excuses. Anthony Joshua did a hell of a job. Thanks to everyone in Saudi Arabia who supported.”

On pressuring AJ: “I think I was chasing him too much instead of cutting off the ring. I just felt like I couldn’t throw my combinations. But who wants to see this third fight?”

On what’s next: “We are going to celebrate. Anthony Joshua is an amazing ambassador for the sport. He has given everything to this sport. Tonight, in Saudi Arabia, he becomes the two-time Heavyweight Champion of the World and that is beautiful.

On his performance: “It was an absolute masterclass. He was able to stay disciplined. People have doubted his boxing ability, his endurance. He was humiliated at Madison Square Garden. It was the American coming out party and it was ruined. He could have brushed himself down and went off. Instead he came back and put on that performance and it was beautiful. That’s the sweet science. That was like Picasso on a canvas, paining a masterpiece.”

On Anthony’s comeback: “They wrote him off. They said he was all hype. He had to come back from humiliation at Madison Square Garden. Tonight, he is the governor. The governor of the division.”

On fighting in Saudi Arabia: “We got criticized for coming here but these people have been amazing. The vision they have for boxing in this region is incredible and they delivered.

On AJ becoming undisputed Heavyweight champion: “Tonight is about becoming the two-time Heavyweight Champion of the World. We can talk about that later. We’ve wanted the undisputed for years and years. We will do what Anthony wants to do and he’s always wanted to be undisputed. People listen to rubbish that he doesn’t want it and you know what, we won’t give them this. We aren’t even going to give them the airtime. He is the king. They wrote him off and said he all hype but look, he’s back. He is the king again. He is the one who continues to step up – Tyson Fury and Deontay Wilder’s resume don’t even stack up. They world stopped to watch Anthony Joshua become the two-time World Heavyweight Champion today and it was all live on DAZN, baby.”

On fighting Deontay Wilder and Tyson Fury: “Anthony has been chasing them for years. Those fights will happen. Maybe they were right to walk away from those fights back then because the fight is worth much more now. AJ wants the legacy. He created that legacy tonight in Saudi Arabia. He sells out arenas around the world. He is transforming boxing. These other guys can’t lace his boots! He is only 24 fights in and he is only going to get better.”