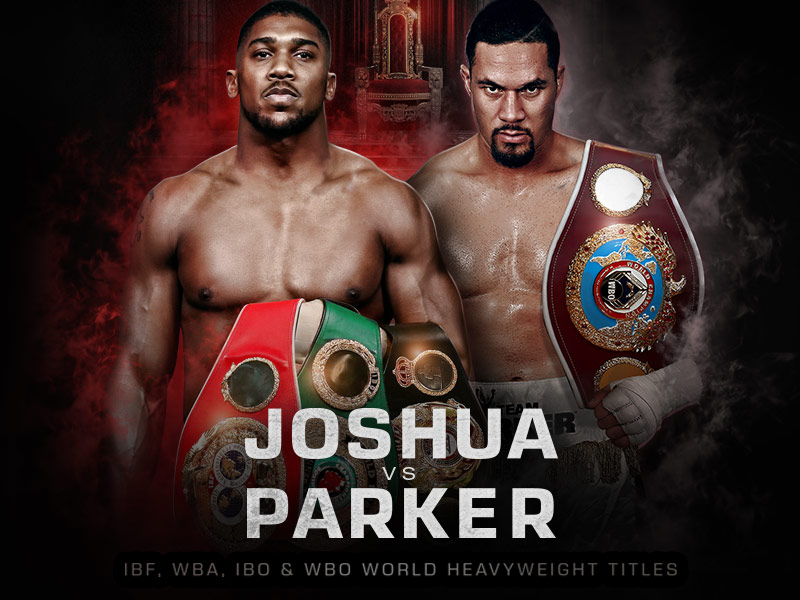 Joshua And Parker Clash On March 31

The Heavyweight unification fight the world has been waiting for between Anthony Joshua MBE and Joseph Parker will take place at Cardiff’s Principality Stadium on March 31, live on Sky Sports Box Office.

Joshua and Parker have agreed to put their IBF, WBA Super, IBO and WBO belts and unbeaten records on the line, ending a period of intense negotiation between the rival camps.

The winner-takes all contest will put the winner within touching distance of becoming the first undisputed Heavyweight champion of the world since Lennox Lewis in 1999.

“It’s a unification Heavyweight Championship fight, everyone knows what happened the last time I was in one. These fights aren’t easy, there’s a lot on the line so respect to Parker for taking the fight. I’m looking forward to it, training camp is under way,” Joshua said.

WBO champion Joseph Parker said he was relieved the contractual negotiations had now been concluded as he could now fully concentrate on the job in hand.

“Anthony Joshua is in for a huge shock,” Parker said. “A couple of months ago I heard him say ‘why should I be worried about this little kid from New Zealand’?

Joshua returns to the scene of his last action in the ring, where Carlos Takam became his 20th win inside the distance from his 20 pro fights, the fourth defence of his IBF crown and first of the WBA Super and IBO belts he landed in his epic battle with Wladimir Klitschko at Wembley Stadium last April.

“I’m delighted to get this fight made – it’s been a long time coming,” said Joshua’s promoter Eddie Hearn. “Champions should fight Champions and AJ continues to step up to the challenges.

“It’s the first time in history that two reigning heavyweight World champions have met in Britain and it’s a classic match-up between two young, fast, undefeated belt holders and it’s going to be an explosive fight. This is another huge unification fight for Anthony as he continues to make history in the quest to become undisputed World heavyweight champion.”

Parker’s last fight was his first in England as he defended his WBO strap for the second time, outpointing Hughie Fury in Manchester in September, moving to 24-0 with the win. The 26-year-old became New Zealand’s first heavyweight world champion when he landed the WBO strap in December 2016 against the undefeated Mexican American star Andy Ruiz in Auckland.

He comfortably defended the crown for the first time against giant Romanian Razvan Cojanu in May.

Parker’s promoter David Higgins paid tribute to Hearn and Matchroom Boxing for the up-front way they had handled negotiations.

“Eddie has been great to work with from day one,” Higgins said. “I know we ruffled a few feathers along the way but, as Eddie acknowledged, when you come from a small country and people perceive you as a small player, sometimes you’ve got to make a bit of noise.

“New Zealand might be a tiny country on the other side of the world but it has a hugely proud sporting tradition – and a particularly strong tradition when it comes to whipping mother England.

“Joseph Parker is the absolute epitome of the Kiwi sporting battler. It has been said that he is punching above his weight, but he didn’t become WBO heavyweight champion by being lucky.

“He’s never been stopped, never even been wobbled in the ring. He’s consistently fought fighters in the world’s top ten and he’s beaten them all easily. It certainly won’t be a shock to me when he beats Anthony Joshua and takes his titles back home to New Zealand.”

Principality Stadium Manager Mark Williams commented: “Joshua vs. Parker is another exciting feat for Principality Stadium which holds the record for the largest indoor boxing crowd after Joshua’s title defence in Cardiff last October. Afterwards it was a case of ‘when’ not ‘if’ boxing would return and we are thrilled to be working with Matchroom once again to raise the bar for live boxing entertainment on March 31st.

“The stadium and Cardiff always come together to put on a fantastic show. Our status and ambition in securing major events is shared with all our city partners and we are grateful to Welsh Government, South Wales Police, Cardiff Council and others working together to attract and deliver the greatest live entertainment to our capital city.

“Inside the stadium, boxing fans can expect yet another spectacular arena transformation, just days after the NatWest 6 Nations and ahead of Judgement Day VI and four nights of Ed Sheeran and more. 2018 is set to be yet another exciting chapter in the stadium’s illustrious history!”

An announcement on on-sale dates, ticket prices and travel packages will be made soon.