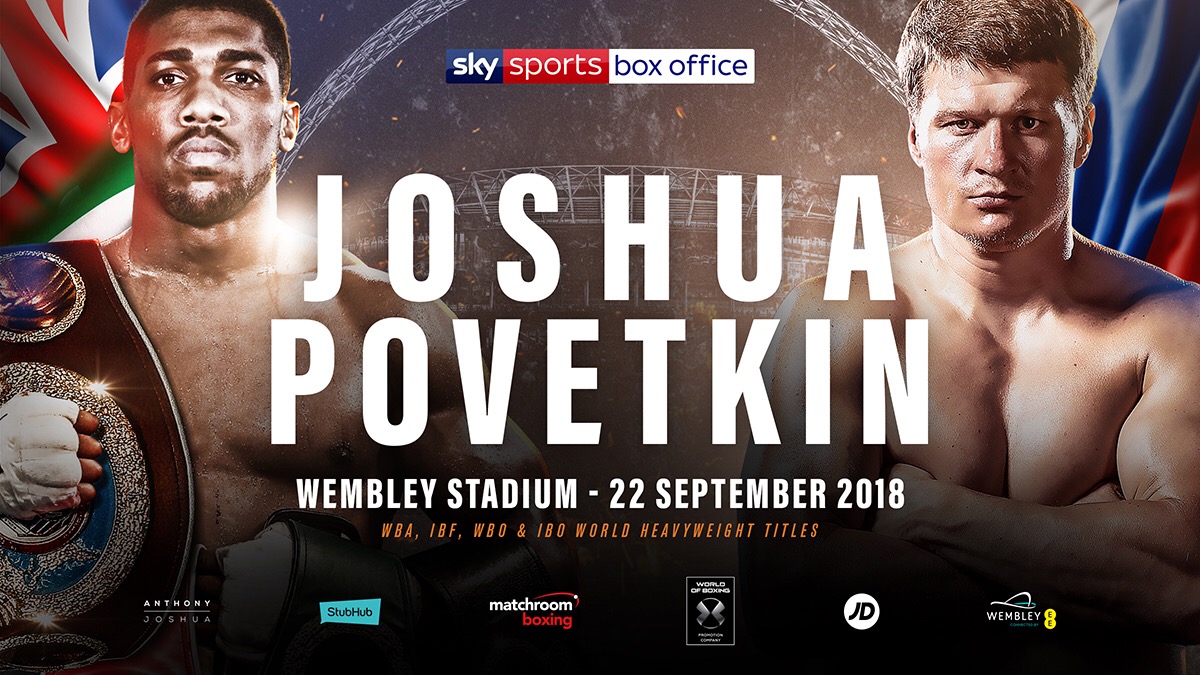 Joshua And Povetkin Collide On September 22

The Heavyweight king returns to the scene of his historical triumph over legendary Champion Wladimir Klitschko in April 2017, where he produced the performance of a lifetime to claim the WBA crown in an unforgettable battle in front of a post war record crowd on 90,000 at England’s national stadium.

The 28-year-old sensation went on to sell out the Principality Stadium in Cardiff twice, defending his belts against Carlos Takam in October before unifying the division by taking Joseph Parker’s WBO belt in March and is now thrilled to be back under the iconic Wembley arch for what promises to be another blockbuster night.

“I can’t wait to get back in the ring, the end of March feels a long time ago now,” said Joshua. “Povetkin is a serious challenge that I will prepare meticulously for. He has serious pedigree and only a fool would underestimate what he brings to the table.

“Training hasn’t stopped for me, but the next 10 weeks ahead will be intense both mentally and physically. I will push myself to breaking point to make sure I am in peak condition for another huge night for British boxing at Wembley Stadium on September 22nd.”

Former WBA ruler Povetkin earned his shot at Joshua when he spectacularly defended his WBA Inter-Continental and WBO International titles with a brutal fifth round KO of Liverpool’s David Price last time out on the Joshua v Parker undercard.

Now the Russian powerhouse is aiming to overthrow the biggest name in boxing when he fights in England for the first time in his career.

“The battle for the World title has always been my goal,” said Povetkin. “I fought for the moment to face the strongest in the World and on September 22nd I get my opportunity. Anthony Joshua has four belts and I want them all. I’m glad that our fight will finally take place, the meeting of two Olympic Champions in the ring is destined to be a breath-taking event.”

“I can’t wait to return to Wembley on September 22nd for what I believe will be one of the biggest tests of AJ’s career,” said Joshua’s promoter Eddie Hearn. “Last time he was there he produced one of the most dramatic fights and endings in the history of the sport and I expect this fight to be full of energy and drama – Povetkin is a Top 3 Heavyweight and extremely dangerous but in AJ I see the best Heavyweight in the World today and I think we will see a major statement.

“It will be another huge night for British boxing with major championship fights on the card and another one of those special nights and atmospheres that will be watched by millions all around the World.”

Povetkin’s promoter Andrey Ryabinskiy commented: “The fight between Joshua and Povetkin is one of the biggest fights that can happen in the Heavyweight division today! This is a colossal battle of two Olympic Champions and it is sure to be an unforgettable night of boxing. I am delighted that Alexander is getting his chance to not only become a World Champion again, but to challenge for the throne of the Super-Heavyweight division.”

An announcement on on-sale dates, ticket prices and travel packages will be made this week.